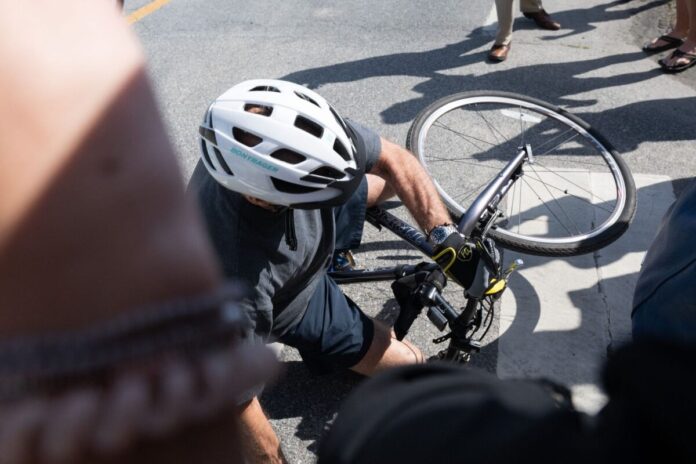 President Joe Biden fell off his bicycle on Saturday as he approached a group of members of the public during a ride in a state park near his home in Rehoboth Beach, Delaware, with the White House saying the president is “fine” following the spill.

Video shared on social media captured the moment Biden approached a cheering group of well-wishers on his bike before coming to a stop and appearing to get his foot caught on one of the pedals’ toe clips on dismount.

He fell over and hit the pavement, eliciting gasps from the onlookers.

“I’m good, I’m good,” Biden said after Secret Service agents swarmed the 79-year-old commander in chief and quickly helped him up, according to a separate video shared on Twitter.

“I got my foot caught” in the toe clips, Biden added.

A White House official told the press pool that Biden was uninjured and “looks forward to spending the rest of the day with his family.”

Biden and First Lady Jill Biden were finishing up a morning ride in the Gordons Pond area on the Delaware shore when the president pedaled over to a group of well-wishers standing on the roadside and fell.

The incident recalled several past spills taken by the president. Biden has slipped and fallen on the stairs of Air Force One several times and, most consequentially, had to wear a medical boot for several weeks when he fell after chasing his dog and tripping on a rug.

The Bidens marked their 45th wedding anniversary on Friday and are spending the long weekend at their Rehoboth Beach home.

After the tumble, Biden spoke to reporters briefly, telling them that he plans to speak with Chinese leader Xi Jinping in the near future and that he’s considering taking action on U.S. tariffs imposed on China by former President Donald Trump.

“I’m in the process of making up my mind,” Biden said when asked if he had decided to roll back any of the Trump-era measures, Bloomberg reports.

Trump imposed the tariffs as part of an effort on his part to recalibrate trade relations between the two countries, which the former president repeatedly described as unfair toward the United States.

Deliberations on a rejig of the tariffs come as the United States faces the highest inflation in 40 years and as members of the Biden administration have said removing some of the measures could help ease price pressures.