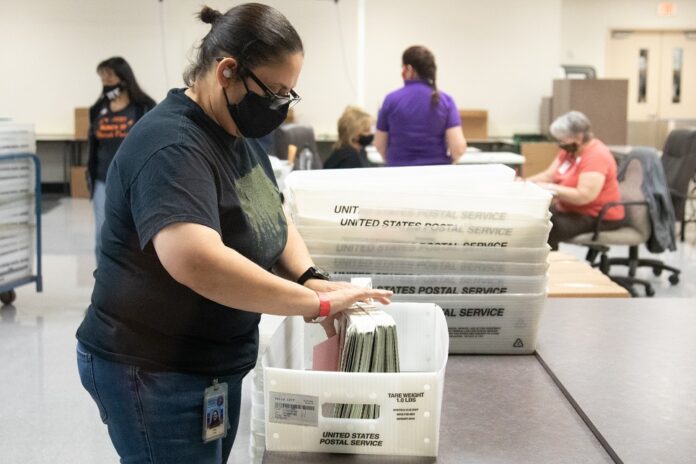 A superior court judge rejected the Arizona attorney general’s request to revamp election rules for the 2022 election cycle, citing timing as the reason for the rejection.

“At this point in the game, there is no mechanism for the Court to assist the parties in constructing an EMP  which complies with [the law] within the timelines of the statute,” Napper wrote in Friday’s ruling, reported The Associated Press. “The Complaint was filed far too late for this to occur without disrupting elections that have already begun.”

The judge’s rejection marked the end of the AG’s complaint first filed against Hobbs in April, in which he alleged that Hobbs refused to make changes in the elections procedures manual and did not provide him with a “legally-compliant” election procedures manual by Oct. 1, 2021, as required by Arizona state law.

“This case is about the Secretary’s ongoing violation of her mandatory statutory duty to promulgate an Elections Procedures Manual (“EPM”) for the 2022 election cycle,” reads Brnovich’s court filing dated April 21. “To cure that ongoing violation, Plaintiffs are entitled to special action relief ordering the Secretary to comply with the mandatory requirement of providing a legally-compliant EPM to the AG and Governor for approval.”

Brnovich asked that the court order Hobbs to amend the election procedures manual by adding election integrity measures, including prohibiting unstaffed drop boxes, requiring signature verification for non-mailed early ballots, and preserving the requirement that voters vote in their precinct, according to a June 10 statement on the AG’s website.

He called the situation especially “problematic” because the election procedure manual has the “force of law.”

“Regardless of individual politics or party, everyone should understand the importance of maintaining public confidence in our elections,” Brnovich said. “I brought suit to support confidence in the integrity of our elections and accuracy of the results.”

Arizona is becoming a focal point for election integrity issues as the 2022 midterms approach. Earlier this month, the state’s Senate and House lawmakers heard evidence and allegations from election integrity organization “True the Vote” pertaining to a statewide ballot harvesting campaign during the 2020 presidential election.

The hearing presented evidence of cellphone tracking data showing that more than 200 devices had visited ballot drop boxes in two of the state’s largest counties no less than 5,700 times during the 2020 election.

Catherine Engelbrecht, founder and president of True The Vote, said the group’s investigators settled on 10 visits as “outlier behavior” on the side of too many visits to the ballot box. In Arizona, however, they found that each alleged ballot harvester went an average of 21 times each. She called it “extreme outlier behavior.”

Two days after the hearing, the AG concluded the prosecution of Guillermina Fuentes, former mayor of an Arizona county, for voter fraud charges. Fuentes pleaded guilty to using her position in the Democratic Party to illegally harvest ballots in a ballot abuse scheme.

“Based on our research, the ‘Arizona model’ is one that is followed across the country, and it involves national organizations,” Engelbrecht told The Epoch Times earlier this month, referring to alleged widespread ballot harvesting.

“So we, the American people, need to continue the pressure on to continue investigations moving forward to get to the bottom of what’s happening, not just in Yuma County, Arizona, but in many counties across this country.”