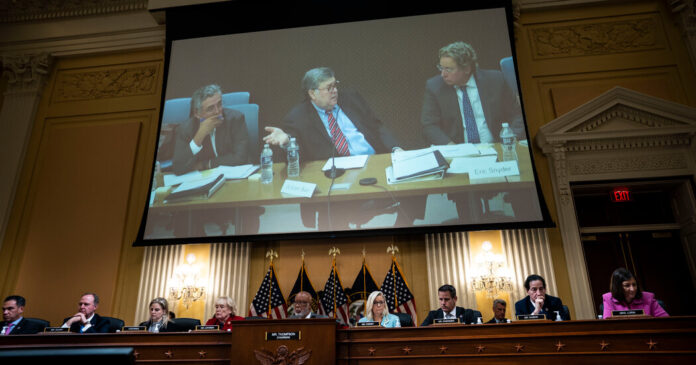 The House select committee investigating the Jan. 6 riot has been trying to draw more eyes to its televised hearings by uploading clips of the proceedings online. But YouTube has removed one of those videos from its platform, saying the committee was advancing election misinformation.

The excerpt, which was uploaded June 14, included recorded testimony from former Attorney General William P. Barr. But the problem for YouTube was that the video also included a clip of former President Donald J. Trump sharing lies about the election on the Fox Business channel.

“We had glitches where they moved thousands of votes from my account to Biden’s account,” Mr. Trump said falsely, before suggesting the F.B.I. and Department of Justice may have been involved.

The excerpt of the hearing did not include Mr. Barr’s perspective, stated numerous times elsewhere in the hearing, that Mr. Trump’s assertion that the election was stolen was wrong. The video initially was replaced with a black box stating that the clip had been removed for violating YouTube’s terms of service.

“Our election integrity policy prohibits content advancing false claims that widespread fraud, errors or glitches changed the outcome of the 2020 U.S. presidential election, if it does not provide sufficient context,” YouTube spokeswoman Ivy Choi said in a statement. “We enforce our policies equally for everyone, and have removed the video uploaded by the Jan. 6 committee channel.”

The message on the video page has since been changed to “This video is private,” which may mean that YouTube would allow the committee to upload a version of the clip that makes clear that Trump’s claims are false.