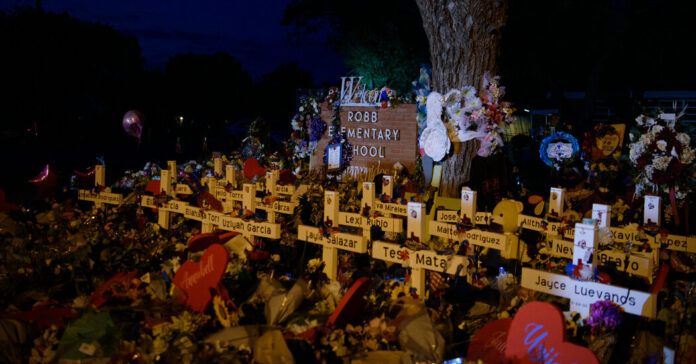 UVALDE, Texas — A city police officer armed with an AR-15-style rifle hesitated when he had a brief chance to shoot the gunman approaching a school in Uvalde, Texas, because he did not want to hit children, according to a senior sheriff’s deputy who spoke to the officer.

The fateful decision, which has not been previously reported, represented the second missed opportunity for officers arriving at Robb Elementary School to prevent a massacre by intervening while the gunman was still outside the school. Officials have said that an officer from a different department, the Uvalde school district police force, arrived early but drove past the gunman, not seeing him in the parking lot of the school.

The quick arrival of several officers on May 24 reflected the speed with which the initial response took place, and contrasted sharply with what would become a protracted delay in finally confronting the gunman after he began shooting inside a pair of connected fourth-grade classrooms.

It also made clear the agonizing decisions law enforcement officers had to make as they confronted the gunman, who was firing shots outside the school; the officer who arrived with a rifle had only seconds to make a decision, and feared that firing his weapon could have meant hitting children, the senior sheriff’s deputy said.

Two teachers and 19 children were fatally shot after the gunman entered the school, and 11 were wounded, including a teacher.

The police response is now the subject of at least three investigations by the Texas Rangers, the U.S. Justice Department and a special committee of the Texas Legislature. A local district attorney has also been involved in the state’s investigation and has been handling media inquiries; she did not respond to a request for comment on the new details about the earliest stages of the police response.

The Texas Department of Public Safety, which includes the Rangers, referred questions to the district attorney. The Uvalde Police Department, whose officer was said to have had line of sight on the gunman, did not respond to a request for comment.

A central focus of the inquiries has been the one hour and 17 minutes that elapsed from the time the gunman entered the classrooms and began shooting at 11:33 a.m. until a team of Border Patrol agents and a sheriff’s deputy from Zavala County entered the rooms and killed the gunman at 12:50 p.m.

The investigations are now showing that several officers arrived at the school before the gunman ever went inside, rushing to the scene after the first 911 calls around 11:29 a.m. reported that a truck had crashed near the school and that its driver was outside shooting.

At least two law enforcement cars arrived in close succession at the school, according to investigatory documents reviewed by The New York Times. One was driven by an officer from the small police force that patrols Uvalde’s schools. Another arrived less than a minute later, at 11:32 a.m., with officers from the Uvalde Police Department.

At that point, the gunman was still shooting outside of the school.

Officials have said he was firing at the building and toward a nearby funeral home, but arriving officers believed in the moment that the gunfire was directed at them, said Chief Deputy Sheriff Ricardo Rios of Zavala County, who also responded to the shooting in the neighboring county.

“My understanding, after talking to several officers that were there, was that the gunman engaged two City of Uvalde officers when they got there, outside the building,” Chief Deputy Rios said.

He said the two officers, including one with the long gun, took cover behind a patrol car. They wanted to return fire, he said, but held off.

Chief Deputy Rios, recounting his conversation with one of the officers, said that he was surprised and replied with a blunt question.

“I asked him, ‘Why didn’t you shoot? Why didn’t you engage?’ And that’s when he told me about the background,” he said. “According to the officers, they didn’t engage back because in the background there was kids playing and they were scared of hitting the kids.”

In one of the initial 911 calls, at 11:29 a.m., a caller told dispatchers about the gunfire outside and also that there were children running, according to the documents. It was not clear where those children were or if there were others in the line of fire in those first minutes.

The chief deputy sheriff said that any attempt to shoot the moving gunman would have been difficult, and that the officer would undoubtedly have faced harsh criticism and possibly even a criminal investigation had he missed and hit a bystander in the distance, especially a child.

The chance passed “really quick” he said, perhaps in a matter of seconds.

“I’m not bashing him or anything. I get it,” he said. “The Ranger who took my statement even said: ‘It’s come to the point where we’re second-guessing ourselves shooting somebody because we’re scared. Every bullet has our names.’”

On the day of the shooting, Chief Deputy Rios raced to the school in Uvalde along with his boss, the sheriff of Zavala County, Eusevio E. Salinas. As they were going, they learned that one of their off-duty deputies, Jose Luis Vasquez, was already en route.

Deputy Vasquez eventually ended up on the team of officers who later stormed the classrooms and killed the 18-year-old gunman, Salvador Ramos.

At the time when the shooting began, Deputy Vasquez had been heading to the gym in his department truck, dressed in a T-shirt and shorts. He rushed to the school anyway, Sheriff Salinas said. His daughter was a student at Robb Elementary, the chief deputy sheriff said.

Sheriff Salinas said he and Chief Deputy Rios arrived at the school at some point after 12 p.m. to find a chaotic scene, with both uniformed law enforcement and plainclothes officers responding.

“I saw a guy in street clothes carrying a shotgun,” Sheriff Salinas said. “I immediately pointed my gun at him, but a female officer popped up right beside him, so I said, ‘Wait a minute, this might be an off-duty officer.’” (He later learned that the man was an off-duty Border Patrol officer who had been at a nearby barbershop and borrowed the weapon from the barber.)

He said officers had established a perimeter around the school, and he saw, beyond that, a truck belonging to Deputy Vasquez, its lights flashing. He said he and Chief Deputy Rios remained outside the building until after the gunman, who used an AR-15-style rifle in his attack, was killed.

“We were there for assistance. The radio was pretty silent. It was real strange,” the sheriff said. “There was neighbors across the street, a lady watering her plants, another man working on his yard. Like nothing. Like nothing.”

Sheriff Salinas said he did not realize until later that his other deputy had been part of the team responsible for killing the gunman. He still did not know how it ended up that way, he said. Deputy Vasquez declined a request for an interview.

Chief Deputy Rios said his fellow deputy and others had been pressing to go in earlier and confront the gunman. “He told me that they wanted to go in,” he said. “He was saying, ‘Let’s go in, let’s go in.’”

Investigators are still looking into the reason for the long delay.

State officials have said the incident commander was Chief Pete Arredondo, who leads the small school district police force and has jurisdiction over the schools. He said in an interview with The Texas Tribune that he did not consider himself in charge of the response. Through his lawyer, Chief Arredondo declined a request for an interview.

Documents reviewed by The Times show that several ballistic shields had arrived at the school by noon, but that Chief Arredondo had been focused on getting a key to the classrooms where the gunman was holed up.

It was not apparent from the documents or video reviewed by The Times that anyone had checked the doors to see if they were locked.

By 12:46 p.m. Chief Arredondo told officers in the hallway outside the classrooms, who included Deputy Vasquez, who was armed with an AR-15-style rifle and protected by a bulletproof vest, that they could go in. “If y’all are ready to do it, you do it,” Chief Arredondo said, according to a transcript of body camera footage reviewed by The Times.

The team of officers took a key that had been located, turned it in the door and entered, Chief Deputy Rios said, citing information from his fellow deputy.

“Joe says it like this, he goes: ‘Rick, it was quiet. I just scanned really quick, and I just heard the door squeaking open, creeeeeeek,’” said Mr. Rios, referring to a closet door inside one of the classrooms, Room 111. “‘And then he just started shooting at us, bop bop bop bop bop.’”

As the gunfire inside the classroom began, a Border Patrol agent with a ballistic shield lowered it to the ground to protect the team’s legs, Chief Deputy Rios said. Deputy Vasquez was just behind the Border Patrol agent, pointing his gun around one side of the shield.

Deputy Vasquez reported that after he had fired several shots, his gun jammed. But the other officers continued to fire, separated by only several feet from the gunman.

Immediately after the gunman’s death, other officers and medical workers rushed to help the wounded.

“I remember they had a small child and they were working on her, CPR, chest compressions, and taping her,” Sheriff Salinas said, adding that he had kept his distance. He did not know if the girl survived.