The Iconic Morro Bay Smokestacks Are Coming Down 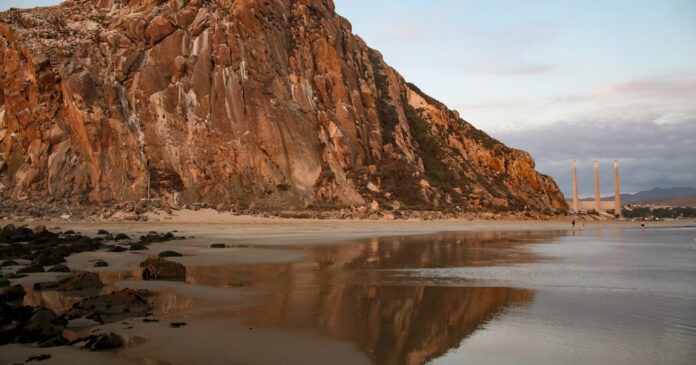 MORRO BAY, Calif. — From the shore of this otherwise quaint fishing village rises a pair of imposing landmarks, one built by nature and the other by man.

There’s Morro Rock, a 581-foot volcanic mountain that lends its name to this Central Coast town. And staring back at it a half-mile inland are three 450-foot concrete smokestacks, from which the community gets its local nickname: Three Stacks and a Rock.

For more than half a century, the two icons have together come to represent Morro Bay, their likenesses reproduced on sweatshirts, postcards and even tattoos. But soon, the dramatic skyline here is set to change.

The power plant for which the stacks were built shut down in 2014, and Morro Bay officials last year approved a plan to remove the defunct stacks, instead of spending millions to maintain and perhaps renovate them. “For a city that struggles to make sure its streets are paved, it didn’t make sense to take that on,” the city manager, Scott Collins, told me.

The decision was divisive, as some locals view The Stacks, as they’re called here, as an integral part of Morro Bay’s identity and charm. Collins estimated the town’s roughly 10,000 residents were evenly split on “whether they love it or hate it.”

Even those who support tearing down the stacks feel somewhat nostalgic about them. Rodger Anderson, 72, remembers watching through his elementary school classroom window as they were built.

“You get used to them,” said Anderson, who served four years as mayor. “When we were kids and we’d been out of town, we in the back seat of the car were having a contest of who could see the smokestacks first.”

That meant, he said, that they were almost home.

The Morro Bay Power Plant was built by Pacific Gas and Electric in the early 1950s, and it created a huge number of jobs and a tax base that allowed the city to incorporate despite a postwar recession. It made the school district wealthy and funded new desks and books for students.

The towers became linked to the region’s prosperity and faded into the background, at least for those who saw them every day, Anderson said. “People who were first-time visitors to Morro Bay would say, ‘My god, how did that get there?’”

The Morro Bay Embarcadero, the city’s main commercial strip, overlooks sparkling waters dotted by fishing boats and surfers, but the horizon is dominated by the two impossibly large landmarks. When I visited recently, I ate at a popular wine bar and bistro, in the shadow of the industrial towers. The restaurant was named STAX.

In the eight years since the power plant closed, some have suggested transforming the stacks into a public art project, or perhaps a venue for extreme sports. In San Francisco, the shuttered Potrero Power Plant is being redeveloped into a modern apartment complex and boutique hotel, with its smokestack preserved as a reminder of the region’s history.

But maintaining the Morro Bay stacks probably would have cost the city a million dollars a year, with ultimate renovation or removal an additional several million, Collins said. (The city’s entire annual budget is less than $16 million.)

So the City Council in October voted to cede control of the stacks to Vistra Corp., an energy company based in Texas that now owns the power plant. Vistra plans to build what it says will be the largest battery storage facility in the world, and has agreed to tear down the stacks by the end of 2027. The company is finalizing plans to submit to the city for approval.

When the stacks do come down, the city will install a plaque explaining their significance, Collins said. “It’s absolutely part of the story of Morro Bay,” he said.

Along the embarcadero on a recent weekend, tourists escaped blustery winds by ducking into Three Stacks and a Rock Brewing Company. The taproom’s logo features the Morro Bay coastline, but with the stacks replaced by giant beer bottles.

Occasionally visitors don’t understand the name, one of the owners, Ananda Nettnin, told me, “and we only have to point out the window.” But mostly, customers speak fondly of the stacks, and even buy shirts with the brewery’s logo because of their affection for them.

So, even when the stacks come down, Nettnin said, they plan to keep the name.

“There are many marvelous national parks in California. What makes Point Reyes National Seashore remarkable is that you can leave the amazing metropolis of San Francisco and drive for one hour and discover yourself in true wilderness. Easily viewed mega fauna like elk, whales, elephant seals, harbor seals, all within sight of the S.F. skyline.”

Summer is here. What’s your favorite part of the season in California?

Email us at CAtoday@nytimes.com with your stories, memories or recommendations.

For the first time in more than 35 years, an aardvark pup was born at the San Diego Zoo.

The baby, which has not yet been named, was born May 10, The Associated Press reports. She will remain out of view of zoo visitors for about two months as she bonds with her mother, Zola.

The pup “is very active, and was using her sharp claws to dig like an adult aardvark, just hours after her birth,” the lead wildlife care specialist Cari Inserra said.

Thanks for reading. We’ll be back on Tuesday. — Soumya

Isabella Grullón Paz and Miles McKinley contributed to California Today. You can reach the team at CAtoday@nytimes.com.