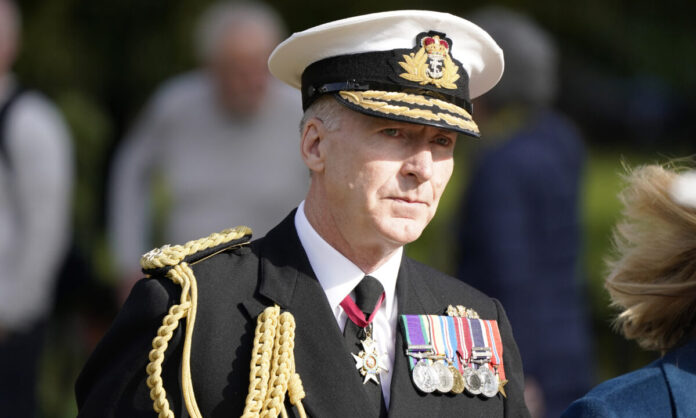 Russia has already “strategically lost” the war in Ukraine despite achieving “tactical successes” in recent weeks, the head of the UK’s armed forces has said.

Admiral Sir Tony Radakin, the UK’s chief of defence staff, called the war “a dreadful mistake by Russia,” in which he said it has lost 25 percent of its land power for only “tiny” gains.

Talking to the PA press agency on June 15 while on a visit to Scotland, Radakin said: “Russia has strategically lost already. NATO is stronger, Finland and Sweden are looking to join.”

He said the Russian war machine is “grinding away” and is running out of personnel and high-tech missiles.

“President Putin has used about 25 percent of his army’s power to gain a tiny amount of territory and 50,000 people either dead or injured,” he said.

Russia is now a “more diminished power” diplomatically and economically than several months ago, he said. “Any notion that this is a success for Russia is nonsense.”

“Russia is failing. It might be getting some tactical successes over the last few weeks, and those might continue for the next few weeks. But Russia is losing strategically,” he said.

The UK has become one of Ukraine’s most important allies in the country’s resistance against the Russian invasion, providing both advanced weaponry and humanitarian aid.

Britain was the first European country to send lethal aid to Ukraine and has sent military aid worth more than £750 million ($924 million), including thousands of anti-tank missiles, air defence systems, and armoured vehicles, according to the government.

On May 7, the UK government pledged £1.3 billion ($1.6 billion) worth of further military support to Ukraine.

The UK recently announced it would gift M270 multiple-launch rocket systems (MLRS) to Ukrainian forces to help them defend themselves from Russian long-range artillery.

Radakin said the UK would continue its support for Ukraine and “we’re in this for the long haul.”

But he said Ukraine’s real strength lies in “the mass that’s provided by the whole of the international community” as well as “the courage and the resolve of the Ukrainian armed forces to fight for their territory.”

On June 16, the leaders of Germany, France, and Italy—who had been criticized in the past by Ukrainian officials for not providing enough support—made a joint visit to Kyiv to show solidarity with Ukraine.