Inflation Heats Up in Eurozone, Hitting Record High in May 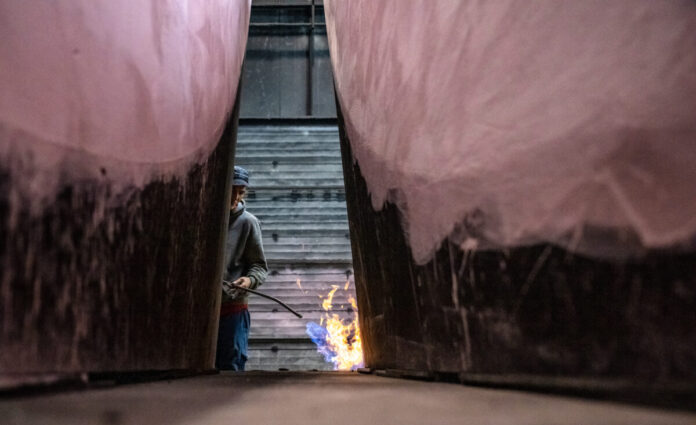 Inflation in the 19 countries that share the euro currency jumped to a record high in May, according to Eurostat, the E.U.’s statistical agency, with soaring energy prices driving the bulk of the uptick.

Eurostat said in a June 17 statement (pdf) that inflation in the euro area jumped to an annualized 8.1 percent last month, up from 7.4 percent in April and the fastest pace on record.

Inflation saw its biggest surge in Estonia (20.1 percent) and the lowest in France and Malta (5.8 percent each).

Barely a year ago, eurozone inflation stood at 2.0 percent, in line with the European Central Bank’s (ECB) inflation target, but a series of shocks have sent prices soaring.

The swell of easy money that flooded markets to bolster struggling European economies in the wake of pandemic shutdowns, along with various supply chain dislocations that drove up material and shipping costs, and now disruptions related to Russia–Ukraine conflict, have all factored into skyrocketing inflation.

A recent ECB survey of professional forecasters showed that future inflation expectations were revised up by 3.0 percentage points for 2022, up to 6.0 percent, mostly reflecting higher food and energy prices.

Energy prices soared even before Moscow’s invasion of Ukraine prompted embargoes on Russian oil and gas that put upward pressure on prices. In the fall of 2021, gas, coal, and electricity prices jumped to their highest levels in decades, driven higher by a post-lockdown surge in demand combined with a weaker-than-expected increase in supply.

In Germany, where annual inflation in May jumped to 8.7 percent, officials have warned of a looming gas shortage and higher prices.

Klaus Müller, the head of Germany’s Federal Network Agency, a regulatory office with a range of oversight mandates, including over electricity and natural gas markets, told the Rheinische Post that the energy crisis will “send shockwaves throughout the country” and drive a flurry of business insolvencies.

European natural gas prices have rallied sharply in recent weeks as Russian flows via the Nord Stream pipeline were reduced and the LNG market tightened following an outage at an export terminal in the United States.

In the United States, where consumer price inflation in May came in at a record 8.6 percent, energy prices have also climbed, sending gasoline prices to record highs.

Refining capacity fell in the United States in recent years, contributing to a supply squeeze. Also, shortly after taking office, President Joe Biden signed an executive order that froze construction of the Keystone XL pipeline, which would have brought oil from Canada to the interior United States, a move that was roundly criticized by the oil industry and Republicans.

The American Petroleum Institute (API), an industry group, recently called for a series of reforms that would “unlock American energy” by reducing regulatory burden and encouraging more investment in key infrastructure, among other proposals.

“America is blessed with abundant energy resources that are the envy of the world. Given today’s global unrest and economic uncertainty, American energy is a long-term strategic asset that can advance our national and economic security,” API President and CEO Mike Sommers said in a statement.

API called on the Biden administration to lift development restrictions on federal land and waters, streamline approvals for critical energy infrastructure projects, and bolster investment and access to capital by reducing other regulatory burdens.

“These 10 in ’22 policies are a framework for new energy leadership for our nation, unleashing investment in America and creating new energy access while avoiding harmful government policies and duplicative regulation,” Sommers said.