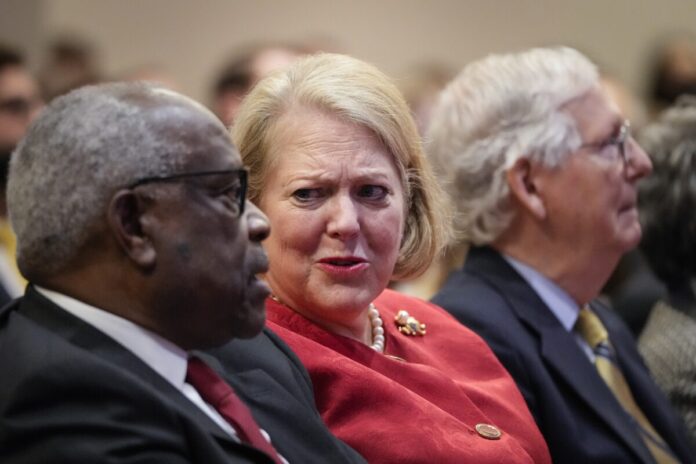 Ginni Thomas, the wife of Supreme Court Justice Clarence Thomas, will answer questions from the House of Representatives panel investigating the Jan. 6, 2021, breach of the U.S. Capitol.

“I can’t wait to clear up misconceptions. I look forward to talking to them,” Ginni Thomas told the Daily Caller on June 16.

She did not elaborate on what she sees as the misconceptions.

Rep. Bennie Thompson (D-Miss.), the chairman of the House panel, told reporters in Washington after a hearing that the panel sent Ginni Thomas a letter asking her to be interviewed by the committee.

“If she responded while the hearing was going on that she wants to come, we look forward to her coming,” he said.

The panel has reportedly obtained emails between Thomas and legal expert John Eastman prior to the Capitol breach that discuss Eastman’s theories on how then-Vice President Mike Pence could decline to accept electoral votes from some states due to lingering questions about the legitimacy of the voting results.

Greg Jacob, who was Pence’s lawyer at the time, dismissed Eastman’s proposals, which he said during Thursday’s hearing would have led to “an unprecedented constitutional” situation.

Thompson told Axios that in the emails, the panel has discovered “some information that refers to Ginni Thomas” but declined to give more details.

Eastman, a legal adviser for former President Donald Trump’s 2020 campaign, and who was previously a clerk for Justice Thomas, was interviewed by the panel in December 2021. He was not asked about Ginni Thomas at the time.

Jacob told the panel a few months later that Eastman told him that Justice Thomas and another justice might rule favorably if the authority of Pence, who was also president of the Senate, came into question, but after they went through a few of Thomas’s opinions together, “he acknowledged” that the Supreme Court would rule 9–0 against Eastman’s legal theories.

Jacob said Thursday that Eastman thought the courts might not get involved, though, invoking the political question doctrine, which would then lead to states resolving the electoral count issues themselves.

Eastman wrote in a blog post after the hearing that he never discussed with Ginni Thomas or Justice Thomas “any matters pending or likely to come before the Court.”

“We have never engaged in such discussions, would not engage in such discussions, and did not do so in December 2020 or anytime else,” he added. “As for the email communications I had with Mrs. Thomas? As you can see for yourselves, she invited me to give an update about election litigation to a group she met with periodically.”

Eastman released a copy of a message Ginni Thomas sent him on Dec. 4, 2020, asking whether he could present “a status update” to “a group of grassroots state leaders” called Frontliners with which she was assisting.