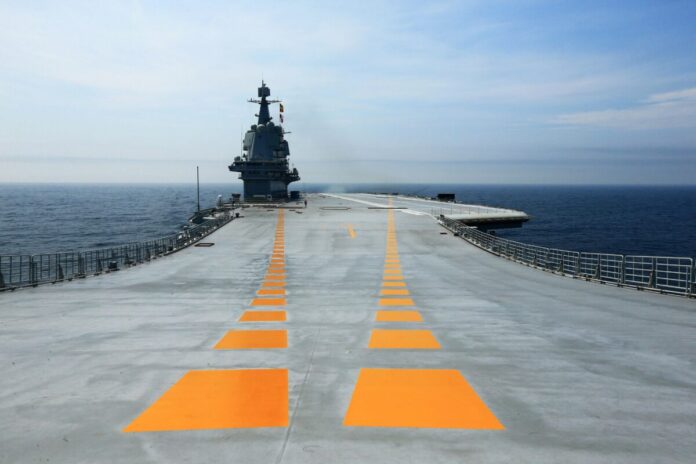 China launched its third aircraft carrier on June 17, marking the latest step in the communist regime’s march toward military modernization.

Previously known as the Type 003, Chinese communist authorities dubbed the vessel the “Fujian” during an elaborate ceremony rife with champagne, colored smoke, and ribbons. The name Fujian references the province immediately opposite Taiwan across the Taiwan Strait, and serves as a reminder of the Chinese Communist Party’s (CCP) ambition to unite the self-governed island with the mainland.

In development since 2015, the Fujian was initially expected to be launched earlier this month with the onset of the Dragonboat Festival, but was delayed for unknown reasons.

The vessel is China’s first wholly modern aircraft carrier. It was preceded by the “Liaoning,” a retrofitted Soviet ship, and the “Shandong,” a domestically-built vessel that was designed and augmented off the plans for the Liaoning.

Though the vessel will not be fully operational until 2024, it is far and away superior in size and technology to both which came before it.

Fujian outweighs both the Liaoning and Shandong by an estimated 20,000 tons, according to a report by the International Institute for Strategic Studies. And it much more closely resembles U.S. carrier designs than Soviet or Russian ones. Unlike United States’ carriers, however, it is not nuclear-powered but instead relies on conventional power.

Perhaps most importantly, the Fujian is equipped with electromagnetic launch catapults that will allow it to field more varieties of aircraft with heavier payloads and more fuel, and boasts a full-length flight deck.

The feat means that communist China will join the United States and France as just the third nation in the world to deploy an aircraft carrier with such catapult systems.

CCP General Secretary Xi Jinping has made massively expanding and modernizing China’s military a core part of his rule, and the regime’s growing fleet of aircraft carriers is a testament to that. The launch of the Fujian also comes at a time of international strife and a historic bottoming out of Sino-American relations.

“If anyone dares to split Taiwan from China, the Chinese army will definitely not hesitate to start a war no matter the cost,” Wei said.

The incident follows numerous warnings from top U.S. military officials that the CCP is not only preparing an invasion of Taiwan, but designing weapons systems with the explicit purpose of overcoming American forces and ejecting the United States from the Western Pacific.

To that end, the CCP’s navy now numbers more than 360 vessels, and could feasibly also organize the hundreds of additional ships that make up China’s maritime militia.

The U.S. Navy, meanwhile, has fewer than 300 vessels, with several slated to be decommissioned in the coming years.

Last year, Dakota Wood, a senior fellow at the Heritage Foundation, said that officials often believed the U.S. Navy to be superior to China’s because of the number of advanced warships it commands, such as its state-of-the-art carriers.

According to Wood, however, that was a mistake, as only a small fraction of the United States’ global fleet would be capable of responding to crises in the Indo-Pacific.

“Oftentimes you’ll hear comparisons that the U.S. Navy has as many carriers as the next [so-many] countries combined, but only a percentage of that naval capability is available on any one day, and you have to take that and project that abroad,” Wood said.

Only about 60 U.S. warships, including one aircraft carrier, are ever deployed in the Indo-Pacific region at any given time.