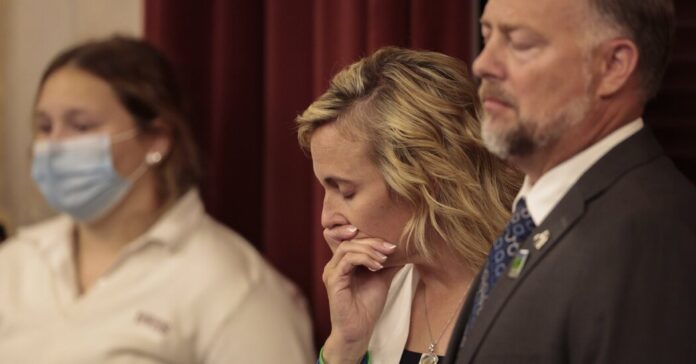 Five men convicted on charges relating to the March 2021 hazing death of a 20-year-old Bowling Green State University student were sentenced in Ohio on Thursday, with three of them receiving jail sentences of up to 28 days.

The men, who are between the ages of 20 and 22, were among eight who were indicted in connection with the death of Stone Foltz, a sophomore who died three days after attending an off-campus Pi Kappa Alpha fraternity initiation. Prosecutors said he drank a liter of whiskey at the event.

Paul A. Dobson, the Wood County prosecuting attorney, said that he was glad the court agreed “that some of the men involved in this case needed to see the inside of a jail cell.” To finally start seeing the case come to a close, he added, was gratifying.

But Mr. Foltz’s parents, Cory and Shari Foltz, said in a statement released Thursday that while the sentencing of the five men may be a conclusion for some, there would be no closure for their family until hazing was “permanently eradicated” on college campuses.

“Universities and Greek organizations must be held accountable,” they said, adding that it was not just their own son, but many other students who had been “tragically injured or killed because people in power refuse to protect them.”

On March 4, 2021, Mr. Foltz, a business major from Delaware, Ohio, attended what prosecutors described as a mandatory fraternity event, where the new members, so-called “littles” or “little brothers” — most of them underage — were each given a bottle of about one liter of liquor, which they were expected to drink. According to prosecutors, Stone Foltz “consumed a liter bottle of Evan Williams 86 proof bourbon.”

Later that evening, he was taken to his apartment and left unconscious by a fraternity member, Jacob Krinn, and several others, prosecutors said. When paramedics arrived at Mr. Foltz’s apartment, his roommate was performing CPR, but Mr. Foltz was no longer breathing, they said. He was taken to Wood County Hospital and later transferred to Toledo Hospital, where he died on March 7.

The Lucas County coroner ruled his death as “fatal ethanol intoxication during hazing incident.” Prosecutors said that during the police investigation, several of the fraternity members lied to investigators and destroyed both physical and electronic evidence.

The five men were also sentenced to 28 days of electronic home monitoring and 100 hours of community service.

In a statement released on Thursday, prosecutors said that the court could have ordered jail time for all of the defendants, excluding Mr. Lehane, but had “held that in reserve” pending successful completion of their probation. The court “suspended jail time over Mr. Lehane,” prosecutors added, pending his compliance with the terms of his probation.

They said that the defendants had cooperated with the prosecution of two of the other men convicted, Mr. Krinn and Troy Henricksen, including testifying against them.

Mr. Krinn, 21 and Mr. Henricksen, 24, were found guilty on counts of hazing and failure to comply with underage alcohol laws. Mr. Krinn was also found guilty of obstructing official business.

The two men, as well as Canyon Caldwell, 22, who also pleaded guilty and testified at the trial, will be sentenced in the next several weeks.

“The sad thing is there’s no winners in this situation,” said Rex Elliott, a lawyer representing Mr. Foltz’s parents in a separate civil complaint against Bowling Green State University. “The Foltz family has lost their son, and these kids that were sentenced today — it’s going to be on their records forever.”

Mr. Elliott said he planned to file the complaint next week. The Pi Kappa Alpha hazing ritual, Mr. Elliott added, had been going on for several years.

“It’s not a secret what it involves and they did nothing to put a stop to it,” Mr. Elliott said of the university.