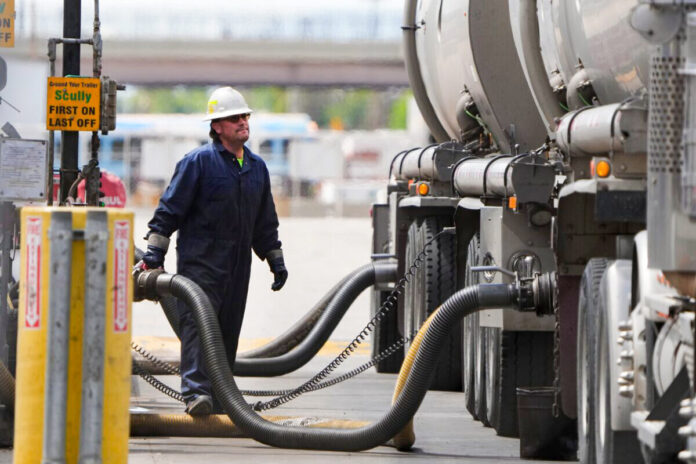 American fossil fuel companies responded on Wednesday to President Joe Biden’s June 14 letter that accused them of profiteering and driving up gas prices during a “time of war.”

Biden’s letter blamed gas prices, which have skyrocketed from $2.53 per gallon when he took office to $5.00 today, on “Putin’s war of aggression” and greedy corporations, ignoring his own efforts to suppress American fossil fuel production. Since taking power in January 2021, the Biden administration has worked relentlessly across multiple agencies to carry out his campaign pledge in which he stated, “I guarantee you we are going to end fossil fuel.”

Biden’s note to energy executives put the blame for today’s surging gas prices on refineries and the “high profit margins for refining oil into gasoline,” stating that when crude oil was $120 per barrel in March, similar to today’s prices, “the price of gas at the pump was $4.25 per gallon. Today, gas prices are 75 cents higher.” The difference, he claimed, was due to refiners’ profit margins, which have tripled since then. Simultaneously, White House Spokesperson Karine Jean-Pierre slammed U.S. oil companies for failing to do their “patriotic duty.”

Responding to Biden’s letter, the American Petroleum Institute and the American Fuel & Petrochemical Manufacturers stated (pdf) that U.S. refineries are currently operating at 94 percent capacity, among the highest utilization rates in the world, and that prices for oil products are set on world markets based on global supply and demand, not by American companies. According to the Energy Information Administration, refining costs made up 14 percent of the total price of gasoline in 2021. The remainder includes 54 percent for crude oil, 16 percent for distribution, and 16 percent for taxes. Escalating prices have driven up the share of crude oil to 60 percent of the total this month.

Regarding Biden’s complaint that U.S. refineries had pushed gas prices higher by reducing their capacity by 800,000 barrels a day, industry representatives responded that half of the refineries that have shut did so because they are being converted to renewable fuel production. “These investments cannot be easily or quickly undone,” they stated.

The fossil fuel industry, its consumers, and its investors have responded to administration policies designed to reduce production and capacity. This includes federal incentives to replace gasoline-powered cars and trucks with electric vehicles (EVs), cancellation of oil leases in Alaska, canceling new lease sales in the Gulf of Mexico, and canceling the $9 billion Keystone Pipeline, for which construction was already underway.

On March 11, the Environmental Protection Agency (EPA) reinstated California’s authority to enforce its own emissions standards for cars and trucks, “which other states can also adopt and enforce,” according to an official statement. “With this authority restored, the EPA will continue partnering with states to advance the next generation of clean vehicle technologies.”

Kathleen Sgama, President of the Western Energy Alliance, stated in a June 16 Fox News interview that “we keep hearing that he’s working like the devil to bring down energy prices and that is anything but the truth.” She noted that there are about 5,900 development leases and 3,000 permits that are currently being held up by environmental litigation.

The Department of Justice (DOJ) recently announced the creation of its Office of Environmental Justice, which “will engage all Justice Department bureaus, components and offices in the collective pursuit of environmental justice.” In addition, the Securities and Exchange Commission (SEC) issued a ruling on March 21 that all listed companies must issue audited reports on their greenhouse gas emissions including that of their suppliers.

The SEC action underscored the administration’s alignment with progressive investment managers, pension funds, banks, insurers, and finance ministers who joined together in global clubs like Climate Action 100+, the Global Investors Statement to Governments on Climate Change, the Net Zero Asset Managers Initiative, and the Glasgow Financial Alliance for Net Zero. Members of these clubs have signed joint pledges to reduce or eliminate financing for the fossil fuel industry.

The sum effect of these policies has been a chilling effect on fossil fuel investment. The last major refinery built in America was in 1977, long before the current administration, but Chevron CEO Mike Wirth stated that he does not expect any new refineries will be built in the United States for economic and political reasons.

Many in the fossil fuel industry see current gas prices as the result of a deliberate and continuing effort by the Biden administration to force Americans to switch from oil and gas to renewable energy.

Biden recently praised oil price hikes as “an incredible transition that is taking place that, God willing, when it’s over, we’ll be stronger and the world will be stronger and less reliant on fossil fuels.” And Energy Secretary Jennifer Granholm stated that rising oil prices were “an exclamation point” demonstrating the need to switch from oil to wind and solar, previously advising Americans that “if you drive an electric car, this would not be affecting you.”

“They want this current situation,” Daniel Turner, Executive Director of Power the Future, an energy advocacy group, told The Epoch Times. “They want the status quo, they just don’t want the political fallout from it. The Biden administration needs to understand that if they’re going to pursue this agenda, then there are going to be consequences. It’s almost childlike naivete to think that you can have such a radical agenda and not have any consequences. It just shows how unserious and in-over-their-heads this administration is.”

But the progressive push to curtail fossil fuels is taking effect before renewables such as wind and solar are capable of filling the gap. Price hikes and shortages of gasoline, diesel, and fertilizer—an oil derivative—have had a ripple effect throughout the economy, hitting not only prices at the pump but also food prices, shipping and delivery expenses, and the cost of products that use plastic or other oil-based components.

To the many things that Democrats have blamed on Russia, including buying Facebook ads to support President Trump’s campaign and spreading misinformation, Biden has now added America’s inflationary crisis. “There is no question that Vladimir Putin is principally responsible for the intense financial pain the American people and their families are bearing,” he wrote.

He encouraged refineries to stand up to Putin and “take immediate actions to increase the supply of gasoline, oil, and diesel.” Biden said he has done his part by releasing supplies from the Strategic Petroleum Reserve, allowing greater use of ethanol in gasoline, and using the Defense Production Act to provide inputs for energy production.

The fossil fuel industry responded to Biden that better solutions would include “promoting infrastructure development, addressing escalating regulatory compliance costs, allowing all technologies to compete to reduce emissions, modernizing fuels policies, and ensuring capital markets are functioning for all participants.”

Meanwhile, Biden has planned a trip to Saudi Arabia in July to implore oil producers there to boost their output. And the Biden administration has been working on a deal with Iran to end sanctions, allowing them to sell more oil as well.

“I wish the Biden administration made the same overtures and had the same spirit of collaboration with [American oil companies] that they have with the Kingdom of Saudi Arabia, the Maduro government in Venezuela, and the Ayatollah in Iran,” Turner said. “The American oil and gas industry just gets threats and questioning of our patriotism.”

Kevin Stocklin is a writer, film producer, and former investment banker. He wrote and produced “We All Fall Down: The American Mortgage Crisis,” a 2008 documentary on the collapse of the U.S. mortgage finance system.