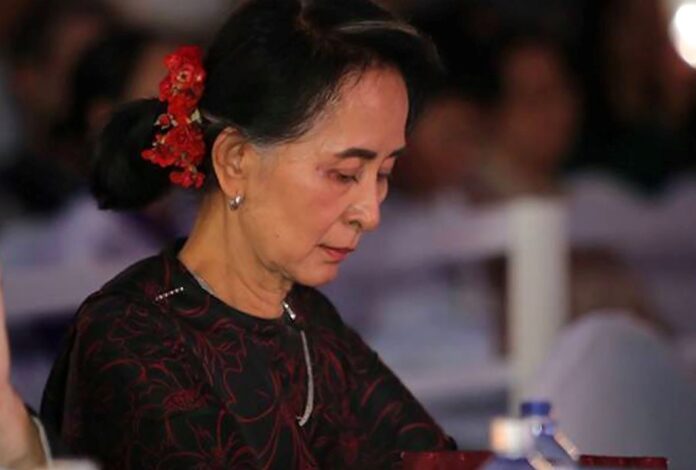 The National League for Democracy leader and State Counsellor has been detained since the Feb.1, 2021 coup. Suu Kyi has been sentenced to 11 years in jail on 19 counts and faces further charges that could keep her in prison for as long as 100 years.

When asked about possible meetings with Suu Kyi, and former Myanmar president Win Myint, the spokesman said the ASEAN Special Envoy was only scheduled to meet with ethnic armed groups currently holding peace talks with the junta.

“At this time, meeting with the appropriate and deserving people will be on schedule,” he said.

“The people who deserve to be met do not include those who are being prosecuted and are on trial.”

Sokhonn, who is also Cambodia’s Foreign Minister and Deputy Prime Minister, is scheduled to make his second visit to Myanmar as ASEAN Special Envoy on June 29 and 30.

The focus of his visit will be the urgent need for humanitarian assistance in Myanmar but ASEAN leaders, including Cambodia’s Prime Minister, have called for meetings with Suu Kyi and officials from the shadow National Unity Government (NUG), considering talks with them to be key to resolving the conflict.

The military council scheduled meetings between Sokhonn and some members of the National League for Democracy (NLD) during the Special Envoy’s first visit in March this year but cancelled meetings with some NLD members due to political opposition from NLD MPs who have left the country.

Political analyst Ye Tun said the trip could not be considered a success if the ASEAN Special Envoy was not allowed to meet with Suu Kyi at a time when the situation in Myanmar is deteriorating.

“He would be even more disappointed if he was not allowed to meet with Aung San Suu Kyi and if the military does not comply the Cambodian Prime Minister’s request not to impose the death penalty on former NLD MP Phyoe Zeya Thaw, and others,” he said.

“Cambodia stands by the pressure being applied by ASEAN. If it comes to nothing during the trip the feeling will be that the Special Envoy cannot do anything effectively in his visit.”

Cambodia is the current chair of ASEAN and, in a call with Snr. Gen. Min Aung Hlaing on May 1, Prime Minister Hun Sen urged Myanmar’s junta chief to allow the special envoy to meet with Suu Kyi. He also asked the military leader to take further steps to implement the five-point consensus for Myanmar, reached with ASEAN’s foreign ministers in April 2021.

Failure to achieve all the points in the consensus in more than a year has led to growing criticism at home and abroad and Sokhonn will use his second visit to focus on the sticking points in the agreement.

Malaysia’s Foreign Minister Saifuddin Abdullah has spoken up in global summits, calling for specific talks between the Special Envoy, Suu Kyi and NUG leaders, arguing that the five-point consensus includes an agreement to hold a dialogue with all stakeholders in Myanmar.

Aung San Suu Kyi will spend her 77th birthday on June 19 in detention. During her 34-year political career she has been repeatedly arrested and prosecuted by successive military governments, spending 17 of her birthdays in detention.

Pro-democracy activists are expected to mark the Nobel Laureate’s birthday on Sunday with nationwide protests, according to Crisis24.

“The largest protests will probably occur outside government buildings and in other popular protest sites, such as public squares, in major cities like Yangon and Mandalay. Hundreds to thousands of people will probably participate in larger demonstrations,” the global security consultancy said in an alert on Thursday. Authorities are likely to step up security, causing disruption to transport and businesses, it said.

Crisis24 also warned of the likelihood of clashes between protestors and security forces and the risk of explosions targeting security personnel and facilities, both in the countryside and in cities including Yangon, Mandalay, and Naypyidaw.