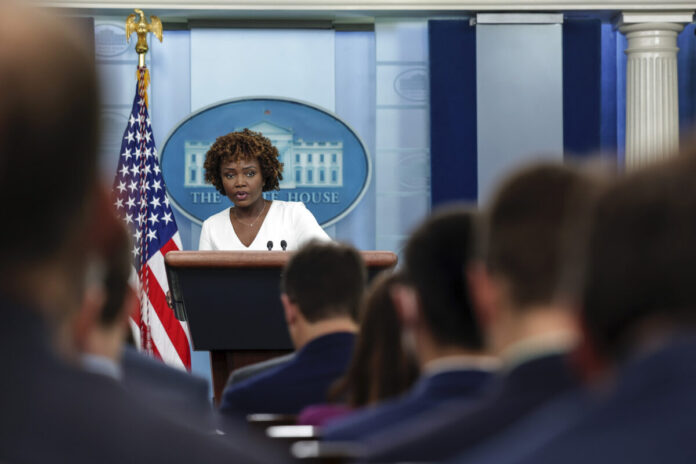 Jean-Pierre was asked about why the Biden administration is pressuring oil companies to increase productivity at refineries rather than carrying out new drilling projects. Right after he took office in January 2021, President Joe Biden signed a flurry of executive orders including suspending new drilling leases on federal lands, ending the Keystone XL pipeline project, and killing federal fossil fuel subsidies.

Oil companies, she told reporters, have cut refinery capacity during the initial months of the COVID-19 pandemic and haven’t restored to those levels. Democrats and Biden say that the COVID-19-related slowdown and the Russia-Ukraine war is causing the spike in prices.

When asked specifically by a Fox News reporter about why the federal government won’t expand drilling in the United States, she said that “we don’t need to do that.”

“What we need [oil companies] to do is, with the oil that’s out there, we need them to refine that oil so that the capacity can go up and that prices would go down,” she argued.

Earlier this week, Biden wrote a letter to oil companies and threatened to use executive action if they don’t increase capacity at their refineries. For several weeks, as regular gas prices have hit $5 per gallon on average, Biden has increasingly blamed energy companies for the hike.

“Your companies and others have an opportunity to take immediate actions to increase the supply of gasoline, diesel, and other refined product you are producing,” he alleged. “My administration is prepared to use all reasonable and appropriate Federal Government tools and emergency authorities to increase refinery capacity and output in the near term, and to ensure that every region of this country is appropriately supplied.”

In response, ExxonMobil released a statement suggesting the federal government’s policies are, in part, to blame.

“In the short term, the U.S. government could enact measures often used in emergencies following hurricanes or other supply disruptions—such as waivers of Jones Act provisions and some fuel specifications to increase supplies,” the oil giant said Wednesday.

Over the longer term, U.S. policymakers “can promote investment through clear and consistent policy that supports U.S. resource development, such as regular and predictable lease sales, as well as streamlined regulatory approval and support for infrastructure such as pipelines,” the firm continued.

The comments from Jean-Pierre echo ones made by White House climate czar John Kerry, the former Massachusetts senator, during a forum last week. Kerry alleged that people who argued that the U.S. needs “more drilling” to offset the high gas prices are pushing a “false narrative.”

As for new drilling, Kerry responded: “No, we don’t. We absolutely don’t.”