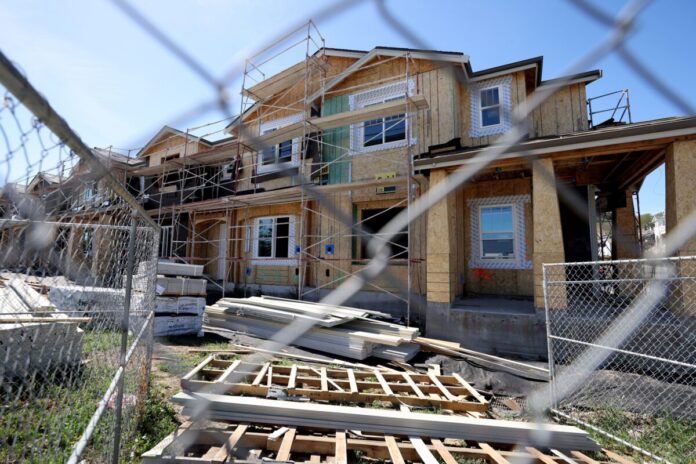 American homebuilders have grown more pessimistic about the state of the housing market over the past six months due to increasing interest rates, with sentiment falling to their lowest level since June 2020 at the height of the pandemic.

Mortgage demand throughout the country has fallen to less than half of what it was a year ago, as rising inflation and higher mortgage rates have slowed the traffic of prospective home buyers and put a damper on builder sentiment.

The National Association of Home Builders (NAHB)/Wells Fargo Housing Market Index (HMI), released on June 15, fell 2 points to 67 in June, but still in the plus 50 range.

“In a troubling sign for the housing market and broader #economy, home builder confidence posted its sixth straight monthly decline in June, falling two points to 67, in the NAHB/Wells Fargo Housing Market Index, the lowest HMI reading since June 2020,” NAHB said on Twitter on June 15.

The index hit a record high of 90 at the end of 2020, when the pandemic sparked strong demand for homes in the suburbs as more people worked from home.

According to the mid-June index report, buyer traffic fell 5 points to 48, the first time it has fallen below the break even level of 50 since the end of spring 2020.

Current HMI sales conditions fell 1 point to 77, while the gauge measuring sales expectations in the next six months fell 2 points to 61.

“The entry-level market has been particularly affected by declines for housing affordability and builders are adopting a more cautious stance as demand softens with higher mortgage rates.”

“Government officials need to enact policies that will support the supply-side of the housing market as costs continue to climb.”

The Federal Reserve on June 16 again raised interest rates by 0.75 percentage points, which does not look good for business in the industry.

The average rate on the 30-year fixed mortgage has risen sharply since the start 2022, rising to 6.28 percent on June 14, from 3.25 percent in January, according to Mortgage News Daily.

“Residential construction material costs are up 19% percent year-over-year with cost increases for a variety of building inputs, except for lumber, which has experienced recent declines due to a housing slowdown,” said Robert Dietz, NAHB’s chief economist.

He said that the housing market also is dealing with challenges on “the demand-side of the market; the increase for mortgage rates for the first half of 2022 has priced out a significant number of prospective home buyers, as reflected by the decline for the traffic measure of the HMI.”

Total mortgage application volume was 52.7 percent lower last week than the same week one year ago, according to the Mortgage Bankers Association’s seasonally adjusted index on June 15.

“Mortgage rates followed Treasury yields up in response to higher-than-expected inflation and anticipation that the Federal Reserve will need to raise rates at a faster pace,” said Joel Kan, MBA’s Associate Vice President of Economic and Industry Forecasting.

The three-month moving averages for regional HMI scores show the Northeast falling one point to 71, the Midwest dropping six points to 56, the South falling two points to 78, and the West posting a nine-point decline to 74.