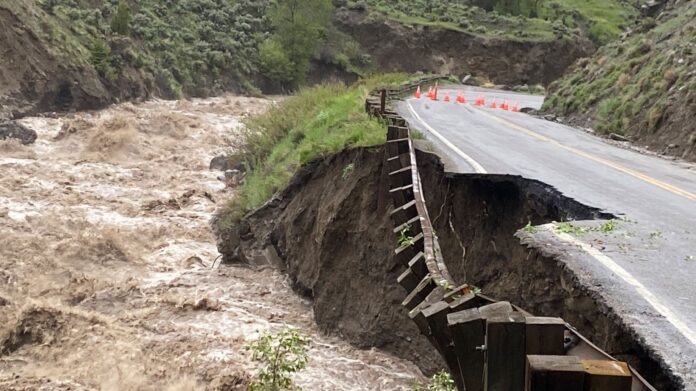 Yellowstone National Park, which spreads across Wyoming, Montana and Idaho, will remain closed for a substantial period of time after Monday’s record-breaking floodwaters ripped through the historic park.

Heavy rains, along with melting snow from the mountains, caused a rush of water through the area, forcing officials to close all entrances to the park amid its busiest season for tourists.

Multiple roads, including the North Entrance in Gardiner, Montana; Mammoth Hot Springs; Lamar Valley; and Cooke City, Montana, sustained extensive damage, according to a press release from the park.

Despite the devastation, the heavy rain and flooding did not injure any residents or tourists.

Here are some of the aftermath photos from the Yellowstone National Park floods.

High water flowing from the Gardiner River along the park’s north entrance washes away a portion of the road.

Debris from floodwaters is piled up in front of an abandoned home in Red Lodge, Montana.

Alisha Beekman looks at soggy drywall in her daughter’s bedroom in the aftermath of the flood.

A house partially collapses into Rock Creek after floodwaters wash away a road and a bridge in Red Lodge, Montana.

Highway workers build up the shoreline by a washed-out bridge along the Yellowstone River.

A house falls into Rock Creek after floodwaters wash away a road and a bridge in Red Lodge, Montana.

An aerial view Tuesday shows the extent of flooding in Livingston, Montana.

A home is surrounded by floodwaters Wednesday in Livingston, Montana.