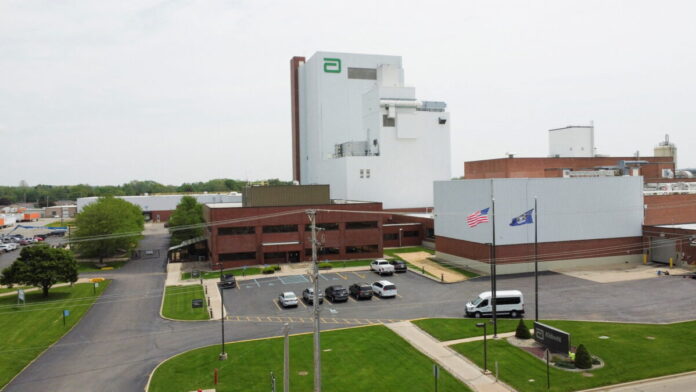 Production at a major baby formula plant in the United States is being delayed after storms hit Michigan this week.

Abbott said on June 15 that it was halting production of a specialty formula at its plant in Sturgis so it could assess damage caused by the storm and clean and re-sanitize the plant.

Afterward, the plant will need to be inspected by U.S. regulators and an independent third party, per a consent agreement reached by Abbott and the Food and Drug Administration (FDA).

“This will likely delay production and distribution of new product for a few weeks,” Abbott said.

The Sturgis plant was shut down in February after environmental samples showed the presence of a bacteria that had sickened multiple infants who consumed formula.

The shutdown led to nationwide formula shortages—a problem that has still not been fully resolved.

According to Datasembly, the out-of-stock rate for formula was at 43 percent for the week ending May 8. The company has not released an update since May.

Abbott announced earlier in June it was resuming production at the Sturgis plant, and that it was focusing on producing specialty formulas like EleCare, which is designed for infants who cannot consume intact or hydrolyzed protein.

Once the plant is back up and running, EleCare production will resume first, followed by other specialty and metabolic formulas, Abbott said Wednesday.

Dr. Robert Califf, testifying to members of Congress in Washington, said what happened “is an unfortunate setback and a reminder that natural weather events can cause unforeseen disruptions in supply chains.”

Califf, the FDA’s commissioner, said he’s been in touch with Abbott executives and that FDA employees will be communicating with Abbott on a daily basis.

Abbott has ramped up production at its other plants, including some outside the United States, and other major manufacturers have also increased production, which means “there will be adequate supply” in the near future, according to Califf. Other efforts include relaxing import restrictions.

“We had hoped to have had a super supply so we could get the shelves completely restocked,” Califf said. “The estimate is perhaps two weeks. It is too early to give an exact estimate of what the delay will be in the Sturgis plant.”

Califf told lawmakers in early June it could take about two months for the supply of formula to reach typical levels.

Sen. Patty Murray (D-Wash.), chair of the Senate Health Committee, said that lawmakers are “extremely focused on” the formula crisis and that she hoped the flooding at Abbott’s plant doesn’t worsen the crisis.