Jan. 6 Defendant Gets Partial Acquittal From Judge, Still Faces up to 20 Years in Prison on Felony Charge 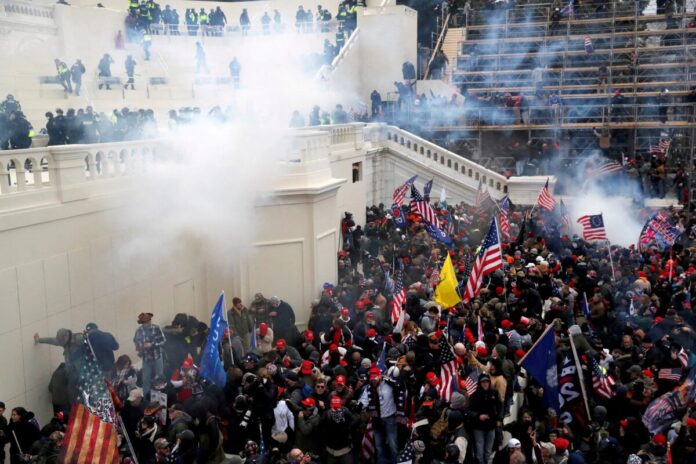 A federal judge on June 15 partially acquitted a man who was photographed holding a Confederate battle flag inside the Capitol building during the breach on Jan. 6, 2021.

They face up to 20 years in prison on the felony charges, while the four misdemeanor offenses carry a combined statutory maximum of three years behind bars, as well as possible financial penalties.

However, U.S. District Judge Trevor McFadden acquitted Hunter Seefried of three other related charges: the destruction of government property, entering and remaining in a restricted building or grounds with physical violence against property, and acts of physical violence in the Capitol grounds or building.

The father and son were both arrested on Jan. 14, 2021, in Delaware and both pleaded not guilty to all charges.

They are set to be sentenced in September.

“Their actions and the actions of others disrupted a joint session of the U.S. Congress convened to ascertain and count the electoral votes related to the presidential election,” the Justice Department said in a statement.

According to the Justice Department, the Seefrieds had attended a rally near the Ellipse in Washington on Jan. 6 before heading to the Capitol and illegally entering the grounds and joining other protestors who were walking up the steps of the building.

“People near Hunter and Kevin Seefried broke windows with a police shield and a wooden two-by-four, and Hunter Seefried removed a large piece of glass from one of those windows to clear the way,” the DOJ said.

The father and son were among the first people to enter the Capitol, and Kevin Seefried had been photographed inside the Capitol holding a Confederate flag, prosecutors said.

While inside the building, the Seefrieds were part of a larger group that verbally confronted several Capitol Police officers and chased Capitol Police Officer Eugene Goodman, the department said.

Both defendants were identified after the FBI received a report from Hunter Seefried’s co-worker, who claimed that the son had “bragged about being at the Capitol with his father on Jan. 6,” according to a criminal complaint.

The father and son both voluntarily participated in separate interviews with the FBI on Jan. 12, during which Kevin Seefried told agents that he had brought the Confederate battle flag to the Capitol from his home in Delaware where it is usually displayed outside.

Kevin Seefried also told agents that his son was asked by an unknown individual to assist with clearing a window that had broken during the breach which then allowed people from the crowd outside, including the Seefrieds, to gain access to the inside of the building.

The DOJ said more than 840 individuals have been arrested in the 17 months since the Jan. 6 breach for crimes relating to the incident. Of those arrested, more than 250 have been charged with assaulting or impeding law enforcement, and investigations are still continuing.

The Jan. 6 committee is also currently conducting televised public hearings of its investigation into the events of that day, although the scheduled hearing on June 15 was postponed to give lawmakers more time to prepare.