EU Leaders Visit Ukraine in Show of Support After Criticism 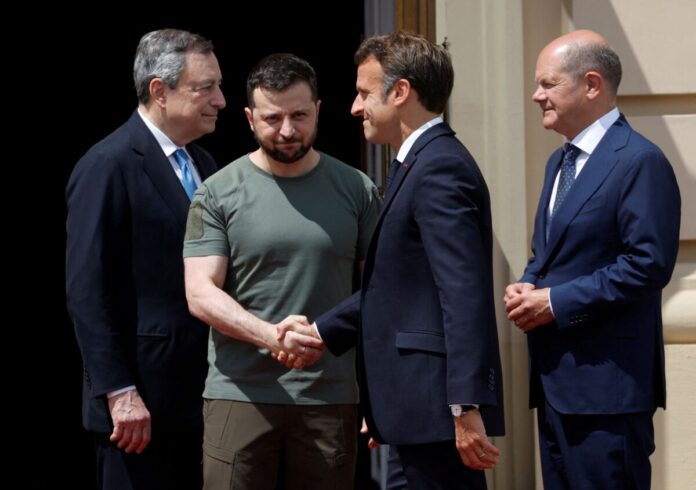 KYIV—The leaders of Germany, France, and Italy—all criticized in the past by Kyiv for support viewed as too cautious—made a joint visit on Thursday to show solidarity with Ukraine.

“It’s an important moment. It’s a message of unity we’re sending to the Ukrainians,” French President Emmanuel Macron said after pulling into Kyiv on an overnight train along with Germany’s Olaf Scholz and Italy’s Mario Draghi. They were also joined by Romanian President Klaus Iohannis.

On the battlefield, Ukrainian officials claimed their troops were still holding out against massive Russian bombardment in the eastern city of Sievierodonetsk, and described new progress in a counteroffensive in the south.

But they claimed battles on both main fronts depended on receiving more aid from the West, especially artillery to counter Russia’s big advantage in firepower.

Air raid sirens blared in Kyiv as the visit by the European leaders got under way. They toured Irpin, a town northeast of the capital devastated early in the war.

The visit had taken weeks to organize, while the three most powerful EU leaders all fended off criticism over positions described as too deferential to Russian President Vladimir Putin.

Still, the move by the three to travel together held strong symbolism at a pivotal moment—a day before the EU’s executive commission is expected to recommend pushing forward with Ukraine’s bid to join the bloc, which EU leaders are expected to endorse at a summit next week.

Scholz, Macron, and Draghi all say they are strong supporters of Ukraine who have taken major practical steps to reduce Europe’s dependence on Russian energy and find weapons to help Kyiv.

But Ukraine has long criticized Scholz over what it regards as Germany’s slow delivery of weapons and reluctance to sever economic ties with Moscow, and was furious this month at Macron for saying in an interview that Russia must not be “humiliated.”

Italy has also proposed a peace plan, which Ukrainians fear could lead to pressure on them to give up territory.

The main battle in recent weeks has been over the eastern city of Sievierodonetsk, where Ukrainian forces are now holed up in a chemical factory with hundreds of civilians. They ignored a Russian order to surrender on Wednesday.

“There were battles during the night. Our guys are holding the line of defense. Every day it becomes more and more difficult because the Russians are pulling more and more weapons into the city, and trying to storm it from several directions,” Sievierodonetsk mayor Oleksandr Stryuk said on Thursday.

All remaining bridges linking the city with Ukrainian-held territory on the opposite bank of Siverskyi Donets river were destroyed in recent days, but Ukrainian officials say the garrison is still not completely cut-off.

In the south, Ukraine says its forces have been making inroads into Kherson Province. There has been little independent reporting to confirm battlefield positions in the area.

ZelenskYy’s chief of staff, Andriy Yermak, said on Twitter that he had visited an area just 3–4 km from Russian positions, where dozens of “ghost villages” were depopulated by the combat.

The war has caused global economic disruption and surging prices for food and energy. Despite sanctions, Europe still depends on Russia for natural gas.

Deliveries through the Nord Stream 1 pipeline to Germany have declined in recent days, raising concern about storing supplies for winter, with Moscow blaming sanctions that have held up delivery of equipment sent abroad for repair.

Share
Facebook
Twitter
Pinterest
WhatsApp
Previous articleJan. 6 Defendant Gets Partial Acquittal From Judge, Still Faces up to 20 Years in Prison on Felony Charge
Next articleHe Was Acquitted of a 1990 Murder. But New DNA Test Shows He Was Guilty, Officials Say.