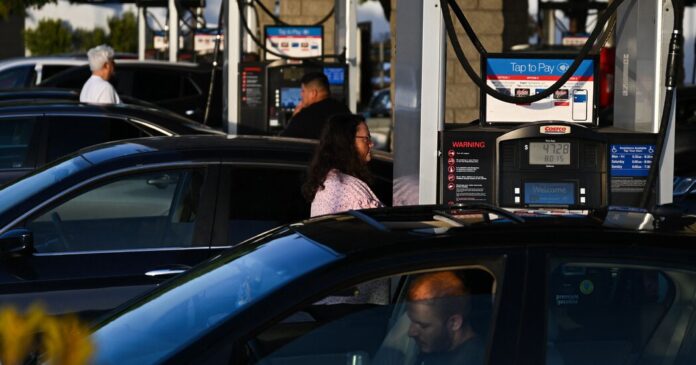 Jerome Powell, the chairman of the Federal Reserve, made the understatement of the year on Wednesday when he noted offhandedly to reporters, “Clearly, people do not like inflation.”

According to Fox News’s latest national poll, 41 percent of registered voters said that “inflation and higher prices” represented the most important issue influencing their ballot decision in November. Just 12 percent of voters called guns their top priority, the second-place issue. Seventy-one percent disapproved of the job President Biden is doing on inflation.

This is not exactly a vote of confidence in the federal government. In the past, this level of public dissatisfaction has typically led to major political upheaval.

Nor do they seem to be giving the administration much credit for an unemployment rate that is down to 3.6 percent, just a tick above its prepandemic level.

The Fed might be Biden’s best hope. After the Federal Open Market Committee announced on Wednesday that it would raise short-term interest rates by three-quarters of a percentage point, Powell said the Fed’s goal was to bring inflation closer to its 2 percent target while keeping the labor market “strong.”

He hastened to add: “We’re not trying to induce a recession now. Let’s be clear about that.”

Yet some commentators, notably David Frum of The Atlantic, have begun to fret that in trying to tame inflation, the Fed will do exactly that — start a recession, just in time to doom Biden or whomever Democrats nominate in his stead in 2024.

Frum noted the historically tight link between economic growth and a president’s chances of re-election. Citing the possibility that an unrepentant Donald Trump will run again, he argued that a downturn this year or next could result in “a democracy-wrecking election the next year.”

He concluded: “So the Federal Reserve has a more than usual obligation this week to measure its policy appropriately. A miscalculation in monetary policy in 2022 could reverberate through long ages of American history ahead.”

The Fed’s relationship with politics

Let’s set aside the fraught question of whether Trump’s re-election could bring about the end of American democracy. Does the Fed, in fact, have an “obligation” to consider how its actions might affect the U.S. political system?

On a simple reading of the law, not really. The Federal Reserve Act gives the Fed the authority to regulate the nation’s money supply, to foster the “long-run potential” of the U.S. economy and to promote the goals of “maximum employment, stable prices and moderate long-term interest rates.”

Frederic Mishkin, a former member of the Fed’s board of governors, no doubt spoke for many in the finance world when he wrote in an email, “I most strongly disagree with the view that the Federal Reserve should adjust its policy to favor or harm any politician.”

He added, “The Fed should be as apolitical as possible, and its policy focus should be on stabilizing both inflation and output fluctuations, as is mandated by congressional legislation.”

But it’s hard to divorce the Fed from its historical roots, founded as it was in an era of great political turmoil driven by frequent financial panics.

The Fed was successfully established in 1913 because President Woodrow Wilson won the assent of William Jennings Bryan, the most influential populist leader of the time, by guaranteeing that government officials appointed by the president, not private sector bankers, would run the board.

At Bryan’s insistence, the Fed was also decentralized into 12 regional “reserve banks” to dilute the influence of New York financiers and promote lending to farmers across the country.

“It’s certainly embedded in the original idea of the Federal Reserve that it be broadly responsive to the needs of the citizenry,” said Eric Rauchway, a professor of history at the University of California, Davis and the author of “Why the New Deal Matters.”

The Fed came of age between the two world wars — a period dominated by the determination of political and economic leaders on both sides of the Atlantic Ocean to halt the rise of communism on the left and fascism on the right. And though the central bank bears a great deal of responsibility for the stock market crash of 1929 and the ensuing Great Depression, monetary policy was an inextricable part of that effort.

What would Keynes do?

One of the intellectual giants of the interwar era was John Maynard Keynes, who was driven by his quest to prevent another global conflict and hobble authoritarian figures like Benito Mussolini in Italy and, closer to home, the British fascist leader Sir Oswald Mosley.

Keynes first became known for “The Economic Consequences of the Peace,” his 1919 book warning that the harsh terms of that year’s Treaty of Versailles would sow the seeds of dictatorship and future wars.

In 1922, writing from a disastrous postwar reconstruction conference in Genoa, Italy, Keynes predicted that if Europe’s growing militarism were left unchecked, “sooner or later an economic disease spreads which ends in some variant of the delirium tremens of revolution.”

That was six months, Carter noted, before Mussolini’s Black Shirts marched on Rome.

In the 1930s, the primary economic problems were unemployment and deflation — and the architects of the New Deal, Keynes among them as a close confidant of President Franklin Delano Roosevelt, sought to alleviate both by stimulating inflation. Roosevelt secured, through an amendment to the Agricultural Adjustment Act of 1933, a degree of presidential authority over monetary policy that would be unimaginable today.

One of Roosevelt’s advisers, Rauchway said, told the president he faced a stark choice: “A rise in prices or a rise in dictators.”