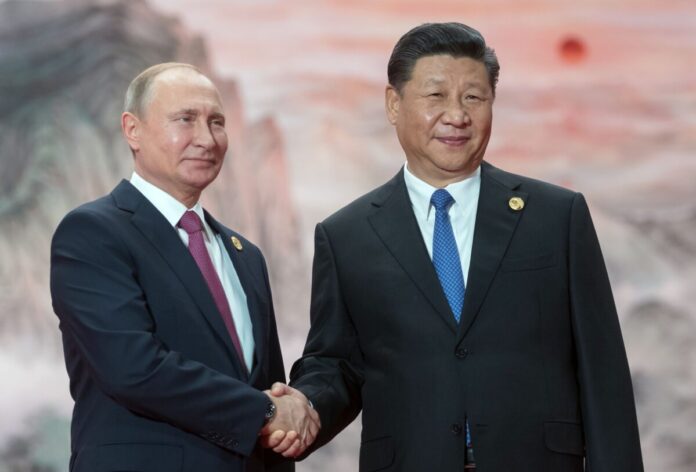 “China is willing to work with Russia to continue supporting each other on their respective core interests concerning sovereignty and security,” Xi said, “as well as on their major concerns, deepening their strategic coordination, and strengthening communication and coordination in such important international and regional organizations as the United Nations, the BRICS mechanism and the Shanghai Cooperation Organization.”

Xi further said that the CCP was ready to work jointly with Russia to promote engagement with developing nations in order to shape the international order to better benefit the two countries.

“The Chinese side stands ready to work with the Russian side to push for steady and long-term development of practical bilateral cooperation,” Xi said.

In an announcement of the phone call, a Kremlin spokesperson said that Xi acknowledged the “legitimacy of Russia’s actions in protecting its fundamental national interests in the face of security challenges created by external forces.” The statement was likely a reference to Russian propaganda that the ongoing war in Ukraine was an effort to prevent NATO expansion.

Ukraine was not under consideration for NATO membership at the time of Russia’s invasion in February, and would be denied such membership regardless on the basis that NATO applicants must maintain territorial integrity over all their claimed lands, which Ukraine does not.

The burgeoning alliance between the CCP and the Kremlin has been a growing concern to Western officials since Xi and Putin first announced a “no limits” partnership on Feb. 4.

Since then, Xi has not joined in international sanctions on Russia for the invasion of Ukraine, and the CCP has consistently taken the position that international financial actions against Russia are invalid, thus providing Russia with a vital economic lifeline in Chinese markets.

Moreover, the CCP has come under fire for its apparent support of Russia throughout the ongoing war in Ukraine. The United States accused the CCP of considering providing Russia with military support for the war and, likewise, a report from Ukraine suggested that CCP-affiliated hackers launched a massive cyber attack on Ukraine the day before Putin launched the invasion.

At present, the CCP continues to heavily censor talk of the war on social media within mainland China, and refuses to refer to it as a war, parroting the Russian stance that it is a “special military operation.”

The Kremlin, meanwhile, has announced support for the CCP’s claims on Taiwan and said that it opposes international attempts to influence ongoing events in Taiwan, Xinjiang, and Hong Kong.

U.S. intelligence leaders have warned that the CCP-Kremlin partnership is only likely to deepen in the coming decade, and that this new strategic situation will have profound effects on geostrategy, as the United States has never before faced two near-peer nuclear adversaries simultaneously.

“We are now at a point where we’ll need to share a lot more of our nuclear planning and nuclear operations and how we would resort to nuclear weapons, not just conventional deterrence, but the roles that U.S. nuclear weapons would play in a crisis,” said David Santoro, President of the Pacific Forum, a foreign policy think tank, in April.

“Unfortunately, you know, we sometimes talk about strategic stability as the organizing principle between U.S.-Russia and U.S.-China relations. I don’t think that we are able to reach stability right now. We’re in a very, very bad place with both of them.”

The phone call between Xi and Putin comes less than a week after Chinese defense minister Wei Fenghe threatened to start a war over the issue of Taiwan’s de facto independence, and mere days after Xi announced a sweeping set of 59 new regulations intended to prepare the CCP’s military wing for “non-war” military actions.

There was no immediate clarification as to what qualified as a “non-war” military action in the CCP’s thinking. Russia’s ongoing war in Ukraine, however, presents one possibility of interpretation, given that neither Russia nor China acknowledges the conflict as a war.