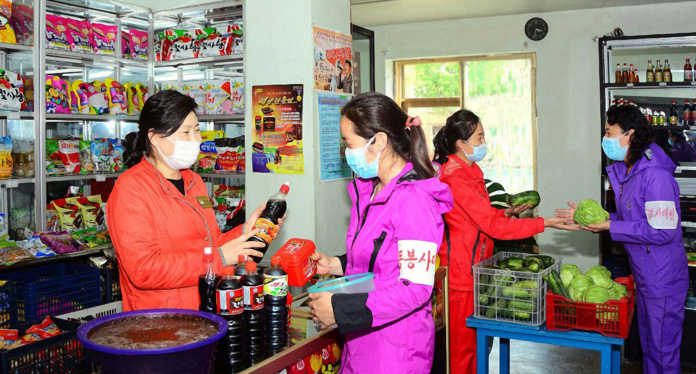 The increase of COVID-19 cases in North Korea is creating knock-on hardships for the families of patients, as the loss of income from quarantine restrictions has left some without enough money to feed themselves.

The cash-strapped North Korean government has responded to reports of family members of COVID patients starving to death, by forcing neighbors to “volunteer” to feed them–but the state isn’t providing any additional food for the effort.

North Koreans have long chafed at being drafted by the state to provide free labor, food, building materials or cash for national projects–orders that come on top of the non-stop struggle to survive on a bleak economy.

A family illness can have devastating consequences in North Korea, where both men and women need to work to earn enough to support their families. Men work in government-appointed jobs, but because their salaries are low, women are expected to earn additional income through side businesses.

“Confirmed COVID-19 cases have increased from the beginning of May. COVID-19 patients were quarantined at the facilities while their families were quarantined in their homes,” a resident from Unsan county in South Pyongan province, north of the capital Pyongyang, told RFA’s Korean Service on condition of anonymity for security reasons.

“An elderly family member of a COVID patient died, unable to eat properly during the 15 days that the patient was in quarantine. It was then that they started organizing the volunteer group,” she said.

The source said that since the beginning of June, each neighborhood, or division and subdivision of each rural town, was directed to operate a group of volunteers to look after the families of quarantining patients.

But the government did not give these groups any extra food to carry out their work, as it is in short supply in the chronically malnourished country.

“The local government provides a certain amount of corn to COVID-19 quarantine facilities, but they don’t give anything, not even a single cabbage, to the families who all quarantine in their homes. There have been cases of elderly people who starved to death … because they were trapped at home, unable to make money, and they had nothing to eat,” she said.

“As the residents’ complaints increased and became stronger, county quarantine command reported these cases to the National Emergency Quarantine Command. When the case was reported to the Central Committee, the authorities organized COVID-19 volunteer groups across the country, including in Pyongyang, and took measures to provide food and water for the elderly and other at-risk people in their quarantine homes,” she said.

The measures included forcing some North Koreans to harvest their own vegetable gardens to give food to the quarantining families, the source said.

While residents do what they can to avoid being tapped to volunteer, authorities tend to target the people with the largest vegetable gardens.

“They complain and ask, ‘Who is this service for?’ The authorities are using us to provide what the government should be providing, and they are taking all the credit,” the source said.

In Uiju county, near China in the northwestern province of North Pyongan, authorities organized volunteer groups there after the death of the child of a woman in her 30s who was away in quarantine, a source there told RFA on condition of anonymity to speak freely.

“She was the breadwinner for her family and her 3-year-old child died of malnutrition as her husband watched at home,” he said.

“The authorities who organized the volunteer groups are appealing to people to show the true face of socialism by displaying the spirit of service that offers generous support and effort. They are asking people to think of those who are facing greater difficulties than they are in the time of COVID-19,” said the second source.

Authorities are forcing better-off citizens to volunteer for at least 10 days and to donate about 30 kilograms (60 pounds) of potatoes each, he said.

“Residents say that if the state wants to take care of the families of COVID-19 patients, the state should be the one that provides the food and vegetables,” the second source said.

After two years of denying the pandemic had penetrated its closed borders, North Korea in May declared a “maximum emergency” and acknowledged the virus had begun to spread among participants of a large-scale military parade the previous month.

Though North Korea has not been tracking confirmed coronavirus cases, possibly due to lack of testing equipment, state media has been publishing daily figures of people who report fever symptoms.

As of Tuesday, 4.53 million people have come down with fever, 72 of whom have died, 38 North, a site that provides analysis on the country and is run by the U.S.-based Stimson Center think tank, reported.