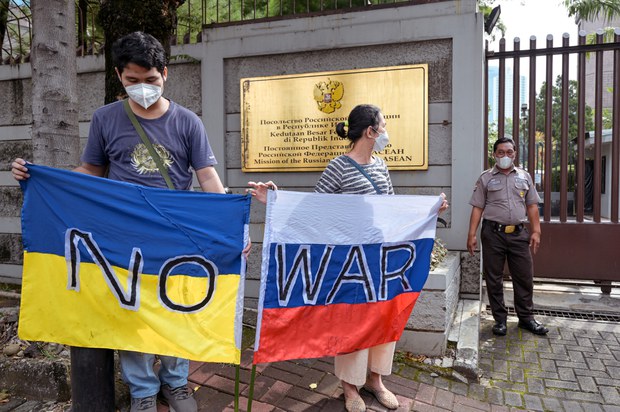 The Russian and Ukrainian ambassadors have turned Indonesia – this year’s G20 chair – into a diplomatic battlefield by holding tit-for-tat press briefings, becoming regulars at local newsrooms and giving interviews to present their versions of what’s happening in the actual warzone.

Take the case of an in-person press conference last week by Lyudmila Vorebieva, Russia’s envoy here. During the interaction with reporters, she claimed that her country’s forces did not target civilians in Ukraine and the Western media had published fake news.

When asked to respond, Ukrainian Ambassador Vasyl Hamianin shot back. He called Vorebieva a liar and war criminal who had “reserved a place in hell.”

The reason for this diplomatic battle is Indonesia’s position as holder of the 2022 presidency of the Group of Twenty leading economies, said Radityo Dharmaputra, an international relations lecturer at Airlangga University in Surabaya.

“For Russia, Indonesia is important because they need to show that not all countries support Ukraine,” Radityo told BenarNews.

“For Ukraine, they need support from countries other than Europe and the United States.”

And Indonesia? It does not have an incentive to support either side, partly because its citizens have no affinity with Russians or Ukrainians, Radityo said.

“Indonesia’s foreign policy tradition in such a situation is to play it safe,” he said.

Indonesia voted for a United Nations General Assembly resolution in March that condemned Moscow’s military strike on Ukraine. But, at the same time, Jakarta has not ever directly criticized Russia or used the word “invasion.”

And still, Indonesia has been drawn into a tug of war between the United States and the European Union on one side and Russia and China on the other, by virtue of being this year’s G20 president.

The U.S. and other Western countries wanted Russia expelled from the group, while China said no member had the right to expel another country.

U.S. President Joe Biden said Ukraine should be able to participate in the G20 summit, which is scheduled for mid-November in Bali, if Russia is not expelled.

Indonesia has been reluctant to disinvite Russia, but has asked Volodymyr Zelenskyy, the president of Ukraine, which is not a G20 member, as a guest.

The Ukrainian government has said that Zelenskyy’s attendance at the G20 summit would “depend mainly on the situation in the battlefield.”

In April, Indonesian President Joko “Jokowi” Widodo said that Russian President Vladimir Putin would attend the summit,  although the Kremlin had not confirmed his participation.

In March, both Vorobieva and Hamianin visited the headquarters of Nahdlatul Ulama (NU), Indonesia’s largest Islamic organization that boasts 80 million followers, only a day apart. They met with NU’s new chairman, Yahya Cholil Staquf, a former advisor to Jokowi.

The two have also given “exclusive” interviews to various Indonesian media outlets.

At last week’s press conference, Vorobieva repeated Moscow’s assertions that what happened in Ukraine was the result of the West’s “anti-Russian project.”

“They’re actually spreading terror, people were fearing and are still fearing. You will not see that in the Western media, but we see it every day,” she said.

“The oppression Russia committed over Ukraine during the last 30 years, the non-stop blackmailing, nonstop humiliation, like territorial attacks and all that, especially the last eight years … is what turned Ukraine into anti-Russia,” he said.

“I’m absolutely sure that by saying this, she booked her personal seat on the bench of war criminals in The Hague tribunal, and definitely reserved a place in hell,” he said, referring to the International Court of Justice, based in the Netherlands.

Hikmahanto Juwana, an international law professor at the University of Indonesia, said winning the hearts and minds of people in the world’s fourth most populous country was important for Russia and Ukraine.

“The Indonesian public needs to be propagandized so that the government takes a position that is in line with public aspirations,” Hikmahanto told BenarNews.

Alvin Prasetyo in Jakarta contributed to this report by BenarNews, an RFA-affiliated online news service.