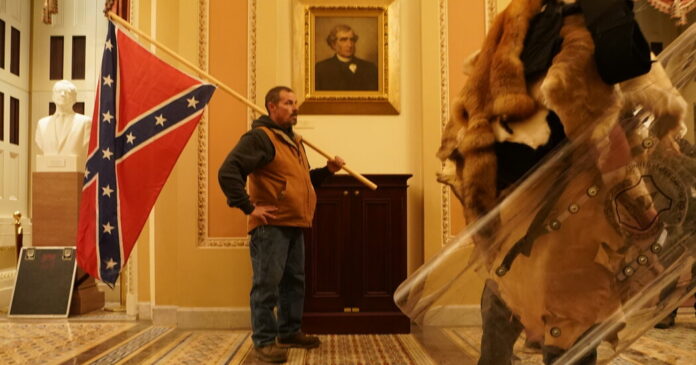 A Delaware man who flew a Confederate battle flag inside the Capitol on Jan. 6, 2021, was convicted with his son on Wednesday by a federal judge of the top count in their indictment: obstructing the certification of the 2020 presidential vote.

The two men, Kevin and Hunter Seefried, were also found guilty at the bench trial by Judge Trevor N. McFadden of four misdemeanors, including disorderly conduct and illegally entering a restricted area.

The daylong trial, in Federal District Court in Washington, was the eighth case connected to the Jan. 6 attack to have gone to trial. In seven of the cases, defendants have been found guilty — often with exceptionally quick deliberations — of crimes including obstruction, theft of property and trespassing. One case, also heard by Judge McFadden, resulted in a full acquittal.

During the Seefrieds’ trial, prosecutors argued that the father and son were among the first wave of the rioters to breach the Capitol on Jan. 6., climbing in through a broken window near the Senate wing door that other attackers had just shattered. Hunter Seefried had been charged with helping to break the window by plucking out a shard of glass that remained in the frame, but Judge McFadden acquitted him of the count.

A key witness at the trial was Officer Eugene Goodman, whose actions on the day of the attack were captured in a widely circulated video recorded by a reporter in the Capitol. Officer Goodman, who was later honored with a featured invitation to President Biden’s inauguration, was instrumental in leading a pack of rioters away from lawmakers inside the House and Senate chambers.

During his time on the stand, Officer Goodman testified that some of the rioters sprayed him with what he believed to be bear spray, threw objects at him and tried to shake him and other officers off scaffolding. He also recounted throwing up in reaction to the tear gas deployed by Washington’s Metropolitan Police when they arrived to reinforce the Capitol Police, who had been overrun.

“It looked like something out of medieval times, where you see one big force fighting another force,” Officer Goodman said.

Officer Goodman also testified that he had attempted to prevent Kevin Seefried from progressing toward the Senate chamber and that Mr. Seefried “jabbed” at him three times with the Confederate flag.

The obstruction count that both men were convicted of carries a maximum sentence of 20 years in prison, but rioters who have been found guilty of the crime have received far shorter sentences.