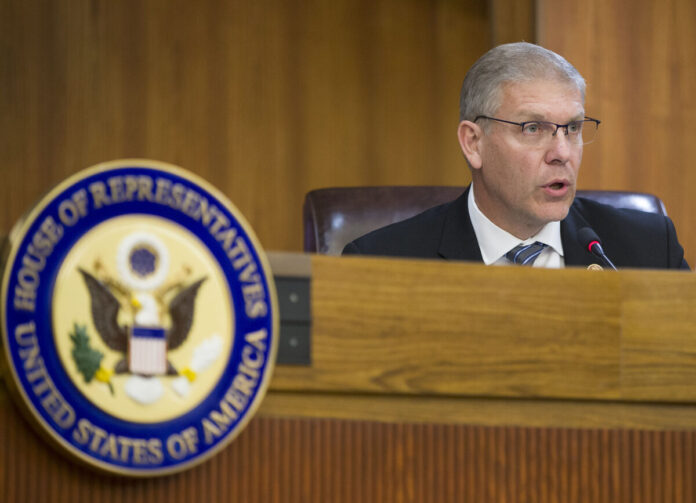 A tour of a building near the U.S. Capitol in Washington on Jan. 5, 2021, “raises concerns,” according to the head of the House of Representatives panel investigating the U.S. Capitol breach on Jan. 6.

Rep. Bennie Thompson (D-Miss.), the chair of the panel, released video footage and still images on Wednesday showing individuals with Rep. Barry Loudermilk (R-Ga.) on the day before the breach inside of the Rayburn, Longworth, and Cannon House Office Buildings, which contain offices of members of Congress.

A man who was part of the tour appeared to take photographs of a staircase, while multiple people snapped pictures of a tunnel that leads to the Capitol, according to the newly published materials.

“The behavior of these individuals during the January 5, 2021 tour raises concerns about their activity and intent while inside the Capitol complex,” Thompson said in a letter (pdf) to Loudermilk.

He reiterated a request for an interview to ask questions regarding the tour.

The letter came one day after it became known that the U.S. Capitol Police analyzed the tour in question for any suspicious behavior.

“We train our officers on being alert for people conducting surveillance or reconnaissance, and we do not consider any of the activities were observed as suspicious,” said Thomas Manger, chief of the police force.

Manger said Loudermilk led a tour of about 15 people but that there was no evidence the group went to the Capitol or entered any tunnels leading to the Capitol, noting that police officers were blocking the entrances at the time.

“The Capitol Police already put this false accusation to bed, yet the Committee is undermining the Capitol Police and doubling down on their smear campaign, releasing so-called evidence of a tour of the House Office Buildings, which I have already publicly addressed,” Loudermilk said in a statement shortly after Thompson’s letter went public. “As Capitol Police confirmed, nothing about this visit with constituents was suspicious. The pictures show children holding bags from the House gift shop, which was open to visitors, and taking pictures of the Rayburn train.”

Loudermilk said the Jan. 6 panel did not contact him before releasing the missive. The same pattern played out in May, when Thompson and panel vice chair Liz Cheney (R-Wyo.) attempted to link the Loudermilk tour to alleged reconnaissance tours that members led in the days leading up to the Capitol breach.

“This type of behavior is irresponsible and has real consequences—including ongoing death threats to myself, my family, and my staff,” Loudermilk said.

The congressman has thus far declined requests to be interviewed by the panel, which is dominated by Democrats and includes just two Republicans, both of whom are harsh critics of former President Donald Trump.

Thompson, meanwhile, also released video footage that showed one of the men who was part of the tour outside the Capitol on Jan. 6 and making threats against members.

“While we had hoped to show you the video evidence when you met with us, and since you have thus far declined, the Select Committee provides the video in question for your review,” Thompson said, sharing a link to the video.

The man in question does not appear to have been charged.

“Nowhere that I went with the visitors in the House Office Buildings on January 5th [was] breached on January 6th; and, to my knowledge, no one in that group was criminally charged in relation to January 6th,” Loudermilk said.