Herschel Walker, Critic of Absentee Fathers, Has a Second Son He Doesn’t See 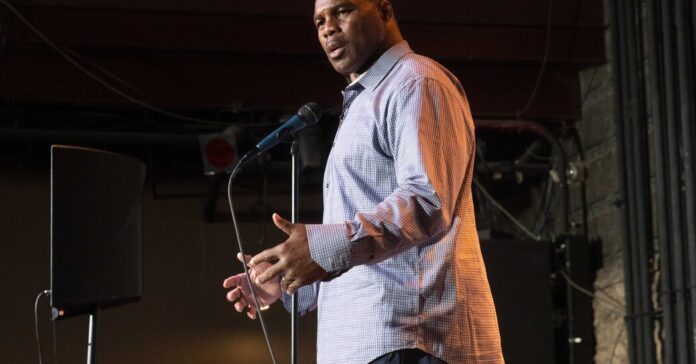 Herschel Walker, the Republican nominee for Senate from Georgia, who has often spoken out against absentee fathers, particularly in Black households, on Tuesday publicly acknowledged having fathered a second son with whom he is not in contact.

The admission came in response to a report by The Daily Beast, which said it had confirmed the 10-year-old boy’s parentage but withheld his name and that of his mother. It said the child’s mother had sued Mr. Walker a year after giving birth to obtain a declaration of paternity and child support, and that the suit lasted until August 2014, when Mr. Walker was ordered to pay child support. The boy, by then more than 2 years old, took Mr. Walker’s last name.

Mr. Walker, who faces Senator Raphael Warnock, a Democrat, in November, has praised his relationship with his 22-year-old son, Christian, in interviews and campaign speeches.

At the same time, he has repeatedly criticized fatherless homes in Black communities: In a 2020 interview with the conservative activist Charlie Kirk, he called the absence of fathers “a major, major problem” in Black households and boasted of having been “like a father” to many young people in his hometown in Georgia.

And in a 2021 interview with the Black conservative media personalities Diamond and Silk, Mr. Walker lamented that “the father leaves in the Black family. He leaves the boys alone so they’ll be raised by their mom,” comparing the dynamic to family separations during slavery.

Aides to Mr. Walker declined to comment on Tuesday, instead issuing a written statement from his campaign manager, Scott Paradise, who sought to downplay the disclosure.

“Herschel had a child years ago when he wasn’t married,” Mr. Paradise said in the statement. “He’s supported the child and continues to do so. He’s proud of his children. To suggest that Herschel is ‘hiding’ the child because he hasn’t used him in his political campaign is offensive and absurd.”

But Bakari Sellers, the former Democratic state lawmaker from South Carolina, acerbically accused Mr. Walker of hypocrisy, writing on Twitter that he was “out here lecturing black men on fatherhood and ain’t seen his kid since Obama’s first term.”

The development is the latest and potentially the most damaging of a number of reports detailing Mr. Walker’s exaggerations and outright falsehoods concerning his life before entering politics. He has falsely claimed that he worked as a member of law enforcement in Georgia and with the F.B.I. in Quantico, Va., according to The Atlanta Journal-Constitution. He has also exaggerated his business record as the owner of a poultry company that collapsed years before he ran for office.

Mr. Walker’s opponent in the Senate race, Mr. Warnock, is contending with his own child custody dispute with his ex-wife, who has sued to have his child support payments “recalculated” given his increased income since taking office last year.

Mr. Warnock’s campaign did not immediately respond to requests for comment.