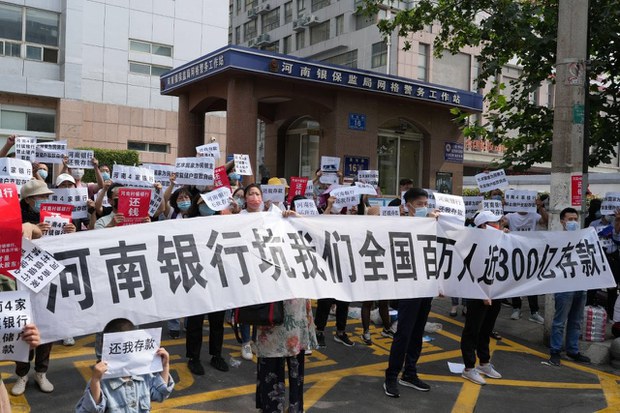 Authorities in the central Chinese province of Henan have been using the COVID-19 Health Code app to control the movements of protesters over failures at rural banks, according to social media posts.

Some 400,000 customers of four rural banks were left unable to withdraw their money after an estimated U.S.$1.5 billion in assets were frozen in mid-April, according to Caixin magazine.

The China Banking and Insurance Regulatory Commission (CBIRC) has said it is paying close attention to the four village lenders who stopped offering online banking services, was working with local authorities to resolve the issue, it said.

“Many customers from wealthy southern and eastern regions deposited huge sums into these village banks for high interest rates and cash rewards,” it said.

Some of the depositors staged — or tried to attend — street protests, but posted that their COVID-19 health codes had turned red, preventing them from going.

The ruling Chinese Communist Party (CCP) has imposed an electronic traffic light system on all citizens, ostensibly to control people’s movements, trace close contacts of those infected, and limit community transmission of the virus.

But the reports suggest the authorities could turn it to other purposes, preventing people from petitioning over government wrongdoing or protesting against injustice.

A video clip posted to social media on Monday showed more than 20 people holding up placards in front of the Chongqing branch of the CBIRC.

The CCP-backed Global Times newspaper cited several would-be protesters as saying that their health codes had turned red on arrival in Henan’s provincial capital Zhengzhou, despite their having a negative PCR test from within the past 48 hours.

The paper quoted Henan officials as saying that “errors in the database” could be the reason for the sudden changes in creditors’ health codes.

The Henan provincial health commission has said it is looking into the reports.

U.S.-based legal scholar Teng Biao said the local government, if they did indeed use the health code app to control people’s movements, could have violated three Chinese laws.

“The first is the Personal Data Protection Law, as it would be a violation of the right to personal privacy,” Teng said. “It could also involve illegally obtaining or leaking citizens’ personal information.”

“It could also be in breach of the Law on the Control and Prevention of Infectious Diseases,” he said, adding that that law forbids false reporting of disease-related information, and that this could constitute a crime in cases deemed “serious.”

“This case is fairly serious because so many people are involved,” Teng said. “The officials concerned could also be abusing their power, which is provided for in the Criminal Law.”

Teng said he thought it unlikely that anyone would be held accountable, even if they were shown to have misused the app.

Rights attorney Xie Yang had his health code turn red when he traveled to Shanghai to meet up with the mother of jailed citizen journalist Zhang Zhan.

“They are abusing disease control and prevention measures, abusing the health code app, for political purposes, to restrict the freedom of rights defenders to travel,” Teng said.

Shanghai resident Li Bing said similar issues are appearing in the city, which is still imposing strict controls on residents’ movements despite announcing an end to lockdown on June 1.

“Everything just keeps getting better and better,” Li said sarcastically, when asked about the health code app.

“This is going to get worse in future, as the CCP increasingly employs digital totalitarianism,” he said.