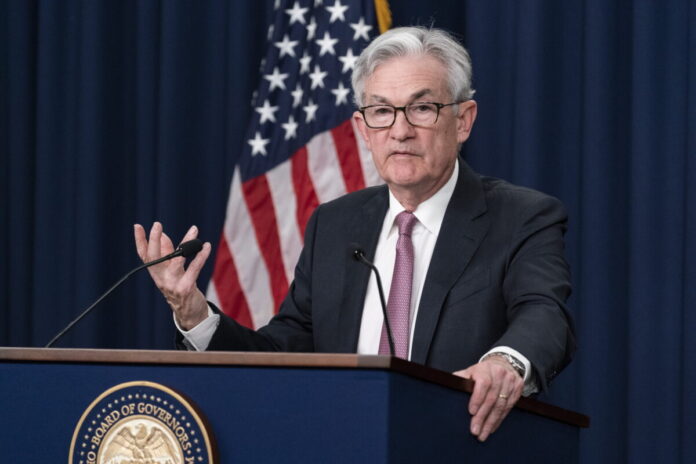 Investors have sharply raised their expectations that the Federal Reserve will on Wednesday deliver the biggest single interest rate hike in 28 years amid red-hot inflation and a turbulent selloff across world markets.

But the expectation landscape for the scale of the Fed’s rate move has dramatically shifted, spurred by a violent selloff in risk assets and a sharp rise in bond yields following last week’s consumer price inflation data that showed inflationary pressures accelerating.

Investor bets as reflected in the Fed Watch tool are now showing zero probability for a 50 basis point hike and a whopping 95.6 percent probability of a 75 basis point increase when Fed Chair Jerome Powell announces the central bank’s rate decision later on Wednesday.

A rate hike of 0.75 percentage points would be the biggest increase since 1994 and would put the target rate at between 1.50 percent and 1.75 percent.

“The Federal Reserve typically delivers what is discounted, which makes a 75 [basis point] hike likely today,” ING analysts said in a note.

What’s more, a growing number of investors expect an even sharper, 100 basis point increase on Wednesday, with futures contracts ascribing a 4.4 percent probability for a full percentage point hike, as of the time of reporting.

The market rout that has left equities and other risk assets battered gained steam on Tuesday, when producer price inflation data came in hot, adding to concerns that consumer price growth would be stuck in high gear for longer as input costs tend to get passed on to households.

The benchmark S&P 500 on Monday fell into a bear market—defined as a drop of over 20 percent from a recent high—and on Wednesday morning remained down around 22 percent from an all-time high reached in January.

In the Treasuries market on Tuesday, U.S. two-year yields, which are highly sensitive to rate expectations, soared to 3.439 percent, the highest in 15 years. Also on Tuesday, the yield curve between two-year and 10-year notes briefly inverted, which is widely viewed by investors as a red flag suggesting an incoming recession.

Analysts at ING predict that Treasury rates will climb further, though they say that “discounting a recession is still premature.”

“Better for now to discount an uppity economy, with too much inflation and a labour market that is still far too tight,” they said, adding that “it still does not feel like market rates have yet peaked” for U.S. Treasurys.

Oliver Allen, a markets economist at Capital Economists, echoed that sentiment in a recent note, saying that because inflationary pressures in the United States “show little sign of easing, we doubt that the Fed will take its foot off the brakes anytime soon.”

“We therefore suspect that more pain is yet in store for U.S. asset markets, with Treasury yields rising further and the stock market remaining under pressure,” he wrote.