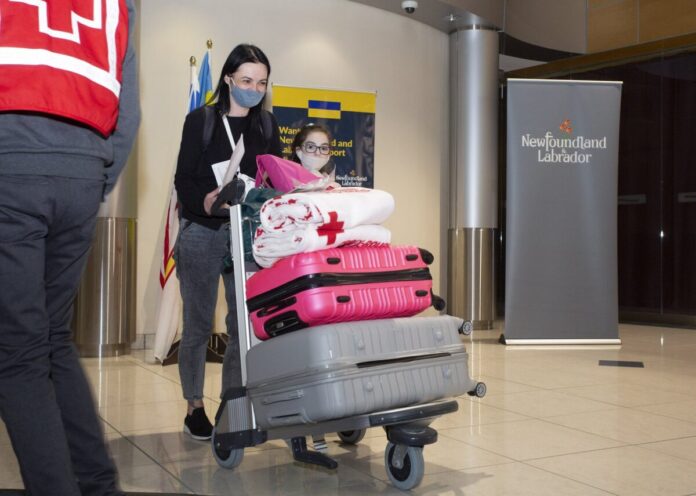 As a plane carrying 177 Ukrainian refugees touched down in St. John’s, N.L., Tuesday night, Pamela Ryder Lahey was at the front of the crowd inside the airport waiting for five young people to walk through the gates.

The retired chief executive officer of the Newfoundland and Labrador Supreme Court has spent the past months securing the five 21-year-old graduate students a spot at Memorial University in St. John’s. She also found them a four-bedroom house and raised enough money to ensure their rent was paid, their fridge was stocked and their beds were warm and waiting.

“We are here because of this great woman,” said Angelina Schevchenko, pulling Ryder Lahey into a tight hug. Schevchenko said she was thrilled to be in Newfoundland, where she’ll start a master’s degree in social enterprise and entrepreneurship.

But it was also hard to leave her homeland, she said, and the four others she travelled with agreed.

The plane Tuesday was the second airlift chartered by the Newfoundland and Labrador government to bring Ukrainians fleeing Russian attacks to Canada’s easternmost province. The first arrived on May 9, carrying 166 passengers.

The plane departed from Warsaw, Poland, where the province set up a satellite office in March to help Ukrainians resettle in Newfoundland and Labrador.

Immigration Minister Gerry Byrne was at the airport to welcome each person, family and pet. With the 177 people arriving Tuesday night, Byrne said the province has welcomed 478 refugees since the Russian army first advanced on Feb. 24.

“We’re building a community of Ukrainians in Newfoundland and Labrador,” he told reporters before the flight arrived.

Everyone on board the plane had at least temporary accommodations arranged, and a school bus waited outside the airport to take them there. Some on the plane, like Schevchenko and her four friends, had people like Ryder Lahey waiting to take them to a new, long-term home where a new life was waiting.

Ryder Lahey said she worked on two projects in Ukraine where she met Schevchenko’s mother in Kyiv.

“She contacted me when the war started and asked if there were any Canadian universities that might have a special program for Ukrainian students,” Ryder Lahey said.

The five students now have full scholarships to do their master’s degrees at Memorial University.

“So it’s through a woman in Ukraine to me that we now have this relationship with these students,” she said. “We’re so happy to have them here.”

Dmytro Gerdsen and his family also had someone waiting in St. John’s to help them. He arrived Tuesday with his wife, mother and six-year-old son, and he said he felt hopeful for the future.

“We are open to your people, to friendship and I hope we will live here a long time,” said Gerdsen. “And maybe my son will be prime minister in 20 or 30 years.”

Before that, however, Gerdsen said he and his family were looking forward to a good night’s sleep.