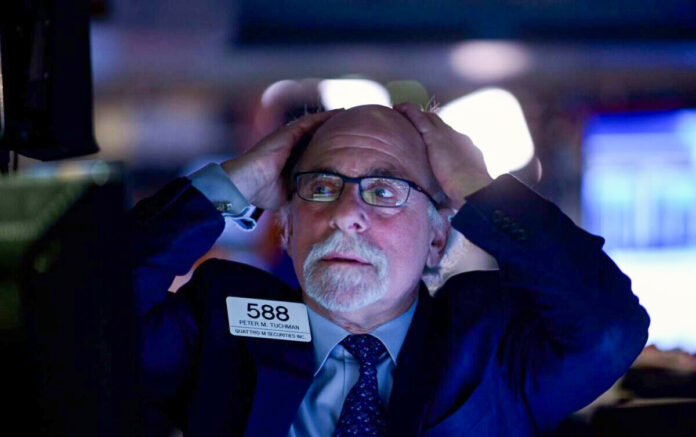 Less than a month after the S&P 500 temporarily slipped into bearish territory, the benchmark stock market index officially fell into a bear market at the closing bell on Monday.

Year-to-date, the S&P 500, comprised of Apple, Berkshire Hathaway, and Tesla Motors, has tumbled nearly 22 percent. The index now joins the tech-heavy Nasdaq Composite Index in a bear market. The Nasdaq has plummeted more than 31 percent so far this year.

All eyes will be on the Dow Jones Industrial Average to see if it will be the next domino to fall on the New York Stock Exchange. The Dow Jones, maintaining exposure to American Express and Coca-Cola, has dropped about 17 percent year-to-date.

What We Know About Bear Markets

Historically, bear markets have been relatively short-lived, lasting an average of about 9.6 months. By comparison, bull markets enjoy an average length of 2.7 years.

When it comes to how deep this bear market could go, Goldman Sachs recently estimated that it could slide to approximately 3,650. Investment bank strategists came up with this figure by calculating that the S&P 500 slumped from peak to trough by a median rate of 24 percent across 12 recessions. This would mean that the index still has about another 3 percent before it could bottom.

Peak to trough is defined as the stage of the market cycle from the end of the growth period and into contraction activity.

But some analysts contend that investors could be targeting a 30 percent decline, particularly because the nine markets that recorded a selloff of more than 25 percent recorded an average peak-to-trough drop of 38 percent.

According to data from LPL Research, if the economy slips into a recession, the bear market could intensify, falling close to 35 percent on average and lasting nearly 15 months.

All About the Recession

Recession and inflation fears have been the contributing factors to the selloff in the equities arena.

Investors are starting to price in that the Federal Reserve would pull the trigger on a 75-basis-point interest rate increase during this week’s Federal Open Market Committee (FOMC) policy meeting as part of efforts to combat rampant inflation.

Traders also kept a close eye on the U.S. Treasury market on Monday as the yield on the 2-year and 10-year inverted for the third time this year.

The market considers this a top recession indicator since it has predicted seven of the last eight recessions. Experts use it as a go-to metric because it highlights that investors expect a decline in long-term interest rates amid declining economic activity.

But will a bear market be the gateway to the second recession in two years and higher unemployment?

According to Hartford Funds, there have been 26 bear markets since 1929, but only 15 recessions.

The unemployment rate has typically ticked higher during bear markets. In 1962, for example, when the bear market lasted for six months and the S&P 500 slumped 28 percent, the jobless rate was 5.5 percent.

Of course, today’s labor market is hot, with the U.S. economy nearly recovering all of its jobs lost during the pandemic. Whether this bear market will douse the sizzling jobs market or not remains to be seen.

Still, market analysts warn that the various developments in the global economy are setting the stage for an economic downturn at home and abroad.

“The financial markets have struggled in their worst start to a year in decades,” said John Lynch, chief investment officer for Comerica Wealth Management, in a research note on Monday (pdf). “Surging inflation, the pivot in Fed policy, and historically pricey equity valuations were on the minds of investors as the year began, but the combination of COVID-19 lockdowns in China and Russia’s invasion of Ukraine has escalated volatility further with investors becoming increasingly concerned about the possibility of global recession sometime within the next year.”

Other prominent Wall Street figures think the chances of a recession are growing.

During the virtual 2022 Sohn Investment Conference, billionaire investor Stanley Druckenmiller warned that the United States would experience a recession next year.

“Inflation has never come down without a recession and I think a recession is in the cards,” Druckenmiller told Stripe co-founder John Collison. “Given the extent of the asset bubble and the destruction in the markets; given what’s going on in Ukraine, given the zero-COVID policy in China … I strongly assume we are going to have a recession sometime in 2023.”

Speaking at a conference hosted by the Wall Street bank, Morgan Stanley CEO James Gorman revised his forecast and told investors that the odds of a recession are 50 percent.

Jeremy Siegel, a professor of finance at the Wharton School of the University of Pennsylvania, told CNBC on Friday that the market has started “discounting a recession in 2023.”

“I think we’re pricing in a mild recession,” he stated. “I’m not saying how severe the recession actually will be.”

Mark Zandi, Moody’s chief economist, placed the odds at 35 percent in the next two years, which is roughly in line with what Goldman Sachs anticipates.

“The risk of the economy entering into a recession at some point over the next 12, 18, 24 months is very high, uncomfortably high. And I’d say [it’s] rising,” Zandi stated during an April webinar.

Since the beginning of the coronavirus pandemic, any time there had been a decline in the market, the clarion call of investors had been to buy the dip.

Is this the same opportunity? BlackRock is not hitting the buy button just yet.

“We’re not buying the stock dip because valuations haven’t really improved,” BlackRock strategists said in a note Monday. “There’s a risk of Fed overtightening, and profit margin pressures are mounting.”

Morgan Stanley strategists, led by Michael J. Wilson, noted in May that “it’s too early to get bullish.”

According to the American Association of Individual Investors’ survey of individual investor sentiment, 47 percent of investors are feeling bearish about the stock market over the next six months.

But the consternation among investors is not equal.

Last month, a Bankrate survey revealed that younger investors are using the market selloff to their advantage and buying the dip. The poll found that 43 percent of Generation Zers and 27 percent of millennials plan to invest more this year.

“Gen Z and millennial investors willing to invest more in stocks this year, despite market volatility and inflation, can see greater long-term reward for the discipline of hanging on and buying more at lower price points,” said Greg McBride, chief financial analyst and senior vice president at Bankrate, in a statement.

While timing the bottom can be a challenging feat, investment experts argue that if investors are buying the dip, they should be holding these securities for the long term. One strategy could be to dollar-cost average down these trading positions to reduce costs and minimize risks to weather the storm, strategists say.