Trump Says Jan. 6 Hearings a ‘Smoke and Mirrors’ Show to ‘Change the Narrative of a Failing Nation’ 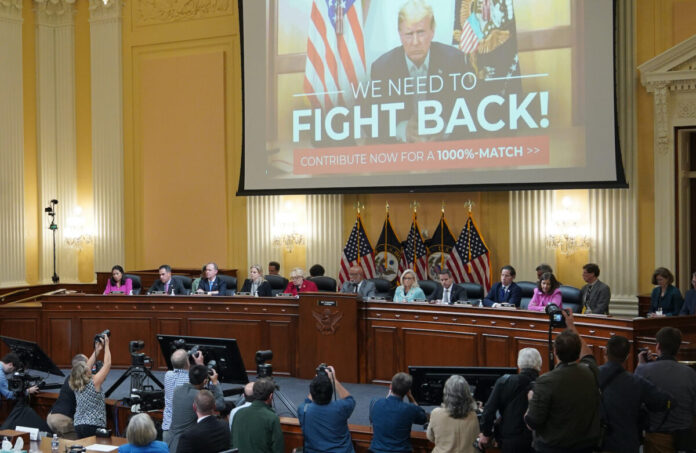 Former President Donald Trump has issued a 12-page rebuttal statement calling the House January 6 Committee hearings a “smoke and mirrors show” to distract from the economic and social upheavals Americans are enduring under the Biden administration.

“Seventeen months after the events of January 6th, Democrats are unable to offer solutions. They are desperate to change the narrative of a failing nation, without even making mention of the havoc and death caused by the Radical Left just months earlier,” Trump said, referring to the often destructive Black Lives Matter protests that raged across the country in 2020.

In its first hearing on June 9, the select committee presented evidence and testimony that favored their narrative on the violence at the Capital in early 2021, during a televised hearing that did not include rebuttal witnesses. Critics have blasted the hearings as overtly partisan.

The prime-time broadcast painted the 45th president as orchestrating the violence at the Capitol in early 2021 as part of a “coup” to remain in power and nullify the 2020 election results.

The committee continued their hearings on Monday, this time not televised in prime time, which focussed on witness testimony contesting Trump’s claims of widespread election fraud in the 2020 general elections, which they argue are baseless.

In his 12-page statement (pdf), Trump said the select committee is “making a mockery of justice” by denying him the constitutional right to confront his accusers, have a fair trial, have legal representation, equal representation, and the opportunity to offer rebuttal evidence.

“They have refused to allow their political opponents to participate in this process, and have excluded all exculpatory witnesses, and anyone who so easily points out the flaws in their story,” he said.

The 45th president argued that the Jan. 6 Committee broadcast their witnesses to the world on prime time national television while “MAGA witnesses” were interrogated behind closed doors and ordered to not record their own testimony.

“The American public has a right to know the truth and see every witness, but these corrupt officials are trying to force-feed the public with their politically opportune sideshow,” Trump said.

Trump accused the Democrats of staging the select committee hearing to attack him for “leading in every poll” in a bid to stop a potential 2024 run, and to avoid discussing more pressing economic issues they caused.

“The reason I am leading in the polls is because Democrats have caused record inflation, sky high gas prices, energy dependence on our adversaries, the education system is in crisis, illegal aliens are invading our border, the supply chain has crippled our way of life, parents can’t get baby formula, mandates have crippled businesses, and our way of life has been crushed by government regulations,” he said.

“The United States is being destroyed. The Democrats know that I would correct all of this, and they are doing everything in their power to stop me—but we can’t be stopped. We have to Save America.”

‘Why Would Anyone Need to Vote 10 Times?’

At Monday’s hearing, the select committee’s chair, Bennie Thompson (D-Miss.), contended that Trump knew he lost the 2020 election but “decided to wage an attack on our democracy.”

Much of Trump’s rebuttal statement laid out his argument for disputing the results of the 2020 general elections, which pointed to the vote counting stopping on election night, other irregularities, and allegations of ballot trafficking in multiple states.

To back up his allegations of ballot trafficking, Trump cited evidence presented by the vote-monitoring organization True the Vote in the 2022 documentary “2000 Mules.”

The documentary alleges that illegal ballot trafficking took place on a scale significant enough to have flipped the 2020 elections.

For a year and a half, True to Vote analyzed cellphone data and ballot drop box surveillance videos to show patterns of what they call illegal ballot trafficking during the 2020 elections.

True to Vote used geo-fencing data to isolate and identify potential mules by searching cell phone data that had been to 10 or more ballot drop boxes while also visiting at least five identified nonprofit organizations during a two-week period.

“There’s no legitimate reason for any individual to visit 10 or more ballot drop boxes. Why would anyone need to vote 10 times?” Trump said. “Couple that with the idea that the same individuals are also visiting the offices of liberal nonprofits in the same time period.”

Trump said this same type of geo-fencing evidence was used by the FBI to identify Jan. 6 protesters and in 45 criminal cases against them.

“The January 6th Unselect Committee is disgracing everything we hold sacred about our Constitution. If they had any real evidence, they’d hold real hearings with equal representation,” Trump said.

“They don’t, so they use the illegally-constituted committee to put on a smoke and mirrors show for the American people, in a pitiful last-ditch effort to deceive the American public … again.”