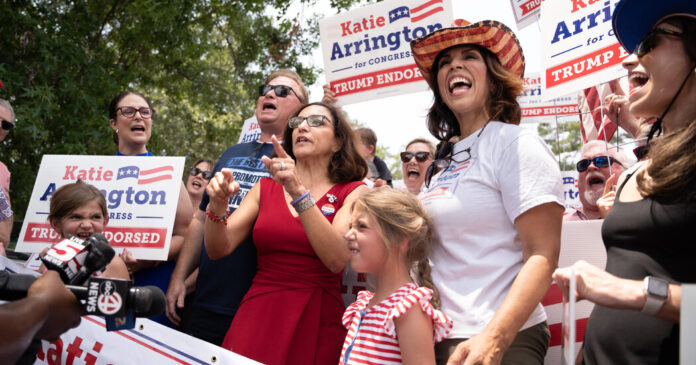 Representatives Tom Rice and Nancy Mace of South Carolina were hoping to avert defeat on Tuesday at the hands of Republican primary challengers endorsed by Donald J. Trump, even as scrutiny of the former president following his 2020 defeat intensifies.

Both incumbents had crossed Mr. Trump as he struggled to maintain power after the Jan. 6 attack, which is now under the spotlight of congressional hearings. Mr. Rice, a staunch conservative in a conservative coastal district, was one of 10 House Republicans who voted to impeach him for inciting the riot. Ms. Mace, in her first speech as a newly elected freshman, said Mr. Trump bore responsibility for the deadly mayhem, though she did not vote to impeach him.

Beyond South Carolina, Mr. Trump’s sway was being tested in Nevada, where a series of Republican primaries were pitting candidates from Mr. Trump’s wing of the party against more mainstream conservatives.

The South Carolina contests have their own dynamics — Mr. Rice was defiant and contemptuous of Mr. Trump to the end, while Ms. Mace tried hard to regain the good graces of Trump administration officials if not Mr. Trump himself. But their defeats would hold deep meaning to the party as it considers whether to renominate the former president for another White House run.

Speaking with a handful of reporters after casting her ballot in Charleston, Ms. Mace said Tuesday that she remained confident about her campaign’s chances, describing herself as “cautiously optimistic.” Across the street, supporters of her opponent taunted her with chants of “Katie! Katie! Katie!”

Tuesday’s elections come at something of a midpoint in a Republican primary season that has delivered decidedly mixed signals to party leadership. Mr. Trump has claimed some significant wins, propelling his chosen Senate candidates to primary victories, such as J.D. Vance in Ohio and Mehmet Oz in Pennsylvania. However, his endorsed candidates have lost primary showdowns for governor in Georgia and Nebraska as well as a key secretary of state race in Georgia.

Still to come are contests that rank high on his vengeance list, such as Representative Liz Cheney’s primary in Wyoming on Aug. 16. Ahead of Arizona’s Aug. 2 primary, Mr. Trump has backed Kari Lake, a promoter of his false stolen-election claims, to be the state’s next governor. To take on Senator Mark Kelly of Arizona, he picked Blake Masters, who was caught on tape promoting the conspiracy that one-third of the people outside the Capitol on Jan. 6 were F.B.I. agents. Republican leaders worry that Mr. Trump will soon back Missouri’s disgraced former governor, Eric Greitens, for an open Senate seat.

In South Carolina, Mr. Rice was only the second of the 10 Republicans who voted to impeach Mr. Trump to take his case for re-election to primary voters of the party. The other, Representative David G. Valadao of California, clings to a slim lead over a Trump-aligned challenger, as vote counting continues after the primary there last week. If Mr. Rice loses, half of the 10 would not be returning to Congress next year, with other contests still to come, including Ms. Cheney’s uphill climb.

A loss for Ms. Mace might be even more ominous for any Republican who might cross Mr. Trump. While she voted to certify President Biden’s victory, she generally avoided overt clashes with Mr. Trump, framing her initial condemnation of his actions on Jan. 6 as situational anger: “Everyone knows I was unhappy that day,” she has said.

The Trump administration’s most prominent South Carolinians — former Gov. Nikki Haley, who served as United Nations ambassador, and former Representative Mick Mulvaney, Mr. Trump’s budget director and acting chief of staff — both backed Ms. Mace for re-election, concerned that the party could lose the seat in the fall if Ms. Arrington prevailed.

The same scenario played out in 2018, when Ms. Arrington challenged then-Representative Mark Sanford after he castigated Mr. Trump. Ms. Arrington, a former state lawmaker, won the primary, then lost the general election to a Democrat, Joe Cunningham.

If Republicans were searching for signals in South Carolina about Mr. Trump’s hold on the party, they were also expecting harbingers of potential victories in November elsewhere. In a special election in Texas on Tuesday, Republicans were hoping to grab the Rio Grande Valley seat of Representative Filemon Vela, a Democrat who resigned in March, and shave the Democrats’ razor-thin majority even closer.

A win in the special election for the Republican candidate, Mayra Flores, may foreshadow broader Republican gains, especially with Hispanic voters in South Texas and beyond. Ms. Flores raised 16 times the amount logged by her closest Democratic competitor, Dan Sanchez.

Republicans are also hoping a win by Ms. Flores, the wife of a Border Patrol agent, will boost their candidates in two other border-area districts in Texas.

An outright victory for Ms. Flores could shed light on the splintering of the Latino vote in South Texas, where Hispanic residents have often been overlooked by national campaigns and disenfranchised from the state’s electoral process.

The presumption had been that greater Latino turnout would benefit Democrats, but South Texas has emerged as a key battleground after Mr. Trump saw swings in his favor in 2020 in Latino and largely rural, working class counties near the border. The gains have left Republicans believing they have a chance to make those inroads permanent and have caused Democratic infighting over the best approach to counter the Republican enthusiasm.

Republican candidates have largely sought to align themselves with Mr. Trump, taking hard right stances on abortion, guns, immigration and the teaching of race and gender in schools.

In the Nevada governor’s race, Clark County Sheriff Joe Lombardo was expected to win the Republican nomination on Tuesday and go head-to-head with Mr. Sisolak in November. He secured Mr. Trump’s endorsement and had about $3 million cash on hand as of April. He had been criticizing the governor for his mask mandates and his handling of the coronavirus pandemic.

Mr. Sisolak, who had more than $9 million in campaign cash, abandoned the state’s mask mandate in February and has been heavily promoting Nevada’s economic rebound and the billions of dollars pumped into the state from federal coronavirus relief packages.

Ms. Cortez Masto is likely to face Adam Laxalt, who ran Mr. Trump’s push to overturn the state’s 2020 election results. Mr. Laxalt — a former state attorney general and the grandson of a former Nevada governor and senator — must hold off a late surge from Sam Brown, a veteran. Mr. Brown was gravely wounded fighting in Afghanistan and has been running as Mr. Trump’s true acolyte.

Another backer of Mr. Trump’s campaign to reject the 2020 election results, State Assemblyman Jim Marchant, was expected to win his party’s nomination for secretary of state, a post that would allow him to oversee the 2024 election.

Some House contests in Nevada are showing even clearer lines between the Trump wing of the party and more traditional Republicans. The potential Republican challengers to Representative Steven Horsford, a Democrat, include Sam Peters, an insurance agent backed by the far-right Arizona congressmen Paul Gosar and Andy Biggs, as well as Annie Black, a more mainstream assemblywoman running in the primary against Mr. Peters.

Five Republicans hope to challenge Representative Susie Lee, a Democrat. Among them is April Becker, a real estate lawyer who has raised the most money by far and has the backing of the House Republican leader, Representative Kevin McCarthy.

Representative Dina Titus, a Democrat, has eight Republicans competing to challenge her, including a former House member, Cresent Hardy. But Carolina Serrano, a Colombian American immigrant, has the backing of both Republican leaders and the Trump world, with endorsements from Representative Elise Stefanik of New York, the party’s No. 3 House leader, as well as Mr. Laxalt and Richard Grenell, a former national security official in the Trump administration.

In Nevada, where the late Senator Harry Reid and the state’s Culinary Union built an influential Democratic political machine, a racially diverse coalition of working-class and Latino voters has powered crucial Democratic victories in presidential elections since 2008. But the president’s party tends to lose ground in midterm elections — particularly true for Democrats in Nevada. Democratic turnout in the midterms in the state has tended to take a sharp nosedive, favoring Republicans.

Not helping Democrats in Nevada is a slight decrease in the number of registered party members in the state and a tourist-driven economy that weathered a hard hit from the coronavirus pandemic. The combination of factors has left Democratic leaders and candidates open to criticism of the skyrocketing costs of rent, gasoline and groceries.