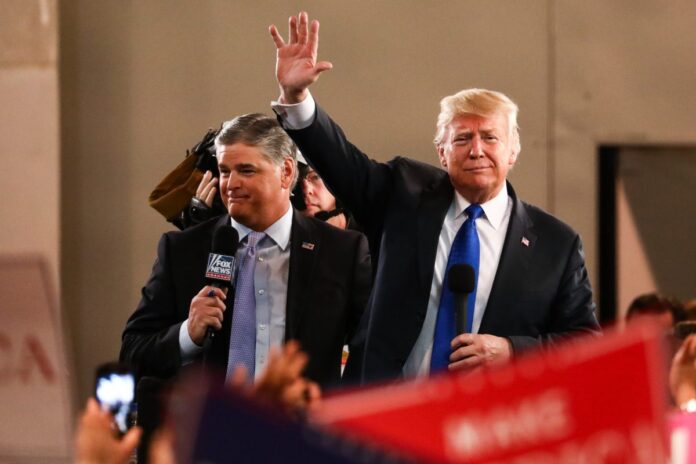 Text message exchanges that were shown during a hearing by the House select committee investigating the Capitol breach appeared to suggest that Fox News host Sean Hannity had recommended that former President Donald Trump grant Hunter Biden a presidential pardon.

In one message exchange between Hannity and McEnany, the TV host appears to update and inform McEnany about a conversation he allegedly had with Trump following the breach of the Capitol, the Daily Beast reports.

Hannity appeared to have advised the president not to associate himself with “crazy people,” to which McEnany replied, “Yes 100%.”

The TV host also tells McEnany that Trump “was intrigued by the pardon idea!! (Hunter).” According to the Daily Beast, the “Hunter” that Hannity is referring to is Hunter Biden, President Joe Biden’s son.

The Epoch Times has been unable to verify if the text message exchange was referring to Hunter Biden and has contacted Fox News for comment.

Elsewhere in the exchange of messages, Hannity also appeared to have advised the former president that there should be “no more stolen election talk,” adding, “Yes, impeachment and 25th amendment are real, and many people will quit.”

Hannity said that Trump had apparently been “resistant but listened [to] Pence (former Vice President Mike Pence) thoughts, to make it right” and that he “seemed to like attending inauguration talk.”

“Love that. Thank you. That is the playbook. I will help reinforce. Thank you for your help. You are doing a great service for your country,” McEnany replied.

Trump was first impeached on Dec. 18, 2019, for “abuse of power and obstruction of Congress.” House lawmakers alleged that Trump had abused the power of his office by pressuring Ukraine to investigate his main Democratic political rival, Joe Biden, and his son, Hunter Biden, and that the then-president obstructed justice when Democrats launched an investigation into the matter.

Trump has vehemently denied both allegations.

He was impeached a second time on Jan. 13, 2021, for “incitement of insurrection” over the Jan. 6, 2021, breach of the U.S. Capitol but again vehemently denies those claims.

While it is unclear why Trump would consider granting Hunter Biden—who is still under investigation by the Justice Department regarding his overseas business dealings—a pardon, a number of reports previously stated that Trump was considering doing so.

A 2020 article by the editor of the National Interest states that: “Trump himself might consider pardoning Hunter as well as his own family … as well as officials who worked for him.

“The difficulty for Trump has been that any such pardons would not only look self-serving, but also raise questions about trying to foreclose criminal liability since no charges have been leveled against Hunter or Ivanka or Don Jr.,” referring to Trump’s daughter and son, Ivanka Trump and Donald Trump Jr.

“These issues might not be enough to deter him, and Hunter Biden’s predicament would allow Trump to inveigh against the federal justice system more broadly. He could show magnanimity and evenhandedness by pardoning Biden’s scapegrace son.”

Trump has called the House Jan. 6 Committee hearings a “smoke and mirrors show” that distracts Americans from real current issues like sky-high inflation and supply shortages that have worsened in recent months under the Biden administration.