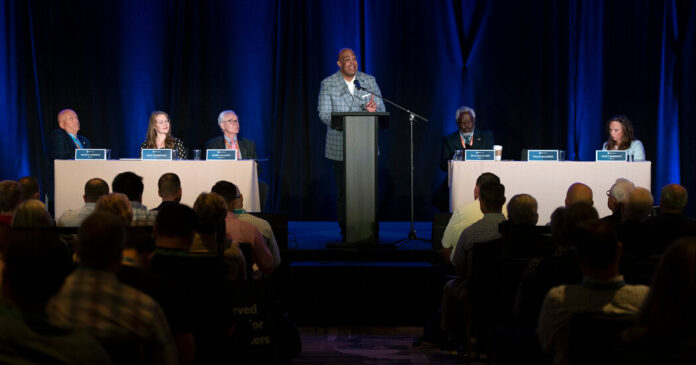 ANAHEIM, Calif. — In recent years, the Southern Baptist Convention has grappled with declining membership, high-profile departures and a sprawling sex abuse scandal. The country’s largest Protestant denominationhas also seen bitter internal clashes over race, gender and politics. This week, with all those pressures bearing down, thousands of Southern Baptists are gathering for an annual meeting that may prove to be its most consequential in decades.

The Southern California meeting comes just weeks after the release of a bombshell report alleging that leaders in the denomination suppressed reports of sexual abuse and resisted proposals for reform. Delegates will also elect a new president — a decision that will shape how the denomination will engage in national politics, and how it will handle the abuse scandal that has shaken its members.

“This has to be one of the most historic and important conventions in the history of the convention,” Jared Wellman, a pastor in Texas, said on Monday, a few hours after he was elected chairman of the convention’s executive committee, which helps direct the group’s activities and finances.

While the meeting is a momentous one for Southern Baptists, it also serves more broadly as a bellwether for conservative Christianity at a moment when the country is divided over guns, abortion and sexuality. The Supreme Court is soon expected to overturn the longstanding constitutional right to abortion.

For Southern Baptists, at stake is not just internal policy and leadership, but the fractious group’s long-term priorities and its approach to an array of increasingly contentious social issues.

Early signs looked promising for those hoping to carry out reforms in response to the report on sex abuse. Mr. Wellman, the newly elected head of the executive committee, spearheaded efforts as a member to waive attorney-client privilege in support of the third-party investigation that led to the report. The committee’s next vice president and secretary, David Sons and Pamela Reed, supported those efforts. Their challengers had opposed the move.

A separate vote on Monday for head of the Pastors’ Conference, a largely symbolic but visible role, attracted more attention than usual this year. Ultraconservatives nominated Voddie Baucham, a popular preacher and writer who warns of liberal drift on issues like critical race theory. With 608 votes, Mr. Baucham lost by 82 votes to Daniel Dickard, a pastor in North Carolina.

Turmoil in the Southern Baptist Convention

Bart Barber, a pastor in rural Texas who supports proposed sexual abuse reforms in the denomination, has lamented how “secular politics” have influenced the tone and content of debates in Southern Baptist circles. He has been endorsed by Rick Warren, the influential pastor of Saddleback Church, one of the largest congregations in the denomination, who came under fire himself from ultraconservatives when his church ordained three women as pastors last year.

Mr. Barber’s rival, Tom Ascol, is a Florida pastor who has criticized what he describes as the denomination’s leftward drift on issues including gender, sexuality, abortion and critical race theory, which the convention publicly affirmed as a potentially useful “analytical tool” in 2019. He has called for Baptists to be “culturally uncompromising.”

Mr. Ascol has condemned the sexual abuse documented in the recent report, but has warned against overly sweeping reforms that he says could compromise individual church’s autonomy and finances.

Mr. Ascol is the president of Founders Ministries, an influential organization that is part of an energized ultraconservative wing of the denomination. “We believe that God is watching, that He alone defines our terms and sets our agenda,” wrote a group of conservative Baptist leaders in nominating Mr. Ascol to the presidency in March. “And God is not Woke.”

At times, the contest for denominational leadership has taken on the tenor of a traditional political campaign. Mr. Ascol has been interviewed by right-wing outlets including One America News, Real America’s Voice and the Daily Wire.

“This is probably the most clear choice we have between the two competing directions,” said Todd Benkert, a pastor and an editor of SBC Voices, an independent website focused on the denomination. Mr. Benkert played a lead role in pushing for the abuse investigation at last year’s convention, and he supports Mr. Barber’s candidacy.

Delegates faced a similar decision at last year’s convention in Nashville, which pitted Mike Stone, an ultraconservative pastor from Georgia, against Ed Litton, a pastor from Alabama who avoided direct engagement in the culture wars. Mr. Litton won narrowly. But he announced in March that he would not seek a second one-year term.

Attendance at this year’s convention is significantly lower, in large part because a trip to Southern California is prohibitively expensive for many of the small Southern churches that are still the denomination’s center of gravity. That decline in numbers is expected to favor Mr. Barber.

With 13.7 million members, the denomination has been in a steady slump since its peak of 16.3 million members in 2006. But it still boasts 47,000 churches spread across every state, and is closely watched by a much wider sphere of conservative evangelicals.

In May, the convention released the nearly 300-page report cataloging how its leaders mishandled abuse claims, belittled victims and their families, and opposed efforts for reform. Messengers at last year’s convention commissioned the report.

Leaders had long claimed that the denomination’s decentralized structure meant it had little ability to force an individual church to take any action once abuse was discovered. In 2008, the executive committee rejected a proposal to create a database of clergy and staff “involved in sexual harassment or abuse.”

Meanwhile, a staff member compiled an informal list of people suspected of abuse, which was shared with the committee’s former vice president and general counsel, D. August Boto, the report said. Mr. Boto could not be reached for comment.

The executive committee published a 205-page version of that list in May, which its chairman, Rolland Slade, described as “an initial, but important, step towards addressing the scourge of sexual abuse and implementing reform in the Convention.” It also announced the creation of a confidential hotline for victims and others to submit allegations of abuse within the organization, which it described as a “stopgap.” The hotline is maintained by Guidepost Solutions, the company that produced the report.

On Monday evening, Mr. Ascol spoke to some 100 supporters who had gathered under towering palm trees in front of the convention center. Ethan Hardy, a seminary student, had car-pooled with two others from his church in Oregon to vote for Mr. Ascol. His concerns about the denomination included what he described as a creeping tolerance for women as pastors — which the denomination forbids — and a declining commitment in seminaries to the truth of the Bible.

Mr. Hardy wasn’t convinced his candidate would win. But it was important to him to come and be heard.

“In the Southern Baptist Convention, there is a divide,” he said. “It’s God’s will for us to be here and take a stand for righteousness.”