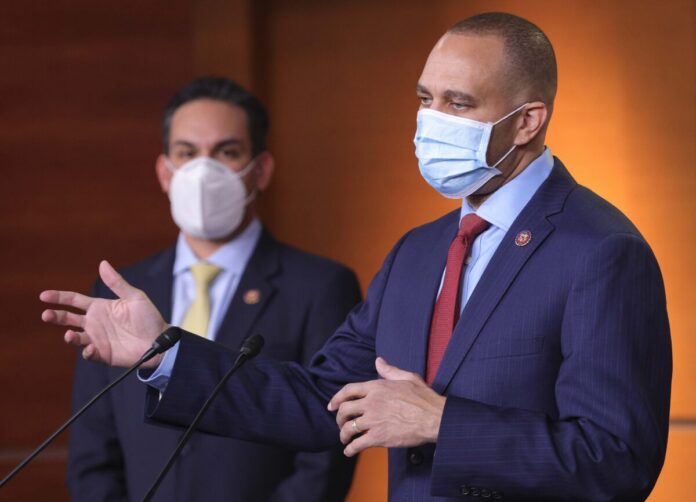 A bipartisan group of senators on June 12 announced a legislative package of gun control measures that include additional resources for mental health needs, school safety, and more.

The proposal has the support of 10 Republican senators, which is needed in the 50–50 Senate to overcome any legislative filibuster. It was praised, notably, by Senate Majority Leader Chuck Schumer (D-N.Y.), a longtime proponent of gun control measures.

The plan calls for an “enhanced review process” for younger gun buyers.

“For buyers under 21 years of age, requires an investigative period to review juvenile and mental health records, including checks with state databases and local law enforcement,” according to their statement.

The bill also will provide support for state crisis intervention, protections for domestic violence victims, funding for school-based mental health and supportive services, investment in children’s and family mental health services, clarification of the definition of a federally licensed firearms dealer, penalties for “straw purchasing” of guns, and telehealth investments.

Notably, the framework bill includes a so-called red flag provision, allowing for “resources to states and tribes to create and administer laws that help ensure deadly weapons are kept out of the hands of individuals whom a court has determined to be a significant danger to themselves or others,” according to a June 12 statement by the group.

During a press conference on June 14, Jeffries expressed the belief that the bill will have the support of an “overwhelming majority” of House Democrats.

“Many of the advocacy groups, the families affected by the violence, the people on the ground who have been working to get some progress in this area of gun violence prevention—what we know to be an epidemic—have expressed publicly their support for the agreement, at least as we understand it, as a strong, meaningful, positive step in the right direction,” Jeffries said.

However, there are some warning signals that House Democrats may be more divided on the package than Jeffries’ sanguine assessment suggests.

Rep. Alexandria Ocasio-Cortez (D-N.Y.), a prominent progressive figurehead, told a reporter on June 14 that she had several concerns about the package.

“Particularly,” Ocasio-Cortez said, “the juvenile criminalization, the expansion of background checks into juvenile records. I want to explore the implications of that and how, specifically, it’s designed and tailored.”

She continued, “After Columbine, we hired thousands of police officers into schools and while it didn’t prevent many of the mass shootings that we’ve seen now, it has increased the criminalization of teens in communities like mine.”

Asked if she was worried if the mental health aspects would increase stigmatization, Ocasio-Cortez said: “Absolutely. Because what people are blaming on mental health are really deeper issues of violent misogyny and white supremacy. And while there are mental health issues attenuated like the deep isolation that we see with a lot of these folks, at the end of the day, we’re not addressing—there are some issues like the boyfriend loophole being closed.”

These concerns, if more widespread among progressives, could make final passage of the bill in the House difficult.

In the Senate, at least, the bill—as it stands—seems on track to pass.

Earlier on June 14, Sen. Joe Manchin (D-W.Va.), a critical swing vote, came out in support of the legislative package.

“We have to do something. And gun owners are standing up. You take polls around the country, in my state, too—law-abiding gun owners want something to be done,” Manchin said. “They don’t want people who should never have a gun, or [are] mentally incapacitated or not stable, to be able to access anything they want.”

The principles underlying the package, primarily prevention and intervention, are “something that’s sensible and reasonable,” Manchin said.

“We have got to take what we have got as a positive and work off of this. But this should not … this piece of legislation, as drafted, should not be threatening to any law-abiding citizen in the United States of America, not one. And no law-abiding gun owner should be offended by this,” Machin continued. “We take no rights away, no privileges away. We don’t basically threaten you’re going to lose anything at all.”