Lawmaker’s Capitol Complex Tour on the Eve of Jan. 6 Was Innocent, Police Say 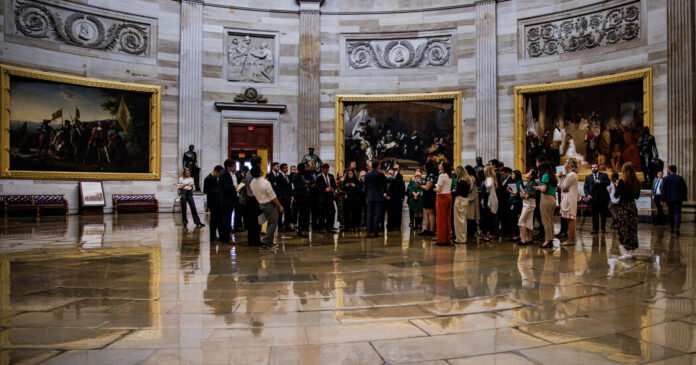 WASHINGTON — A tour of parts of the Capitol complex given by a Republican lawmaker the day before the Jan. 6 riot appears to have been innocuous, the Capitol Police said on Monday, describing a visit that had attracted scrutiny from the House committee examining the attack as simply a meeting with constituents.

“We train our officers on being alert for people conducting surveillance or reconnaissance, and we do not consider any of the activities we observed to be suspicious,” J. Thomas Manger, the chief of the Capitol Police, wrote in a letter about the tour, which was conducted by Representative Barry Loudermilk of Georgia.

Leaders of the House committee had asked Mr. Loudermilk last month to submit to questioning about the tour, saying they were looking into whether rioters had conducted reconnaissance of the building before the rampage.

They did not directly assert that anyone escorted by Mr. Loudermilk had later attacked the Capitol. But they suggested that they had obtained evidence that he had led visitors around the complex, and wrote that their review of evidence “directly contradicts” Republicans’ denials that closed-circuit security camera footage showed no such tours had taken place.

His letter described the tour as a “visit by constituents” and noted that the group did not enter the Capitol building or its tunnel system.

“There is no evidence that Representative Loudermilk entered the U.S. Capitol with his group on Jan. 5, 2021,” Chief Manger wrote.

Tours of the Capitol were limited at the time because of pandemic restrictions.

Mr. Loudermilk’s office on Monday released Chief Manger’s letter, which was sent to Representative Rodney Davis of Illinois, the top Republican on the Administration Committee.

A spokesman for the House committee did not immediately respond to a request for comment.

In a statement last month, Mr. Loudermilk conceded that he had brought the constituents into parts of the Capitol complex — though not the Capitol itself — the day before the riot, but he said that the visit was harmless.

“A constituent family with young children meeting with their member of Congress in the House office buildings is not a suspicious group or ‘reconnaissance tour,’” Mr. Loudermilk wrote in a joint statement with Mr. Davis, adding: “No place that the family went on the 5th was breached on the 6th, the family did not enter the Capitol grounds on the 6th, and no one in that family has been investigated or charged in connection to Jan. 6.”

Mr. Loudermilk has declined to meet with the panel to discuss the matter.

To date, not one of seven Republican lawmakers the committee has asked to meet with has agreed to so. The committee has issued subpoenas to five of them, including Representative Kevin McCarthy of California, the minority leader, to try to force their cooperation.

On Monday, the panel completed its second public hearing this month, in which it made a wide-ranging case that former President Donald J. Trump created and relentlessly spread the lie that the 2020 election had been stolen from him, in the face of mounting evidence from a chorus of advisers that he had been legitimately defeated.

A pro-Trump crowd of thousands, believing those lies, attacked the Capitol as Congress was meeting to certify the election of Joseph R. Biden Jr., on Jan. 6, injuring more than 150 police officers and causing widespread damage.

Immediately after the riot, Democrats raised questions about whether some Republican members of Congress had defied pandemic restrictions and given tours of the Capitol before the attack, allowing visitors to study the layout of the complex before the violent rampage.

More than 30 Democrats joined Representative Mikie Sherrill of New Jersey in requesting an investigation by the top Capitol security officials and the Capitol Police into what Ms. Sherrill called “suspicious behavior” and access given to visitors to the Capitol complex the day before the riot.

Ms. Sherrill said she knew of members of Congress who had given “reconnaissance” tours ahead of the attack.

The Capitol Police said at the time that they were investigating the matter.

One lawmaker, Representative Lauren Boebert, a freshman Colorado Republican whom one Democrat accused of giving a tour, said in a statement that she had “never given a tour of the U.S. Capitol to anyone besides family members in town for my swearing-in.” She called the charge an “irresponsible lie.”

Mr. Loudermilk also denounced the accusations and joined an ethics complaint against the Democrats who made them.