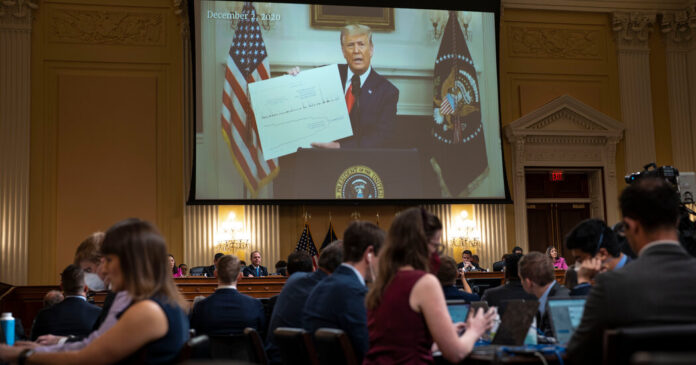 WASHINGTON — The House committee investigating the Jan. 6, 2021, attack on the Capitol made a wide-ranging case on Monday that former President Donald J. Trump created and relentlessly spread the lie that the 2020 election had been stolen from him in the face of mounting evidence from an expanding chorus of advisers that he had been legitimately defeated.

The committee, in its second hearing this month, traced the origins and progression of what it has described as Mr. Trump’s “big lie.” It showed through live witness testimony and recorded depositions how the former president, defying many of his advisers, insisted on declaring victory on election night before the votes were fully counted, then sought to challenge his defeat with increasingly outlandish and baseless claims that he was repeatedly informed were wrong.

“He’s become detached from reality if he really believes this stuff,” William P. Barr, the former attorney general, said of Mr. Trump during a videotaped interview the panel played on Monday, in which he at one point could not control his laughter at the absurdity of the claims that the former president was making.

“There was never an indication of interest in what the actual facts were,” Mr. Barr said.

The panel also used the testimony of Bill Stepien, Mr. Trump’s campaign chief, who told its investigators that Mr. Trump had ignored his election-night warning to refrain from declaring a victory that he had no basis for claiming. Instead, the president took the advice of Rudolph W. Giuliani — his personal lawyer who was, according to Jason Miller, a top campaign aide, “definitely intoxicated” — and said he had won even as the votes were still being tabulated.

It was all part of the committee’s bid to show how Mr. Trump’s dissembling about the election results led directly to the events of Jan. 6, when a mob of his supporters stormed the Capitol in the deadliest attack on the building in centuries, spurred on by the president’s exhortations to “stop the steal.”

Investigators went further on Monday, detailing how the Trump campaign and its Republican allies used claims of a rigged election that they knew were false to mislead small donors and raise as much as $250 million for an entity they called the Official Election Defense Fund, which top campaign aides testified never existed.

“Not only was there the big lie,” said Representative Zoe Lofgren, a California Democrat who played a key role in the hearing, “there was the big rip off.”

Money ostensibly raised to “stop the steal” instead went to Mr. Trump and his allies, including, the investigation found, $1 million for a charitable foundation run by Mark Meadows, his chief of staff; $1 million to a political group run by several of his former staff members, including Stephen Miller, the architect of Mr. Trump’s immigration agenda; more than $200,000 to Trump hotels; and $5 million to Event Strategies Inc., which ran the Jan. 6 rally that preceded the Capitol riot.

Aides said Kimberly Guilfoyle, the girlfriend of Mr. Trump’s son Donald Trump Jr., was paid $60,000 to speak at that event, a speech that lasted less than three minutes.

“It is clear that he intentionally misled his donors, asked them to donate to a fund that didn’t exist and used the money raised for something other than what he said,” Ms. Lofgren said of Mr. Trump.

But the bulk of the session was dedicated to showing how determined Mr. Trump was to cling to the fiction that he had won the election, only digging in more deeply as aide after aide informed him that he had not.

The list of aides and advisers who sought to steer Mr. Trump away from his false claims was long and varied, according to the committee’s presentation. They included low-level campaign lawyers who outlined how they told the president that the returns coming in from the field showed that he was going to lose the race. Also among them were top officials in the Justice Department — including his onetime attorney general — who walked through how they had investigated claims that the race had been rigged or stolen and found them not only to be unsubstantiated, but to be nonsensical.

“There were suggestions by, I believe it was Mayor Giuliani, to go and declare victory and say that we’d won it outright,” Mr. Miller said in a video interview played by the panel.

Mr. Stepien later said he considered himself part of “Team Normal,” while a separate group of outside advisers including Mr. Giuliani were encouraging Mr. Trump’s bogus claims.

The committee played several portions of a deposition by Mr. Barr, Mr. Trump’s last attorney general, who called the president’s claims of a stolen election “bullshit” and “bogus.”

“I told them that it was crazy stuff and they were wasting their time,” Mr. Barr testified. “And it was a great, great disservice for the country.”

Mr. Trump was still at it on Monday, issuing a rambling 12-page statement several hours after the committee hearing ended in which he doubled down on his claims of fraud, complaining — yet again without any evidence — that Democrats had inflated voter rolls, illegally harvested ballots, removed Republican poll watchers from vote-counting facilities, bribed election officials and stopped the counting on election night when he was still in the lead.

“Democrats created the narrative of Jan. 6 to detract from the much larger and more important truth that the 2020 Election was rigged and stolen,” Mr. Trump wrote.

In the hearing room on Monday, the panel showed in striking detail how Mr. Trump’s advisers tried and failed to get him to drop his lies and accept defeat. In his deposition, Mr. Barr recalled several scenes inside the White House, including one in which he said he asked Mr. Meadows and Jared Kushner, the president’s son-in-law and top adviser, how long Mr. Trump intended “to go on with this stolen election stuff.”

Mr. Barr recalled that Mr. Meadows had assured him that Mr. Trump was “becoming more realistic” and knew “how far he can take this.” As for Mr. Kushner, Mr. Barr recounted that he responded to the question by saying, “We’re working on this.”

After informing Mr. Trump that his claims of fraud were false, Mr. Barr had a follow-up meeting with the president and his White House counsel, Pat Cipollone. Mr. Barr described in his deposition how Mr. Trump became enraged that his own attorney general had refused to back his fraud allegations.

“This is killing me,” Mr. Barr quoted Mr. Trump as saying. “You must have said this because you hate Trump.”

Altogether, Mr. Trump and his allies filed more than 60 lawsuits challenging the results of the election. But among the numerous claims of fraud, Mr. Barr told the committee, the worst — and most sensational — concerned a purported plot by Chinese software companies, Venezuelan officials and the liberal financier George Soros to hack into machines manufactured by Dominion Voting Systems and flip votes away from Mr. Trump.

These allegations were most prominently pushed by a former federal prosecutor named Sidney Powell, who collected several unvetted affidavits from witnesses who supposedly had information about Dominion. In the weeks after the election, Ms. Powell, working with a group of other lawyers, filed four federal lawsuits laying out her claims in the Democratic strongholds of Atlanta, Detroit, Milwaukee and Phoenix even though the Trump campaign had already determined that some of her allegations were false.

All of the suits — known as the “Krakens,” a reference to a mythical, havoc-wreaking sea beast — were eventually dismissed and deemed to be so frivolous that a federal judge sanctioned Ms. Powell and her colleagues. Dominion has sued her and others for defamation.

Mr. Barr, in his deposition, described the claims against Dominion as “crazy stuff” — a sentiment that was echoed by other Trump aides whose testimony was presented by the committee.

After Mr. Barr left his position as attorney general, his successor, Jeffrey A. Rosen, also told Mr. Trump his claims of widespread fraud were “debunked.”

Another witness who testified on Monday and dismissed Mr. Trump’s claims of fraud was Byung J. Pak, the former U.S. attorney in Atlanta who abruptly resigned on Jan. 4, 2021. After speaking with Mr. Barr, Mr. Pak looked into allegations of election fraud in Atlanta, including a claim pushed by Mr. Giuliani that a suitcase of ballots had been pulled from under a table in a local counting station on election night.

Mr. Trump and his allies also claimed that there was rampant fraud in Philadelphia, with the former president recently asserting that more people voted in the city than there were registered voters. In his deposition, Mr. Barr called this allegation “rubbish.” To bolster this argument, the committee called Al Schmidt, a Republican who served as one of three city commissioners on the Philadelphia County Board of Elections.

Mr. Schmidt rejected the fraud claims raised by Mr. Trump and his allies, saying there was no evidence that more people voted in Philadelphia than were registered there or that thousands of dead people voted in the city.

Mr. Schmidt also testified that after Mr. Trump posted a tweet accusing of him by name of committing election fraud, he received threats online from people who publicized the names of his family members, his address and photographs of his home.