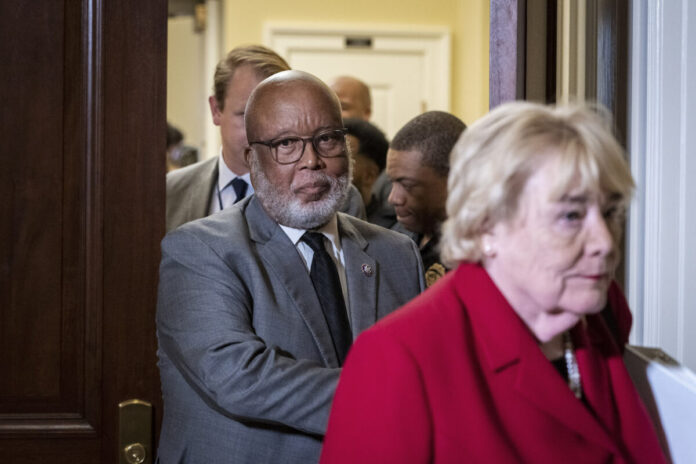 Rep. Bennie Thompson (D-Miss.), the chairman of the Jan. 6 Committee, said that making criminal referrals is not why the panel has been doing its investigations.

As he was leaving the House chamber after the second day of the committee’s public hearings, Thompson was asked by a reporter whether he believed that former President Donald Trump had committed any crime and whether he would want the Justice Department to investigate or indict Trump.

“Well, I’d prefer that we’d complete our work, and share that work with the Department of Justice, and they will make that call after that,” Thompson responded.

“But you’ve got to give evidence to show that he committed a crime?” the reporter pressed, referring to Trump.

“That’s not why we’re working. We’re looking for the facts and the circumstances that brought about Jan. 6,” Thompson said, before walking away from reporters.

Later, in a statement on Twitter, the committee’s vice-chair, Liz Cheney (R-Wyo.), said the committee “has not issued a conclusion regarding potential criminal referrals.”

“We will announce a decision on that at an appropriate time,” Cheney said.

Rep. Elaine Luria (D-Va.), one of the seven Democrats on the nine-member committee, said on Twitter that the committee “has yet to vote on whether we will recommend criminal referrals to the Department of Justice.”

But she added, “If criminal activity occurred, it is our responsibility to report that activity to the DOJ.”

A Jan. 6 Committee spokesperson told CNN that the panel “has no authority to prosecute individuals, but is rather tasked with developing the facts surrounding the January 6th riot at the Capitol.”

“Right now, the committee is focused on presenting our findings to the American people in our hearings and in our report,” the spokesperson told the outlet. “Our investigation is ongoing and we will continue to gather all relevant information as we present facts, offer recommendations and, if warranted, make criminal referrals.”

At least two members on the panel have said they believe there is cause to investigate Trump.

“I would like to see the Justice Department investigate any credible allegation of criminal activity on the part of Donald Trump or anyone else,” Rep. Adam Schiff (D-Calif.) recently told ABC News’ “This Week.”

“The rule of law needs to apply equally to everyone. And there are certain actions, parts of these different lines of effort to overturn the election, that I don’t see evidence the Justice Department is investigating,” Schiff said.

“Once the evidence is accumulated by the Justice Department, it needs to make a decision about whether it can prove to a jury beyond a reasonable doubt the President’s guilt or anyone else’s, but they need to be investigated if there’s credible evidence, which I think there is.”

Rep. Jamie Raskin (D-Md.) told CNN that it has outlined in legal pleadings the criminal statutes that the panel believes have been violated. He also claimed that the panel has evidence that Trump “knew” Joe Biden won the 2020 election.

“I think we can prove to any reasonable, open-minded person that Donald Trump absolutely knew because he was surrounded by lawyers,” Raskin said on CNN’s “State of the Union.” “He continues to spread it to this very day. He continues to foist that propaganda on his followers.”

The committee has been criticized by many Republicans for partisanship, in part, because its only two Republican members—Rep. Adam Kinzinger (R-Ill.) and Cheney—are both known for their strong opposition to Trump.

The committee on June 9 held the first of a series of nine scheduled primetime hearings over the next few weeks. It hasn’t held a hearing with witnesses since July 2021.

During the first hearing, the committee alleged that Trump was a major catalyst behind the events of Jan. 6, 2021. During the second hearing on Monday, the panel brought forth witness testimony that opposed Trump’s allegations of widespread voter fraud and irregularities in the 2020 election.

Trump on Monday issued a 12-page statement (pdf) in which he called the Jan. 6 committee’s efforts a “sham investigation” and a “Kangaroo Court.”

“They have refused to allow their political opponents to participate in this process, and have excluded all exculpatory witnesses, and anyone who so easily points out the flaws in their story,” he said, while reasserting the claims alleging election fraud and irregularities, and calling for officials in public office to properly investigate the evidence.

“Democrats created the narrative of January 6th to detract from the much larger and more important truth that the 2020 Election was Rigged and Stolen,” Trump alleged.

“The truth is that Americans showed up in Washington, D.C., in massive numbers (but seldom revealed by the press), on January 6th, 2021, to hold their elected officials accountable for the obvious signs of criminal activity throughout the Election.

“Since the Unselect Committee refuses to allow their political opponents to participate in the hearings, the public likely won’t hear from the many patriots who contradict the lies being broadcast—at least not in these hearings,” he added. “This is all a ridiculous and treasonous attempt to cover up the fact that Democrats rigged the Election and are siphoning Americans’ freedoms and power for their own benefit.”