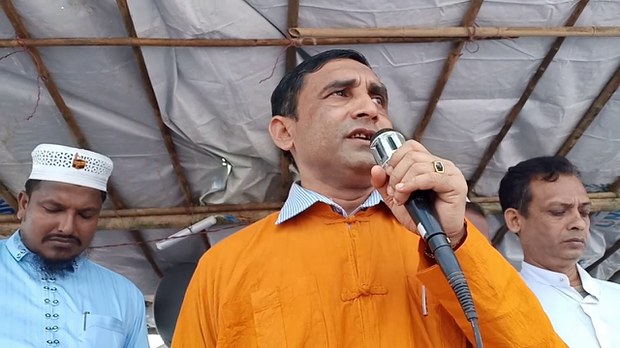 The leader of the Arakan Rohingya Salvation Army rebel group ordered the killing of Rohingya activist Muhib Ullah at a Bangladeshi refugee camp last year, police in the South Asian country said in recommending murder charges against 29 suspects, although the insurgent group denied being involved.

Muhib Ullah was more popular than Ataullah Abu Ahmmar Jununi, the head of ARSA, and that displeased him, according to an investigation report that police submitted to a court in Cox’s Bazar district on Monday.

Seen by BenarNews, the police report says the 29 suspects were members of ARSA and that they acted at the orders of Ataullah and were involved in Muhib Ullah’s murder at various stages.

Fifteen of the 29 suspects have been arrested since the killing last September and the remaining 14 are absconding, police said.

The report says that four of the 15 persons confessed to their involvement in Muhib Ullah’s murder. According to one of them, ARSA leaders organized a meeting at one of the refugee camps two days before the murder, the police report says.

“At the meeting, [one suspect] and others said ‘our leader Ataullah Jununi told us that Muhib Ullah is emerging as a bigger leader. The Rohingya are giving him more support. He must be killed’ said accused Azizul Haque who was guarding the meeting venue,” according to a portion of the police report.

“All of the persons having involvement with the murder are the members of the so called ARSA/Al-Yaaqin,” reads the report, adding that the accused persons had reportedly been involved in theft, robbery, murder, rape, mugging, human trafficking and smuggling of illegal narcotics.

“All of them are rogues,” says the report, stating that ARSA and Al-Yaaqin were the same organization.

This is the first official admission by Bangladeshi authorities on the presence of ARSA at the refugee camps. Until now, the Bangladesh government has strenuously denied that ARSA exists on Bangladesh soil.

Mohammad Rafiqul Islam, an additional superintendent of police in Cox’s Bazar district, confirmed to BenarNews that police submitted the investigation report to the local court on Monday, but he declined to comment further.

On the night of Sept. 29, 2021, unidentified gunman burst in and fatally shot Muhib Ullah, a refugee and internationally known Rohingya activist, in his office at the Kutupalong camp while he was meeting with other refugees.

ARSA is a Rohingya insurgent group whose 2017 attack on government outposts in Myanmar’s Rakhine state led to a brutal military crackdown against the stateless Rohingya Muslim minority, causing about 740,000 of them to flee to neighboring Bangladesh.

ARSA is also blamed for criminal activities at the Rohingya camps in Ukhia and Teknaf, two sub-districts of Cox’s Bazar, a southeastern district near the border with Rakhine state in Myanmar.

The police report says that ARSA was against the repatriation of the Rohingya to Myanmar but it did not elaborate on the reason.

“Ataullah Abu Ahmmar Jununi could not accept the leadership of Muhib Ullah. He asked Muhib Ullah to stop the operation of his organization to promote the repatriation of the Rohingya. But he did not listen,” the report says.

Without going into detail, the report also says that the popularity of the Arakan Rohingya Society for Peace and Human Rights, Muhib Ullah’s organization, would stand in the way of ARSA’s operations.

In addition, according to the report, Ataullah asked Muhib Ullah to join ARSA but he rejected the offer.

Sunil Barua in Cox’s Bazar, Bangladesh, contributed to this report.