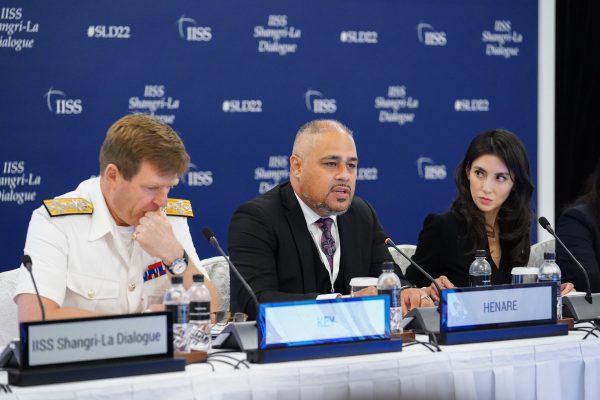 New Zealand’s defense minister, Peeni Henare, has had a very busy first half of the year.

In January, Henare was the face of New Zealand’s relief effort to Tonga, following the eruption of the Hunga Tonga–Hunga Ha’apai volcano.

Then, from March onwards, Henare was often involved in Prime Minister Jacinda Ardern’s announcements of military support for Ukraine. The Government initially decided to supply only defensive (or “non-lethal”) equipment to Kyiv, which took the form of body armor, helmets, and vests. Cabinet initially declined a request by Henare for New Zealand to also supply “lethal aid” weaponry to Ukraine – but that decision was suddenly reversed in early April.

Since Russia’s invasion of Ukraine on February 24, tensions between China and the West have also escalated in the Indo-Pacific. The increased focus on “hard security” in New Zealand’s neighborhood has only strengthened Henare’s role further.

The defense minister’s first trip outside New Zealand was to Fiji in late March. The outcome was a “Statement of Intent” pledging stronger defense ties between Suva and Wellington. A week later, New Zealand Foreign Minister Nanaia Mahuta herself travelled to Fiji to sign a broader “Duavata Partnership,” which promised “a new level of expanded strategic cooperation” between Suva and Wellington.

Given the subsequent debate over China’s interest in its own security arrangements with Pacific countries – especially Solomon Islands – a section of the Duavata Partnership that promises greater cooperation between Fiji and New Zealand on cybersecurity, defense, and policing seems particularly significant.

The Pacific remains the focus during Henare’s current trip to Asia.

On Saturday, Henare spoke on a panel on “Climate Security and Green Defense” at the Shangri-La Dialogue in Singapore. Of course, in the current geopolitical climate, nothing is ever as it seems – and Henare’s contribution mainly served as just another opportunity to stress the strategic importance of the Pacific region and justify New Zealand’s involvement.

If this needed to be underlined, Henare obliged with his opening remarks at the defense ministers’ summit, which included the line “our security and well-being are intrinsically bound to the peace and stability of our region.”

With his first in-person multilateral meeting under his belt, Henare now heads to Seoul for a three-day bilateral visit.

Much like Ardern’s decision to brand her recent overseas trips as “trade missions,” the official reasoning given for Henare’s visit to South Korea probably understates its significance.

The government says the main reason for Henare’s trip is to check on New Zealand troops deployed there and to acknowledge the contribution of the 6,000 New Zealand soldiers who served in the Korean War. This is, of course, an important and worthy reason for a visit – but it is far from the only one.

2022 marks the 60th anniversary of diplomatic ties between Wellington and Seoul – and bilateral relations may be about to step up a gear.

South Korea is New Zealand’s fifth-biggest export market, putting it behind only China, Australia, the United States, and Japan in importance. This statistic alone makes it overdue for a visit by a senior New Zealand minister.

But there is more to it than that. Like New Zealand, South Korea is currently edging its foreign policy toward the West. This is despite the fact that China is South Korea’s biggest export market and two-way trading partner – another parallel with New Zealand, which sends 33 percent of its exports to China.

Seoul has also had another very particular reason to keep on good terms with China – the influence Beijing holds over unpredictable Pyongyang. Already this year, North Korea has undertaken a record-breaking number of missile tests – 31 in total – and appears to be more dangerous than ever.

Despite this, South Korea’s new President Yoon Suk Yeol is seeking to broaden his country’s foreign policy ambitions beyond the Korean Peninsula, in a bid to become what he calls a “global pivotal state.”

Yoon, a conservative, narrowly won power in South Korea’s presidential election held in March. But there were signs of changes even in the last days of the five-year term of Yoon’s more liberal predecessor, Moon Jae-in.

When Russia invaded Ukraine in February, Moon initially tried to avoid placing South Korea’s own sanctions on Russia – a stance also initially taken by New Zealand – before giving into pressure and joining the sanctions club a few days later.

The decision made South Korea one of only a handful of Asian economies to impose sanctions on Russia. Two of the others are Singapore and Japan, which Ardern herself visited at the end of April.

The shift on sanctions made by Moon – who visited New Zealand in late 2018 – closely echoed New Zealand’s own new calculations. Ardern was initially reluctant to impose sanctions to avoid setting a precedent that could irritate China. But as she faced pressure domestically and from Western partners, Ardern soon changed course and introduced the groundbreaking Russia Sanctions Act.

The similarities do not stop there.

Last month, Yoon hosted U.S. President Joe Biden in Seoul and the pair issued a joint statement that cited several sensitive China-related issues – such as the South China Sea and the Taiwan Strait – as well as the North Korea threat.

Unlike New Zealand, South Korea is a staunch U.S. ally, so it might seem remarkable that New Zealand’s own recent joint statement with the United States – issued after Ardern met Biden in the White House – is even more hawkish and detailed when it comes to criticism of China.

This is a risk. Beijing has already verbally expressed disapproval at New Zealand’s apparent alignment with the U.S., and more substantive repercussions may yet emerge.

But for now, New Zealand and South Korea are forging broadly similar foreign policy paths that see them working more closely with other Western partners.

Neither country is a member of the Quad grouping of China hawks – an arrangement involving Australia, India, Japan, and the U.S. – but both New Zealand and South Korea (along with Vietnam) have been part of a trialed “Quad Plus” format that could always be revived and expanded.

Moreover, both New Zealand and South Korea are among just four countries from the Indo-Pacific – the others are Australia and Japan – to be invited to attend the North Atlantic Treaty Organization (NATO) leaders’ summit in Spain at the end of June. Ardern has yet to officially confirm her attendance at the Madrid meeting, but Mahuta already attended a NATO foreign ministers’ meeting virtually in April. NATO is obviously keen to bring New Zealand and South Korea – which it calls Asia-Pacific partners – more closely into its orbit.

Both Seoul and Wellington have also been keen to sign up to a new economic pillar that the United States is setting up to counter Chinese influence. The Indo-Pacific Economic Framework (IPEF) is still somewhat nebulous when it comes to detail.

But Wendy Cutler, a former U.S. diplomat and trade negotiator, suggests the IPEF’s “supply chain resilience” component might be drawn on to counter a Chinese strategy that the United States calls “economic coercion.” The coercion label essentially refers to Beijing’s imposition of trade punishments on countries that get offside with its wider foreign policy aims.

Australia experienced the impact of trade linkage when China imposed punitive tariffs on Australian wine and barley exports in 2020, after then-Prime Minister Scott Morrison called for an investigation into the origins of COVID-19.

Henare’s three-day mission to South Korea is no accident. Seoul and Wellington might be 10,000 kilometers apart, but when it comes to geopolitical strategy, New Zealand and South Korea are becoming closer by the day.

This article was originally published by the Democracy Project, which aims to enhance New Zealand democracy and public life by promoting critical thinking, analysis, debate, and engagement on politics and society.