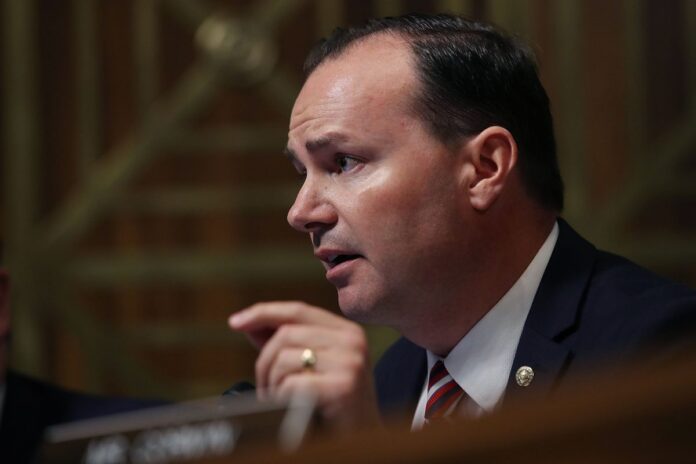 “Wasteful government spending has stoked an inflation rate that is now costing Utahns a staggering $800 each month,” the Utah lawmaker told said in a statement on June 12. “Inflation remains historically high under President [Joe] Biden and it’s making life less affordable for families across the nation.”

The Republican lawmaker touted his own plan to fight inflation, which he said “addresses the harmful policies that got us here.”

Lee introduced three bills in April aimed at curbing soaring inflation: the Price Act, which requires a three-fifths majority of senators to approve new spending measures when the national inflation rate is at or above 3 percent; the Ship It Act, which aims to help ease the nation’s supply chain crisis and counter rising inflation by simplifying or suspending certain federal regulations on ports, ships, and trucks; and the Houses Act, which seeks to help local governments address housing supply and affordability issues.

The lawmaker is a ranking member of the bipartisan Joint Economic Committee (JEC), which was established by the Employment Act of 1946 and continuously studies matters relating to the U.S. economy.

According to the tracker, the states of Colorado, Utah, and Minnesota are paying the most for everyday essentials like groceries and gas compared to the rest of the nation.

In Colorado, households are facing 13.5 percent increased inflation and were spending an extra $825 in May, or $9,895 per year, to purchase the same items they bought back in January 2021.

Utah households are also spending an extra $800 per month, or $9,603 per year, according to the tracker, while in Minnesota, those costs rose to $747 for the month of May.

Biden has declared that fighting inflation is his top economic priority, while also blaming rising prices on Russian President Vladimir Putin’s invasion of Ukraine as well as supply chain issues.

The federal deficit has increased by $3.4 trillion since Biden took office, in part owing to costly pandemic-related emergency programs like the $1.9 trillion American Rescue Plan Act in March 2021 and the $1.5 trillion Omnibus Spending Act in March 2022.

Meanwhile, U.S. annual inflation surged to 8.6 percent in May, beating the market estimate of 8.3 percent and leaving Americans to fork out more on essential items.

Republican lawmakers have pointed to a number of Biden’s policies, such as canceling the Keystone XL pipeline and suspending new oil drilling on federal lands, which they say have further exacerbated energy prices.

However, Rep. Don Beyer (D-Va.), Lee’s counterpart on the JEC, in a statement on June 10 praised the Biden administration for “increasing the oil supply and working with the [Federal Trade Commission] to boost competition in oil markets to bring down gas prices,” while noting that congressional Democrats are “working to combat price gouging to ensure greedy companies aren’t lining their pockets while U.S. drivers foot the bill.”

Beyer said that Democrats are working to bring down costs for American households on the most expensive items such as child care, health care, and housing, adding that, “Republicans have proposed nothing, and they have blocked or voted against everything Democrats have put forth.”

“That is sabotage, not good governance,” Beyer said.