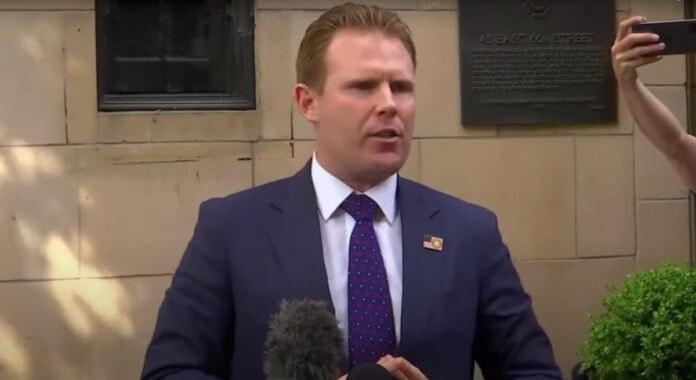 New York gubernatorial candidate Andrew Giuliani confirmed he was banned from attending an in-person debate on Monday against his Republican opponents because he won’t provide proof of COVID-19 vaccination.

Giuliani, the son of former New York Mayor Rudy Giuliani, announced he was running for New York governor last year. He worked in the Trump administration as a public liaison to former President Donald Trump as his father represented Trump as his personal attorney.

During a press conference streamed on Sunday, Giuliani said he has to participate in the debate remotely, saying that WCBS-TV told him that he would need to provide proof of a negative test. Later, he added, the network wanted him to provide proof of vaccination.

“I told them I would not do that,” he said. “I don’t think that’s something that even someone who has chosen to get the shot should have to do, from a constitutional standpoint.”

WCBS-TV told The Associated Press that anyone who enters its facility has to show proof of COVID-19 vaccination.

“Any candidate who doesn’t meet this requirement is encouraged to participate in Monday’s debate remotely,” the company told the wire service over the past weekend.

The younger Giuliani said he wrote a letter to CBS executives criticizing the station’s move to block him from attending the debate.

“While [your rules] will disrupt Monday’s debate, the true injustice is that policies such as these have deprived front-line heroes such as firefighters, police, and healthcare workers of employment and benefits,” he said via his campaign.

Giuliani has criticized New York City’s vaccine mandates in the past and said that if he’s elected, he will restore the jobs of government workers who were fired for not getting the COVID-19 shot.

During his news conference, Guiliani said he has chosen not to get the vaccine for several reasons, including that federal health officials have said the COVID-19 vaccine “doesn’t actually stop transmission.”

“I chose very clearly that I was not going to get the shot,” Giuliani said Sunday. “I wish I had the opportunity to be in studio.”

Winners of the Republican primary will face off against Gov. Kathy Hochul, who is the front-running Democrat candidate. Hochul took office last year following former Gov. Andrew Cuomo’s resignation after a series of highly publicized scandals.

The GOP and Democrat primaries will be held on June 28, and voting starts on June 18. The last Republican governor of New York was George Pataki, who departed in 2006, and since then, it’s an office that has been dominated by Democrats.