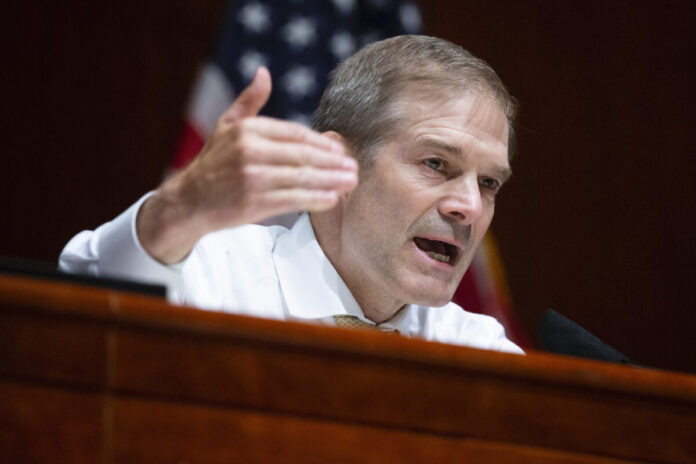 “We also know that this committee has altered evidence and lied to the American people about it, so much so that they had to issue a statement which says, ‘We regret the error,’ which is government-speak for, ‘We got caught lying,’” Jordan told Fox News on Monday. “So, that’s what this committee is about. I think the country sees it for what it is—a partisan, political activity.”

The GOP lawmaker was referring to the Jan. 6 committee having acknowledged in December 2021 that it doctored a text message between Jordan and Meadows and also excluded content about how they had wanted former Vice President Mike Pence to handle electoral votes during the Joint Session of Congress on Jan. 6.

Late last year, Rep. Adam Schiff (D-Calif.), the head of the House Intelligence Committee, showed an image during a hearing about communications between Meadows and others, including Jordan. It was displayed as the House committee was discussing whether to hold Meadows in contempt of Congress.

The message was presented as follows, “On January 6, 2021, Vice President Mike Pence, as President of the Senate, should call out all electoral votes that he believes are unconstitutional as no electoral votes at all.”

Schiff at the time described the message as an attempt by Jordan to suggest that “the former vice president simply throw out votes that he unilaterally deems unconstitutional.”

However, it turned out the text message was a direct quote from Department of Defense Inspector General Joseph Schmitz, according to The Federalist, and not from Jordan himself. The message was also edited to cut off the rest of the sentence, which read in full: “… in accordance with guidance from founding father Alexander Hamilton and judicial precedence.”

A spokesman for the House Jan. 6 committed told The Epoch Times in December that the message was doctored.

On Monday, Jordan, who is the ranking Republican on the House Judiciary Committee, told Fox that last Thursday’s televised hearings on the Jan. 6 committee’s findings presented no new information.

“I still don’t think there was anything new there,” Jordan remarked. “It’s kind of like the home team playing at home, and the ref’s on their side and they still can’t win the game.”

Panel members last week and on Monday claimed that former President Donald Trump orchestrated a scheme to overturn the election and suggested that he directed protesters to the U.S. Capitol on Jan. 6.

“Jan. 6 was the culmination of an attempted coup,” said Rep. Bennie Thompson (D-Miss.), chairman of the committee, during the broadcast last week.  “A brazen attempt … to overthrow the government. Violence was no accident.”

The House committee, which consists of seven Democrats and two Republicans, held another hearing Monday. Another one is scheduled for Wednesday.