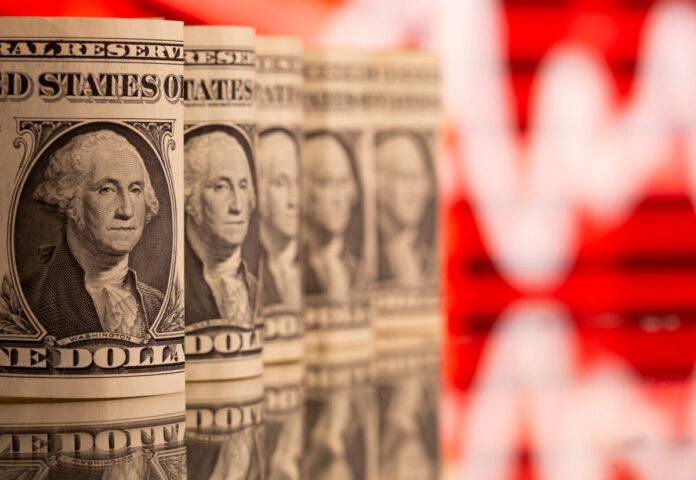 A recessionary red flag was raised on Monday when the yield curve inverted on the bellwether 2-year/10-year U.S. Treasury spread on expectations that the Federal Reserve might tighten monetary policy faster and further in a bid to tame soaring inflation.

The U.S. 2-year Treasury yields climbed above 10-year borrowing costs on June 13 for the first time since a brief inversion in April, with the gap falling to as low as minus 0.02 percentage points, Tradeweb prices showed.

The closely-watched spread between the 2-year and 10-year Treasury yield is viewed by many analysts as one of the most reliable recession red flags.

The last time this bellwether yield curve inverted was in early April, when it quickly recovered. Prior to that, it inverted in 2019, before pandemic lockdowns the following year sent the economy into a recessionary spiral.

After the April inversion on the 2-year/10-year Treasury yield spread, Morgan Stanley strategists predicted it would once again invert and likely sustain that inversion for the rest of 2022. While they noted that, historically, such an inversion has signaled an “imminent” recession, they predicted that this time around it could be different.

“Overall, the yield curve has become less of a recession indicator over the last two economic cycles,” Morgan Stanley U.S. Chief Economist Ellen Zentner said in a statement at the time.

“And when we look at factors in the economy that are typically signals of a recession, such as job growth, retail sales, real disposable income and industrial production, we don’t see an approaching recession,” Zentner added.

That picture hasn’t shifted much since April, as the near-term outlook for U.S. economic growth “remains in decent shape,” according to a recent note from ING analysts. But last week’s unexpectedly high inflation data has boosted expectations that the Fed would move faster and further with rate hikes, raising the risk that aggressive tightening could tip the economy into a recession.

Consumer prices in the United States grew at an over-the-year pace of 8.6 percent in May, the fastest pace in around 40 years and above market expectations for an 8.3 percent pace of price growth.

The hot inflation print sent markets reeling and raised expectations that the Fed would have to hike rates faster and further in an effort to bring down the pace of price acceleration closer to its 2 percent target. Fed funds rate futures contracts are now seeing a 20 percent chance of a 75 basis-point move at the central bank’s upcoming policy meeting. If that prediction holds, it would make it the largest single-meeting rate hike in nearly three decades.

Still, the Fed is generally expected to hike rates by 50 basis points at its next meeting on June 14–15 and to follow that up with another 50 basis-point hike at its subsequent meeting on July 26–27.

“However, there is a debate as to what happens thereafter,” ING analysts said in the note. “Some officials want the Fed to continue with 50 [basis point] hikes to ensure inflation is brought under control, but this risks moving policy deeply into restrictive territory and heightening the chances of a recession.”

“Others argue that there is already evidence of the growth outlook weakening and inflation pressures tentatively softening, which could justify a pause in September,” they added.

One of those who expect to see inflation picking up its pace in June from May’s searing pace is Mohamed El-Erian, chief economic adviser at Allianz.

“Amplifying the economic/social/political discomfort, headline is a new high for this inflation cycle,” he wrote on Twitter on June 10. “Also, if the first 10 days of June are anything to go by, the next monthly measure would be higher.”

“It’s not surprising that #stocks and #crypto are attracting lots of attention this morning” in light of the scale of some pre-market moves on Monday he wrote in a June 13 tweet.

“But don’t ignore #bonds where some quite notable moves up in yields also include further inversions in parts of the curve,” he added.

Following last week’s inflation data, there were inversions in the 3-year/10-year and 5-year/30-year portions of the Treasury curve.

The U.S. economy contracted by 1.5 percent in the first quarter, with a recession generally defined as two consecutive quarters of negative economic growth.