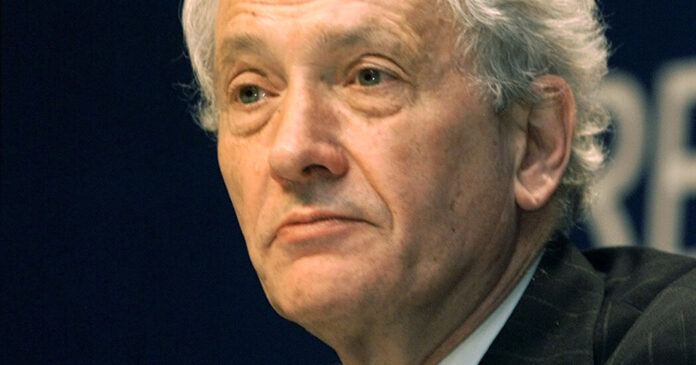 Kenneth W. Dam, who was deputy secretary of state when the Soviet Union began to implode during the Reagan administration, and who choreographed a global chokehold on funding for terrorist groups as deputy treasury secretary under George W. Bush, died on May 31 at his home in Long Grove, Ill. He was 89.

His death was confirmed by his son, Eliot.

Educated in a one-room schoolhouse in Kansas, Mr. Dam became a full professor at the University of Chicago Law School in 1964 and served through 2004, when he was named a senior lecturer and professor emeritus.

He was the university’s provost from 1980 to 1982 when Reagan recruited him to be deputy to Secretary of State George P. Shultz, his former colleague at the University of Chicago.

He and Mr. Shultz were credited with restoring stability to the State Department following the tumultuous tenure of Alexander M. Haig Jr. (who famously, and erroneously, declared, “I am in control here, at the White House” after President Reagan was shot in 1981).

They helped pave the way for détente between the United States and the Soviet Union, laying the groundwork for Washington’s embrace of Mikhail S. Gorbachev’s policies of glasnost and perestroika beginning in the mid-1980s.

Mr. Dam was recalled to Washington from his Chicago professorship and sworn in as deputy to Treasury Secretary Paul H. O’Neill less than a month before the Sept. 11 terrorist attacks on New York and Washington. He was then assigned to coordinate international initiatives by 130 nations to identify and eradicate the sources of financing for terrorist groups.

Hanna Holborn Gray, a former president of the University of Chicago, under whom Mr. Dam served as provost from 1980 to 1982, described him in a statement as “the most fair-minded of men” who “brought an admirable calm and exceptional judgment to it all.”

A skilled negotiator and an economics scholar, he also served as the arbitrator under the collective bargaining agreement between the National Basketball Association and its players from 1996 and 2001 and again in 2012.

He was IBM’s executive vice president of law and external relations from 1985 to 1992.

In 1992, United Way of America capitalized on Mr. Dam’s reputation for probity after the organization was shaken by revelations, in news reports and from an internal investigation, of expense account abuses that had subsidized the lifestyle of its longtime president, William Aramony. Mr. Dam was named interim president, charged with imposing financial oversight over the group to restore its creditability.

Kenneth Willard Dam was born on Oct. 8, 1932, to Oliver and Ida (Hueppelheiser) Dam in Marysville, Kan., near the Nebraska border. He was a grandson of immigrants from Germany and Denmark. His father was a grain and chicken farmer.

Mr. Dam practiced law in New York and returned to the University of Chicago as an assistant law professor in 1960. While traveling through Europe he became keenly interested in the United States’ role in rebuilding countries and their economies ravaged by World War II.

He was named a full professor in 1964 and later directed the school’s law and economics program.

His bridging of economics and law caught the attention of Mr. Shultz, who was then a professor of industrial relations and later became dean of the university’s Graduate School of Business. He lured Mr. Dam to Washington in the early 1970s after Mr. Shultz became director of the Office of Management and Budget in the Nixon administration.

Mr. Dam was the office’s assistant director for national security and international affairs from 1971 to 1973, when he was named executive director of Nixon’s White House Council on Economic Policy. In that post he was responsible for coordinating U.S. domestic and international economic policy.

In 1962, he married Marcia Wachs. In addition to his son, Eliot, he is survived by his wife; a daughter, Charlotte Dam; and two grandchildren.

When Mr. Dam first arrived in Washington after law school in 1957, “there was still a little bit of the farm boy about him,” Norman Dorsen, a fellow Supreme Court clerk and later a New York University professor and president of the American Civil Liberties Union, told The New York Times in 1982.

“He was not notably unsophisticated, but he viewed the world from a very solid Middle American perspective,” Mr. Dorsen said. He added, however, that after 25 years as a law professor, university official, author, world traveler and global economic expert, the man who was named deputy secretary of state had little of the farm boy left in him.