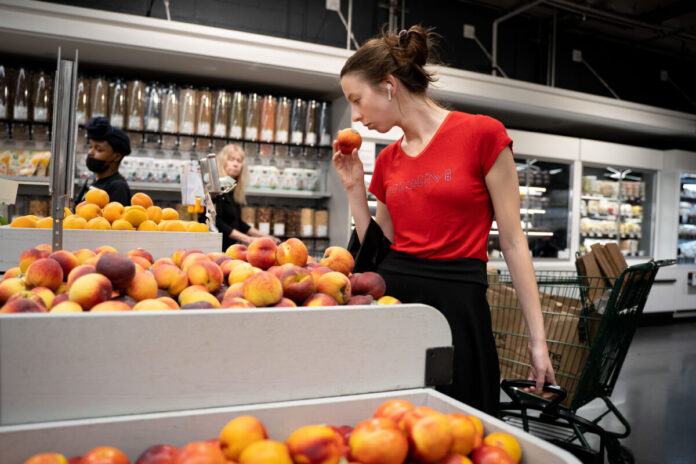 Inflation and spending expectations for the coming year hit a record high in May, as prices rose at the fastest pace in almost 41 years, the New York Federal Reserve reported in survey results on June 13.

The median one-year outlook for inflation gains increased to 6.6 percent in May, up from 6.3 percent in April, which is now tied with March as the highest on record since the survey was first taken on June 2013, according to the New York Fed.

The forecast for inflation on the three-year horizon remained unchanged at 3.9 percent, but a quarter of respondents expect prices to jump to a record 10 percent in the coming year.

Meanwhile, median home price expectations for the next twelve months came in at 5.8 percent, a decline from 6 percent in April, but they remained elevated relative to pre-pandemic levels.

Median household spending expectations for the next year rose by 1 percentage point to reach 9 percent from the previous month, up sharply from the 5.5 percent rate at the start of the year and almost double the 5 percent expectation from exactly a year ago.

The increase in home prices and household spending came as the consumer price index rose 1 percent from April and 8.6 percent from May 2021, the biggest increase since December 1981.

Many Americans said that they are worried about rising inflation and a potential recession in the coming months, as the rapid rise in food, energy, and housing costs are leading to the highest inflation rates in 40 years, putting additional pressure on the Federal Reserve to hike interest rates.

Consumer projections for the rise in the cost of food in the coming year were at 9.3 percent.

Both credit access perceptions and expectations have deteriorated, while households’ assessments of their current and future financial situations declined in May.

Only 36.2 percent of consumers expect the market to improve a year from now, a drop from the 37.9 percent expectation in April, a record low.

Expectations for the stock market also hit a record low, while job insecurity levels rose despite a robust hiring market and an increase of 390,000 in nonfarm payrolls for May, with an approximate 2-to-1 ratio of employment openings to available workers.

Those saying that they fear the loss of their jobs rose to 11.1 percent, well below the long-term average and the highest average since January 2022.

The expectations for the unemployment rate to rise next year increased to 38.6 percent, the highest level since February 2021.

More consumers for the fifth consecutive month have said that it is harder to obtain credit compared to a year ago in addition to higher prices.

Millions of Americans are increasingly starting to dip into their savings and relying more on credit to purchase everyday items, which could push the Fed to act more aggressively to curb consumer demand.

The number of respondents admitting that it was more difficult to obtain financing jumped to 11.4 percent in May, up from about 9 percent in April, to the highest level since October 2020.

A rising number of those surveyed aged 40 to 60 years saw an increased probability of missing a minimum debt payment over the next three months.

One in eight consumers in that age bracket expect a payment shortfall, the most since May 2020.