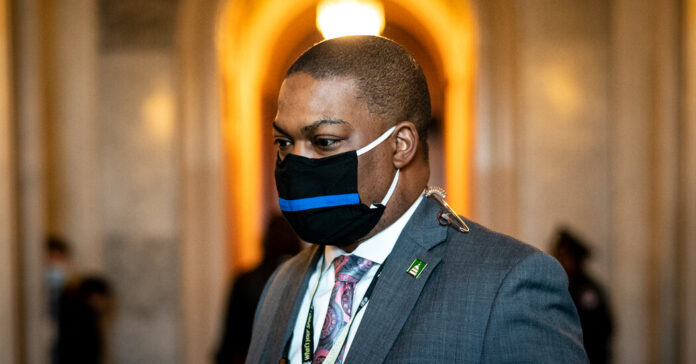 WASHINGTON—Eugene Goodman, the Capitol Police officer who led a pro-Trump mob away from the entrance to the Senate chamber during the Jan. 6, 2021, attack on the Capitol, testified for the first time on Monday about his experience holding off the rioters.

Officer Goodman, whose heroism was captured in widely circulated video recorded by a reporter inside the Capitol, said rioters sprayed him with what he believed to be bear spray, threw objects at him and tried to shake him and other officers off some scaffolding during the storming of the building. He also recounted throwing up in reaction to the tear gas deployed by the Metropolitan Police when they arrived to reinforce the Capitol Police, who had been overrun.

“It looked like something out of medieval times, where you see one big force fighting another force,” Officer Goodman said. His testimony came during the court trial of two men charged in connection with the riot, one of whom was photographed carrying a Confederate battle flag inside the building.

That man, Kevin Seefried of Delaware, and his son Hunter Seefried were charged with crimes including obstructing the final certification of the presidential election that was taking place by a joint session of Congress that day. The men’s attorneys did not deny that the father and son were the people identified in the evidence submitted to the court. It is the eighth trial to result from the attack on the Capitol; hundreds have been arrested.

Officer Goodman said he had attempted to prevent Kevin Seefried from progressing toward the Senate chamber and that Mr. Seefried had “jabbed” at him three times with the Confederate flag he was holding. Officer Goodman testified that he had told Mr. Seefried and the crowd several times to “get back,” but they did not comply. Although Officer Goodman had his gun, he said he had already used up his pepper spray and had earlier dropped his baton. He added that police radio communication was poor during the attack.

Mr. Seefried and his son were among the first to breach the building, by climbing in through a window that attackers in front of them had shattered. Officer Goodman said the mob in that first wave was “angry” and “aggressive,” with some shouting, “Where’s the meeting at?” and “We’re ready for war.”

Officer Goodman said that Mr. Seefried was being antagonistic to him and threatening when he first entered the building, saying “Where the F are the members at?” and, “What are you going to do — shoot us?” He added that Hunter Seefried appeared to be sly and “smirkish” during their interactions that day.

The video of Officer Goodman diverting the rioters from the Senate floor, where senators and the vice president were gathered, quickly went viral, making him into a reluctant hero. During Mr. Trump’s impeachment trial, yet another bit of footage surfaced showing Officer Goodman sprinting toward Senator Mitt Romney, Republican of Utah, to warn him of the coming mob and redirect him, sending the senator fleeing in the other direction.