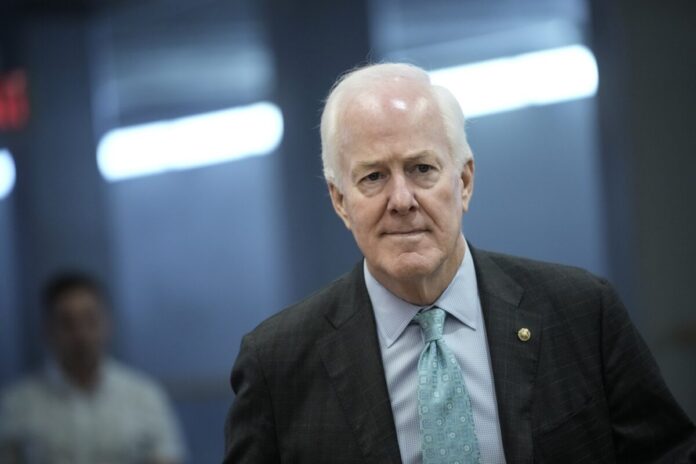 The Texas Republican was one of nine Republican senators, who on Sunday, joined 10 Democrats in announcing the package, which would place more restrictions on gun purchasers under the age of 21, pay for states’ implementation of red flag laws, and provide more spending for mental health and school safety measures.

When speaking to left-wing website Raw Story, Cornyn said that Biden got very little that he asked for in the bill. Over the past several weeks, Biden—who co-supported the 1994 Assault Weapons Ban—has called on bans on magazines holding more than 10 rounds and “assault weapons.”

“People are going to describe this the wrong way, but fundamentally this is about keeping our kids safe at school,” Cornyn told Raw Story Monday.

“Look at all the things that President Biden said he wanted,’” added the senator, who was tapped by Senate Minority Leader Mitch McConnell (R-Ky.) to help lead negotiations with Democrats following high-profile shootings in Texas, Buffalo, and Oklahoma.

But Cornyn stressed that “none” of Biden’s demands are in the bill. “But we’re going to focus on school safety and mental health, identifying these young men before they become dangerous, getting them treatment, or certainly, they go to buy a firearm accessing the state juvenile records to meet with an enhanced review makes a lot of sense,” he said.

According to a Sunday news release issued by 20 senators who back the bill, they are supporting the measure because “families are scared, and it is our duty to come together and get something done that will help restore their sense of safety and security in their communities.”

In a statement on Sunday, Biden said that he doesn’t believe the gun control package goes far enough but said he would sign it and urged Congress to pass it. The package was also praised by McConnell and Senate Majority Leader Chuck Schumer (D-N.Y.). Both Biden and Schumer suggested it would be the first step toward more gun control measures.

Despite Cornyn’s assurances, on social media, he and the nine other Republican senators have faced criticism from conservatives for joining with Democrats to craft the package.

“’Red flag’ laws are a weapon to use against anyone they decide to classify as mentally ill,” wrote Arizona GOP Senate hopeful Blake Masters on Sunday.

Added Rep. Thomas Massie (R-Ky.), “A federal red-flag law would create millions of second-class citizens. It won’t stop mass shooters but will deprive millions of Americans of due process and their Second Amendment rights.”

Pro-Second Amendment group Gun Owners of America said Sunday that Republican lawmakers are “getting nothing in return” while “compromising your rights” to own firearms.

“Federal dollars to bribe your state legislators into enacting unconstitutional ‘red flag’ laws, which could allow a court to seize your weapons, without any due process, simply based on anonymous tips,” GOA wrote in several Twitter posts.