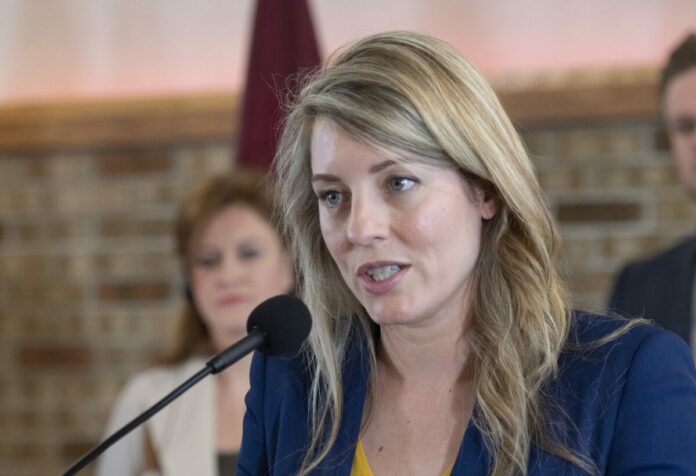 The presence of a Canadian diplomatic official at a Russian Embassy reception in Ottawa on June 10 was “unacceptable” says Minister of Foreign Affairs Mélanie Joly.

“Canada continues to stand with Ukraine as it fights against Russia’s egregious invasion.”

Joly was reacting to a story published in The Globe and Mail on June 12 that said Yasemin Heinbecker, the deputy chief of protocol at Global Affairs Canada (GAC), attended Russia Day celebrations at the embassy on June 10.

Russia Day is the country’s national holiday and marks the day, June 12, 1990, when Soviet leaders signed a declaration of Russia’s state sovereignty, which was one of the first steps towards the official dissolution of the Soviet Union.

June 12 this year also marked the 80th anniversary of diplomatic relations between Canada and Russia.

The Russian Embassy’s Twitter account noted on June 11 that its reception was attended by Canadian media and GAC.

The Globe reported other guests in attendance representing Egypt, Pakistan, and African countries.

Before Joly criticized the Canadian official for appearing at the event, her department’s media relations had defended Canada’s attendance at the festivities according to the Globe report, citing the need to maintain diplomatic relations.

The Epoch Times contacted GAC for comment but didn’t immediately hear back.

The Globe reported a Russian diplomat saying they appreciated Heibecker “honouring our reception.”

“We believe diplomacy is an all-weather instrument and diplomatic protocol is an important part of upkeeping the bilateral communications,” Vladimir Proskuryakov, deputy chief of the Russian mission, reportedly said.

The Canadian government has been highly critical of Russia’s invasion of Ukraine, imposing numerous sanctions on Moscow and providing assistance to Kyiv.

“These measures will reduce Russia’s ability to wage war and will send a clear message to the Russian regime: Canada will not back down in holding those responsible for the devastation in Ukraine to account,” says the June 8 GAC statement.

Reacting to the news, Conservative Party interim leader Candice Bergen reiterated her party’s position that Russian diplomats should have been expelled from Canada.

“Instead of endorsing the lavish, Kremlin-backed celebration at the Russian embassy, the Liberal government should be working with countries like Egypt, Pakistan and those in Africa to prevent Putin’s illegal war from causing a global food crisis which will hurt developing countries the most,” she said in a emailed statement to The Epoch Times on June 13.

“One does not break bread with war criminals,” says UCC CEO and executive director Ihor Michalchyshyn in a June 13 statement.