California to Launch 988, a New Mental Health Hotline Like 911 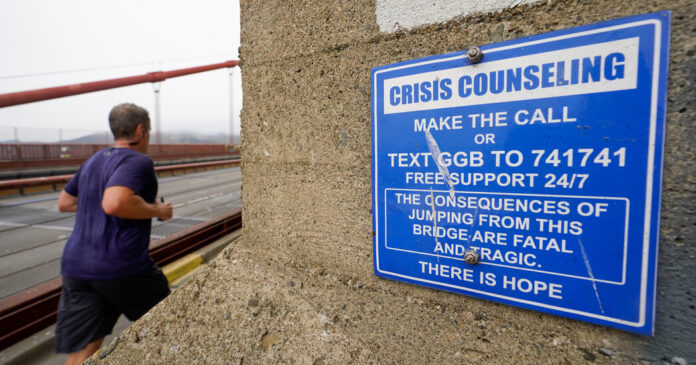 It’s Monday. California is preparing to launch a new mental health hotline. Plus, gas prices are higher than ever.

Californians dealing with mental health crises will soon be able to seek help by dialing 988, a new service expected to improve access to psychiatric care as rates of anxiety, depression and other disorders climb.

The hotline, akin to 911 but for psychiatric instead of medical emergencies, launches nationwide on July 16. But the rollout in much of the country, including California, has been far from perfect.

In October 2020, President Donald J. Trump signed bipartisan legislation allowing people to reach the National Suicide Prevention Lifeline, which has been around since 2005, by dialing 988. (The hotline’s current number is 800-273-8255.)

The easier-to-remember number is expected to lead to an influx of people seeking mental health help. But it has also led to concerns that call centers won’t have the infrastructure or staffing to handle the likely increase in callers, many of whom may be in crisis.

This month, the RAND Corporation released the results of a survey that found that fewer than half of public health officials nationwide were confident they were prepared in terms of financing, staffing and infrastructure. “Our findings have confirmed what many advocates and experts feared,” said Ryan McBain, a RAND policy researcher.

Last year, roughly 17 percent of calls to the existing hotline were abandoned before a caller could get help, according to a recent New York Times analysis. In California, that figure was between 10 and 15 percent, the analysis found.

“We know that it’s going to take time to build upon what was really a system that was under-resourced and quite fragmented,” Dr. John Palmieri, who is leading the Substance Abuse and Mental Health Services Administration’s 988 rollout, told my colleague Steve Eder.

In December, the Biden administration announced a $284 million infusion to upgrade infrastructure and fortify call centers nationwide. In California, officials promised an additional $20 million to the 13 public and private call centers that respond to hotline calls, “so we can meet Californians where they are and expand resources and support during these difficult times,” Gov. Gavin Newsom said in a statement.

The proposed state budget for the upcoming fiscal year, which is expected to be approved by the Legislature this week, includes another $8 million to help call centers with the rollout of 988. But some advocates say the funding remains insufficient.

The federal law that created 988 gave state lawmakers the option of raising money for call centers and other mental health services by levying a monthly fee on phone bills, but only four states have passed such legislation.

In California, A.B. 988 would create a telephone surcharge that would be capped at $0.30 per line per month, said Assemblywoman Rebecca Bauer-Kahan, the bill’s author. The tax would eventually bring in $194 million per year, which would help keep call centers staffed and pay for mobile crisis teams to respond to callers, she said.

“Like 911, 988 will be a forever system that individuals in mental health crisis have access to,” she told me. “Like our 911 system, it needs ongoing funding that’s consistent.”

“Hosp Grove is a eucalyptus tree-filled trail in Carlsbad where we walk our dogs. The eucalyptus is a natural flea detergent. We’ve lived in Carlsbad for 30 years and have enjoyed the crows’ antics, the strong and lovely smell of the trees, the friendliness of the community and the ease of access to a wonderful reprieve to nature.”

Summer is here. What’s your favorite part of the season in California?

Email us at CAtoday@nytimes.com with your stories, memories or recommendations.

If you haven’t done so already, this summer could be your chance to see the iconic presidential portraits of Barack and Michelle Obama.

The paintings, unveiled at the Smithsonian’s National Portrait Gallery in 2018, will be showcased at the de Young Museum in San Francisco starting on Saturday.

The artists, Kehinde Wiley and Amy Sherald, were the first African American painters to be commissioned by the Smithsonian’s National Portrait Gallery to create official portraits of a president or first lady. The works will be on view at the de Young through Aug. 14.

Thanks for reading. I’ll be back tomorrow. — Soumya

Briana Scalia, Mariel Wamsley and Jaevon Williams contributed to California Today. You can reach the team at CAtoday@nytimes.com.