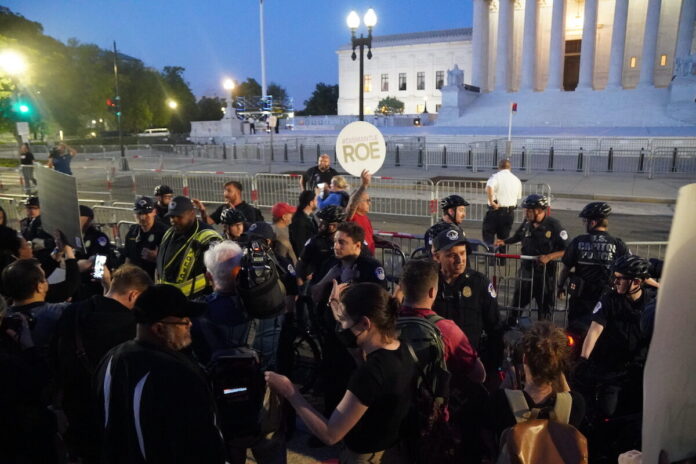 Authorities in Washington say they will increase their police presence and are urging visitors not to bring firearms into the city limits as the Supreme Court prepares to release several decisions on gun rights and abortion.

Groups are planning on holding rallies and protests ahead of the Supreme Court rulings, which are likely to happen this month. A draft of a Supreme Court ruling that appeared to overturn Roe v. Wade was leaked to the media several weeks ago, drawing left-wing protests, threats, and even several arson attempts against several pregnancy centers across the United States.

Metropolitan Police Chief Robert Contee said in remarks on Friday that a “posture of preparedness” is being implemented for upcoming events.

“We are increasing our presence to have coverage in neighborhoods and our downtown areas, which includes the activation of civil disturbance unit platoons,” he said at a press conference next to Democrat Mayor Muriel Bowser. “In addition, we are working closely with our law enforcement, government, and community partners to ensure that all of these events are peaceful and our neighborhoods are safe.”

Contee also warned people not to bring guns to upcoming events. An armed individual, 26-year-old Nicholas Roske, was arrested last week outside the Maryland home of Justice Brett Kavanaugh. He told investigators that he wanted to shoot Kavanaugh because he believed the justice would side with overturning Roe v. Wade and would side with a ruling that would relax some gun-control measures in certain states.

“If you’re coming to enjoy our beautiful city, individuals should not think to bring firearms into our beautiful city,” Contee said. “We need to help keep the peace in our city … leave the law enforcement and the firearms, leave that to the Metropolitan Police Department. That’s our responsibility.”

Bowser said that Washington residents cannot “live in fear,” adding that “we’re also asking each other to look out for our neighbors.”

Last week, the FBI said that it will not “tolerate violence, destruction, interference with government functions, or trespassing on government property” following Roske’s arrest and upcoming protests in Washington.

In a joint statement, U.S. Attorney Matthew Graves and Assistant Director in Charge of the FBI Washington Field Office Steven D’Antuono wrote that their agencies are “committed to protecting the First Amendment rights of all Americans to express their views peacefully during demonstrations that take place on a regular basis in the nation’s capital, including at the Supreme Court.”

In the case of Roske, he told investigators that he found Kavanaugh’s address online, according to court papers filed in his case. At the same time, leftist group “Ruth Sent Us” posted Kavanaugh’s address on its Twitter page, while suggesting that protesters target the children of Justice Amy Coney Barrett at their school.

Historically, the Supreme Court releases the majority of its decisions by the end of June. It’s not clear when the high court will render its final decision on Dobbs v. Jackson Women’s Health Organization—which may overturn Roe v. Wade, the landmark 1973 decision that argued women have the constitutional right to get an abortion—or on the New York State Rifle & Pistol Association v. Bruen, a case that, if struck down, would significantly expand the scope of protection afforded under the Second Amendment.